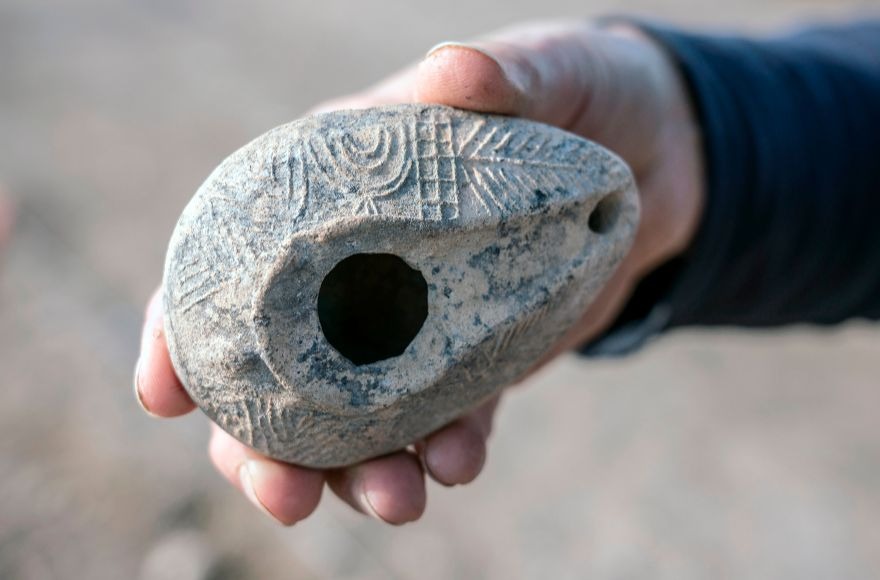 A 1,400-year-old oil lamp adorned with an eight-branched menorah which was exposed during excavations while preparing the Sanhedrin Trail in Isarel’s Galilee. (Yaniv Berman/Israel Antiquities Authority)

JERUSALEM (JTA) — Students working to build the “Sanhedrin Trail” in Israel’s Galilee unearthed a 1,400-year-old oil lamp bearing the symbol of the Jerusalem Temple’s menorah, according to the Israel Antiquities Authority.

“The discovery of a lamp decorated with a menorah, a symbol of the Jewish people, is without doubt exciting, especially at a site with such a unique heritage in part of the Sanhedrin Trail,” IAA archaeologist Dr. Einat Ambar-Armon, an expert on ancient clay lamps, said in a statement.

Thousands of students have worked for several months on what will be a smart trail, on which dozens of large “smart” stones will transmit relevant, useful information and activities directly to the hikers’ mobile telephones.

The nearly 45-mile long trail running from Beit She’arim to Tiberias across the lower Galilee is divided into five sections and traces the movements of the sages of the Sanhedrin, the Jewish tribunal that met in the ancient Land of Israel.

The trail will be inaugurated on April 22.

In addition to the oil lamp, the student volunteers have uncovered pieces of glass believed to date to the glass industry mentioned in rabbinical texts, and ornamental items dating back 1,800 years.  One student discovered a gold coin on the trail bearing an inscription of the sultan Suleiman the Magnificent, builder of Jerusalem’s city walls. Only two other such coins have been discovered.