Brooklyn synagogue pulls its money out of Chase bank to promote climate change. Will others follow suit? 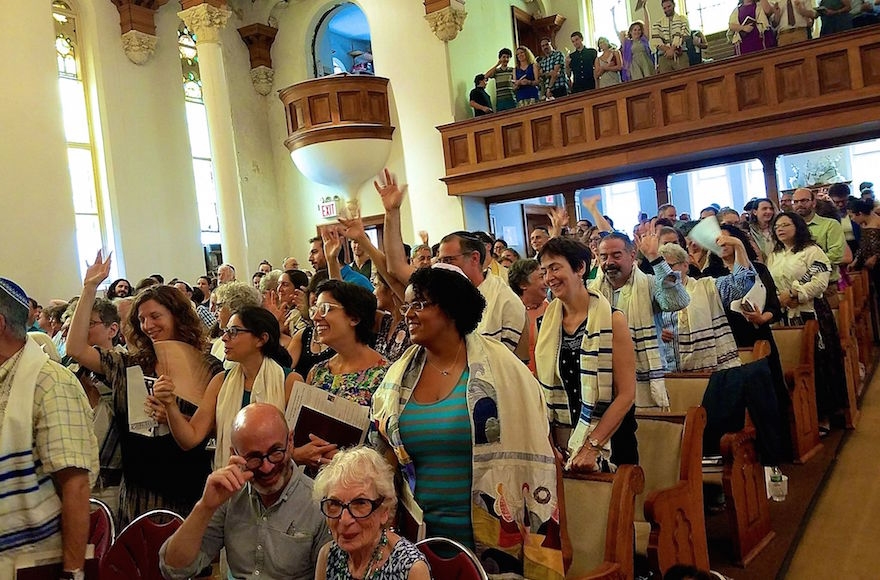 NEW YORK (JTA) —  Congregation Kolot Chayeinu in Brooklyn’s Park Slope neighborhood is removing its savings from JPMorgan Chase, making it the first U.S. synagogue to publicly divest from a bank or other corporation “to explicitly oppose the funding of fossil fuel and other related projects dangerous to the world in which we live,” according to a statement from the congregation.

The move also puts Kolot at the forefront of Jewish organizations in doing “values-driven investing,” putting money where Jewish groups’ mouths are on climate change and other environmental crises.

Leaders and members of the independent synagogue will gather Tuesday afternoon at Amalgamated Bank near Sunset Park to announce their divestment, and will be joined by New York City’s public advocate, City Council members and the chief of a nearby Native American tribe.

Amalgamated Bank, far smaller than JPMorgan Chase, originally was a union bank and is devoted to sustainable lending practices, according to Rabbi Ellen Lippmann.

While Kolot Chayeinu acknowledges that its modest funds — under $1 million — may not mean much to Chase, the largest bank in the United States, “we want to make a statement,” Lippmann said. The environmental group Oil Change International has called Chase “the largest U.S. funder of extreme fossil fuels.”

“After a period of getting involved with Water Protectors of Standing Rock and learning that there are banks that fund things like the Dakota Access Pipeline and Chase is one of them, we began to develop the idea that we’d like to bank in a place more in line with our values,” said Lippmann, referring to the crude oil pipeline routed through the Standing Rock Sioux Reservation and under a lake in North Dakota.

Standing Rock was the site of major protests in 2016 and 2017 by Native Americans and their allies.

American Jewish organizations lag far behind church groups and other investors in identifying and divesting from banks and lending institutions invested heavily in fossil fuels, even though umbrella groups like the Jewish Council for Public Affairs have long called for immediate action on climate action and carbon emissions.

“I’m sorry to say that Kolot Chayeinu is the first Jewish organization of any kind to move their money,” said Rabbi Arthur Waskow, director of the Philadelphia-based Shalom Center and a longtime environmental theologian and activist. “I’m pleased it’s Kolot, but if they had been the first three years ago and by now there were 100 synagogues and at least one major denomination saying its endowment fund was going to be moved, that would be far better.”

Still, more Jewish groups are getting on board with the idea of values-driven investing. Waskow would be pleased to find out that Avodah, a New York-based nonprofit that trains young Jewish leaders in social and economic activism, moved its savings from TD Bank to Amalgamated in 2017.

The JLens Investor Network has a $35 million advocacy fund in which Jewish individuals, family foundations and Jewish federations are invested, said Julie Hammerman, the network’s executive director and founder.

In December, JLens ran what it called a Jewish Impact Investing Summit in New York that attracted representatives of 84 Jewish groups. JLens provides educational and advisory services to both Jewish organizational investors and the companies in which they invest. 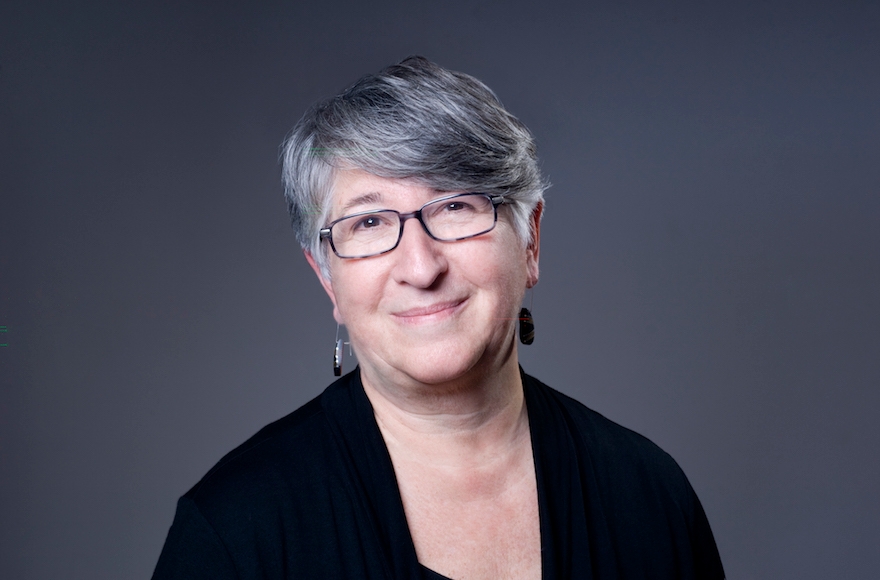 Rabbi Ellen Lippmann of Congregation Kolot Chayeinu: “We’d like to bank in a place more in line with our values.” (Courtesy of Lippmann)

Hammerman said that current thinking in the field argues against simply pulling money out of a bank. Investors in public companies prefer to try to change corporate policy from within by working behind the scenes and, if necessary, introducing resolutions at shareholder meetings.

“Divestment is the original approach, but the field has become much more sophisticated now and there are other tactics, like shareholder advocacy,” Hammerman told JTA. “Moving your money to a local bank that supports the things you value is an easy first step.

“I would definitely encourage anyone before divesting to reach out to the bank with concerns. We have relationships with over 300 organizations, including Chase. Lending practices is one of the areas where we try to move the needle.”

Other approaches to values-driven investing include putting money into “green bonds,” which take the proceeds to develop things like water reclamation and grasslands replenishment projects. Google has raised one to put solar panels on its campuses, said Fran Seegull, executive director of the U.S. Impact Investing Alliance, which is being incubated at the Ford Foundation. Starbucks has raised a green bond to create trade finance facilities for its coffee growers, she said.

“Green bonds has exploded and is now worth $90 billion,” Seegull said. “The growth rate has been extraordinary.”

Worldwide, more than one quarter of all professionally managed assets, or $23 trillion, is invested in expressly values-driven ways, according to Hammerman. In 2016, in the United States, nearly $9 trillion was invested in values-aligned ways, she said, citing a report by the U.S. Forum for Sustainable and Responsible Investing. That was up 33 percent over 2014, the report states. Its 2018 study is underway now, and expected to again reflect dramatically increased interest in environmentally and socially responsible investing. 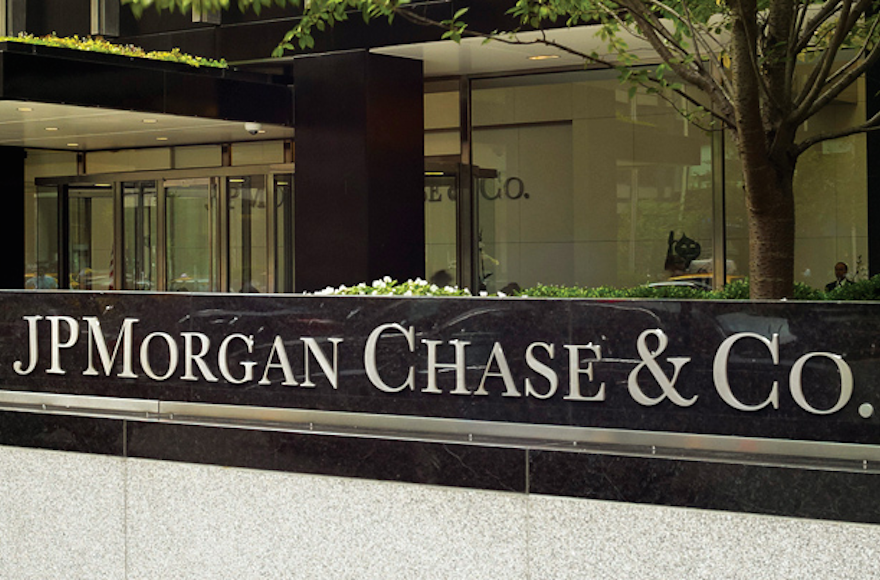 But the Jewish community has yet to catch up, many say, particularly when it comes to connecting its principles to action.

“The Jewish community is just frozen in a laudable but outdated past” when it comes to addressing environmental issues, Waskow said. “I am both proud and ashamed that the Shalom Center is the only national Jewish organization that has defined the climate crisis as the top issue.”

“The Jewish community has unfortunately shied away from divestment from fossil fuels, even though other religions have moved forward with having their money invested in a way aligned with their values,” Abramowitz said in an interview from his home in Israel. “You will have rabbis upset about President Trump pulling out of the Paris Climate Agreement, and yet allow their rabbinic pension funds to continue to invest in ExxonMobil and other fossil fuel companies that are the worst offenders.”

Perhaps the largest player in that sector is the Reform Pension Board, which manages $1.3 billion in retirement funds for Reform movement rabbis, educators and synagogue executives. The Pension Board just added a Jewish Values Investing fund to the other 13 options from which its members can choose to put their money. It launched for investors in January after a Jewish values-driven investing policy was approved by the denomination — American Judaism’s largest — in 2014.

The fund selects 250 companies for inclusion in its portfolio of stocks based on a range of values, said Michael Kimmel, the Pension Board’s executive director. Those values have been defined, he said, by resolutions issued over the past 100 years by the Union for Reform Judaism, the Central Conference of American Rabbis and the Commission on Social Action of Reform Judaism.

Companies engaged in the production of tobacco, civilian firearms, landmines, coal and other consumable fuels, as well as those involved in predatory lending, are automatically excluded, according to fund information. Then they are weighted based on criteria including environmental concerns, diversity, support for unions, human rights and stem cell research.

When it comes to the environmental screens, companies are graded on a range of factors, from the number of environmental fines they have incurred per dollar of revenue to whether they have disclosed a climate change policy. Kimmel said the fund gives extra weight to specific companies focused on generating energy from alternative sources, on energy efficiency, green building and preventing pollution. Companies with a relatively small carbon footprint based on the amount and intensity of their emissions also get extra points.

Yet on its fact sheet, the fund names Chase as one of the top 10 companies in which it has invested.

“We partner with an outside firm to build the fund,” Kimmel said when asked about Chase’s inclusion despite the criticism it gets from environmental groups. He was referring to Aperio, a company that creates what its website calls “hyper-customized portfolios designed to meet the specific goals and values of advisors and their clients.”

The fact that this is, as JLens’ Hammerman says, “a new field,” may help explain why performance doesn’t always measure up to stated goals.

Kimmel told JTA that Aperio’s “research and methodology in many cases discerns companies’ environmental practices. Their research doesn’t go to the level of lending practices of financial institutions. Over time and as we develop more experience with the fund, we may be able to drill down further to make additional decisions to invest or not invest in a particular company.”

“The Jewish community is missing out on the amazing leverage we could have from the 95 percent of our communal funds that are in investments” not aligned with our values, said Energiya’s Abramowitz. If Jewish organizations’ endowments and other investable funds were deployed to produce positive change in addition to profit, he said, “we could be even larger engines of change and reflectors of our values.”