In Krakow, Jews celebrate their community’s ‘revival’ amid rising xenophobia 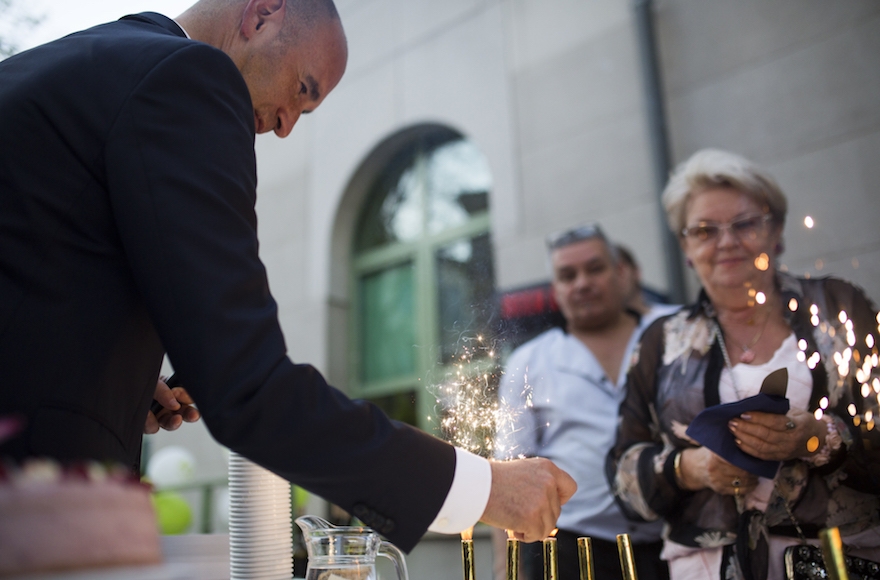 KRAKOW, Poland (JTA) — At one of Poland’s plushest synagogues, leaders of this city’s small but vibrant Jewish community welcomed visitors from around the world to a celebration of what the hosts call their minority’s “revival” in this country.

The occasion for the party Sunday at Tempel Synagogue was the 10th anniversary of the adjacent Jewish Community Center of Krakow, located in the heart of the city’s historic Jewish quarter, Kazimierz.

Since its opening in 2008, the three-story building, with its club for some 60 Holocaust survivors and newly opened Jewish kindergarten, has become a symbol for the return of Jewish community life to the city near Auschwitz, where the Nazis obliterated centuries of Jewish presence.

“As we have grown, we have also been able to share the story of Krakow’s Jewish revival with hundreds of thousands of visitors,” a beaming Jonathan Ornstein, the New York-born director of JCC Krakow, told the 200 people attending the anniversary party. “Thank you for letting me be a part of the bright, beautiful Jewish future we are building together.”

Many of Krakow’s hundreds of Jewish residents acknowledge the progress made since communism, which drove underground what little remained of its Jewish community. But not all of them share Ornstein’s optimism in a country whose nationalist government recently unleashed what critics say is one of the worst waves of anti-Semitic rhetoric in decades. 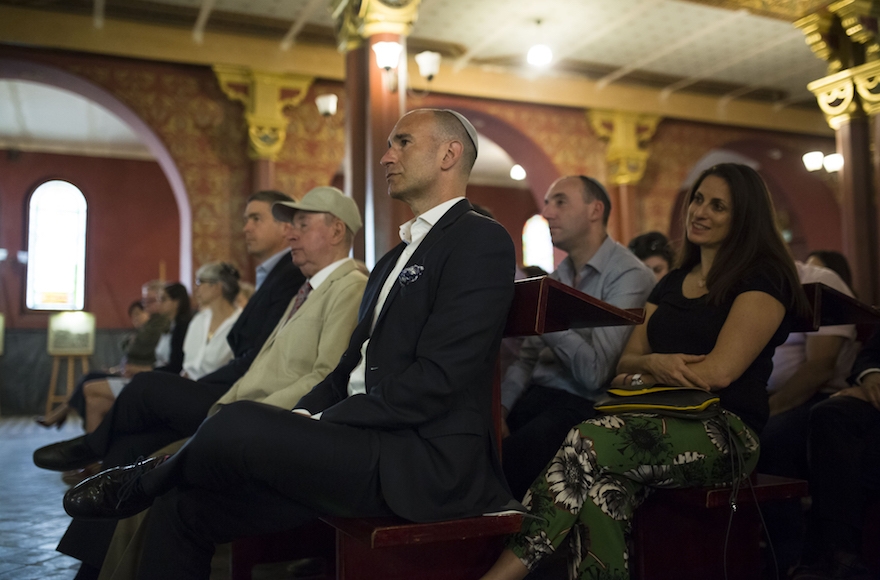 Several blocks away from the JCC, volunteers of the Czulent association of Jewish young professionals are converting the cellar of their building — a former apartment synagogue, or shtiebel — into what Czulent founder Anna Makowka-Kwapisiewicz calls a “safe space.” It’s essentially a room where Jews can hole up in the event of an emergency.

“It’s not something I thought I’d be doing in Poland even five years ago,” she said about the shelter.

Makowka-Kwapisiewicz said her confidence began to recede two years ago, when five men harassed and intimidated Jewish boys playing at a playground in a poor area of Krakow because one was wearing a kippah. One of the men spat on a Jewish child at the playground while shouting at both kids.

The boys’ parents never pressed charges, which is why the incident was not widely reported in the media, said a mother of one of the boys, according to Makowka-Kwapisiewicz, who works for an international nonprofit.

Since the fall of communism, such incidents were unheard of in Krakow, a tourist magnet for its Jewish heritage sites and one of the few old Polish cities that was spared major damage during World War II.

The city celebrates its ancient Jewish heritage at the annual Jewish Festival, one of the largest events of its kind in Europe. The city’s seven large synagogues – of which three are active – swing open their doors for one night a year, attracting thousands of visitors.

On the way to the nearby museum on the grounds of the former Auschwitz death camp, hundreds of thousands of tourists pass through Krakow’s picturesque streets, some of them featuring Jewish-flavored shops and restaurants with Yiddish signs. Many visit the grounds of Oskar Schindler’s factory, where the German industrialist saved hundreds of Jews.

The playground incident came one year after the 2015 election of the right-wing Law and Justice party, which some leaders of Polish Jewry and others accuse of encouraging or tolerating a wave of xenophobic incidents, including against Jews.

The taboo on open expressions of hatred toward Jews in Poland, where the Nazis killed millions of Jews in the 1940s, began to loosen in 2015, said Makowka-Kwapisiewicz. That year, a far-right activist burned the effigy of a haredi Orthodox Jew during a march against Muslim immigration in Wroclaw.

“I never expected I would live in such circumstances,” she added.

More recently, in November, tens of thousands of nationalists marched through Warsaw shouting “Jews out” and other racist slogans while carrying banners against Islam. Two weeks after the march, a Warsaw mosque that for years was targeted with threats was vandalized.

“When places of worship are being attacked, we need to prepare,” Makowka-Kwapisiewicz said of the shelter her group is preparing. 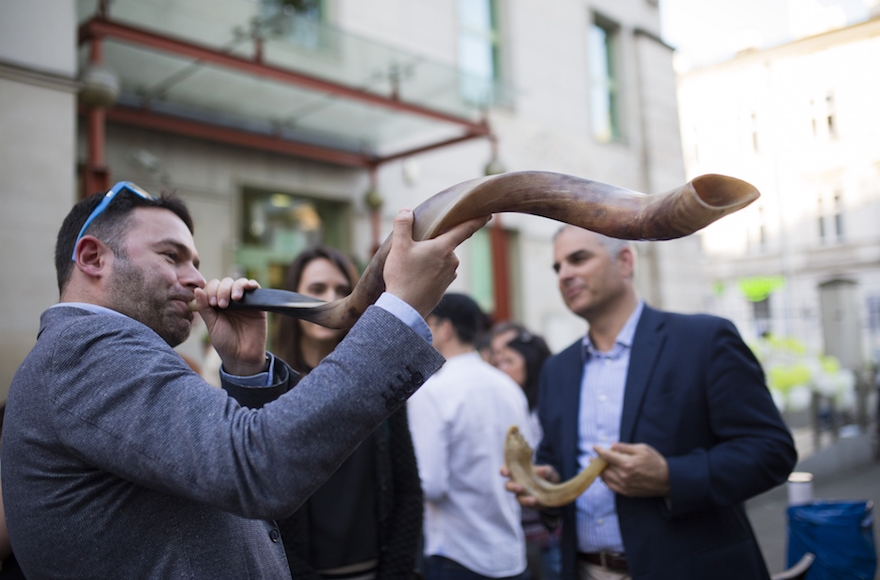 A participant in the 10th anniversary celebration of the JCC Krakow blows a shofar, April 22, 2018. (Jakub Włodek)

Against this backdrop, the president of the Union of Jewish Communities in Poland, Leslaw Piszewski, and Anna Chipczynska, who heads the Warsaw community, wrote last year to a founder of Law and Justice to say that they are “appalled by recent events and fearful for our security as the situation in our country is becoming more dangerous.”

Things went from bad to worse following a row between Poland and Israel over Warsaw passing a law in January that criminalizes blaming the Polish nation for Nazi crimes. The dispute unleashed the worst wave of anti-Semitism since the fall of the Iron Curtain, according to Rafal Pankowski, co-founder of the Polish anti-racism group Never Again.

In the wake of the fight over the law, he told JTA: “In the space of one month, I have seen more anti-Semitic hate speech than in the previous 10 years combined.”

At least one person reported an assault that he suspected was anti-Semitic: The Catholic journalist Bogdan Bialek said he was attacked by a person who shouted about Bialek’s efforts to commemorate victims of an anti-Semitic pogrom in Kielce in 1946.

Poland lacks a systematic effort by the state to collect data on attacks against minority groups, according to Amnesty International, “meaning that authorities have no way of knowing the scope of the problem,” the group said.

The tsunami of hate speech about Jews was conducted mostly on social networks, where calls to “stuff TNT up Pankowski’s ass” and “punch him” were recorded after a government official singled him out for attack on Twitter.

But since January, several Polish politicians and prominent figures have joined the Twitter rabble.

Beata Mazurek, the spokeswoman for Law and Justice and a deputy parliament speaker, favorably tweeted a quote from a Catholic priest who said that the Israeli ambassador’s criticism of the Holocaust bill “made it hard for me to look at Jews with sympathy and kindness.”

TVP, a public television station, aired an interview with a priest who said that the Jews’ perception of the truth is whatever is “beneficial” to them or Israel. And the Do Reczy conservative weekly published a drawing showing two silhouettes — one bearing a swastika and the other a Star of David — pointing a gun at a third figure emblazoned with the Polish flag.

Last month, Kornel Morawiecki, a former senator whose son, Mateusz, became prime minister last year, said in an interview that Jews moved gladly into ghettos during the Holocaust to avoid having “to deal with those nasty Poles,” as the ex-senator put it.

Government officials have consistently vowed to act tough on nationalist extremism, “but at the same time they are encouraging it, creating a schizophrenic attitude,” Makowka-Kwapisiewicz said.

Ornstein, the JCC director, acknowledges that there have been isolated incidents of anti-Semitism in Krakow over the years, but says the alarm of those like Makowka-Kwapisiewicz is “not at all mainstream.”

“The idea of building a ‘safe house’ today in Krakow is absurd. By and large, the Jews here feel safe and don’t anticipate needing such a space any time soon,” he wrote in an email. “This past Shabbat, I was in and out of synagogue all day. No one bothered me as I wore my kippah, there were no security guards and no metal detectors, and our prayers could be heard by anyone walking by on the street.”

Many Poles still say their country is safer for its religious minorities than many Western European countries, where Islamists and other extremists are responsible for hundreds of physical assaults on Jews, including deadly ones.

“OK, the situation is less comfortable than one year ago,” Peter Nawrocki, a 44-year-old computer science university professor, told JTA at the JCC celebration. “Extremists are a problem. But this is not France.”

Nawrocki is confident that Poland is good place to raise his 1-year-old son, Shimon.

“I think Poland is one of the safest places in Europe to be Jewish,” he said, citing the absence in recent years of a violent hate crime attack on a Jew.

Anna Swies, a Jewish-American investment consultant with Polish roots, traded Chicago for Krakow six years ago and married a local man. She said she feels “connected” to her true identity here. Having a luxury Jewish kindergarten for her two children, aged 4 and 6, for a fraction of what a comparable institution would cost in the United States “also helps,” she said.

But like Makowka-Kwapisiewicz – she said she would like to leave at least for one year or two — other JCC regulars are having a tough time envisioning a future for themselves here because of rising xenophobia.

Serhii Chupryna, a Ukrainian-Jewish student who settled in Krakow in 2013 for his studies, said he feels significantly less comfortable living in Poland than he did when he first arrived. As a gay man, “I feel like I’m everything the ultranationalists here hate rolled into one person,” he joked. Adding that “Ukraine is no better,” he said he plans to save some money and move to Israel in a few years.

The JCC, with an annual budget of $1.5 million,was set up with help from the World Jewish Relief group in the United Kingdom and the American Jewish Joint Distribution Committee. Chupryna said it has become “something of a safe space” amid growing expressions of hostility.

The current reality in Poland makes the JCC’s mission “even more critical,” said Dan Rosenfield, the chair of the World Jewish Relief group, which provides the institution with $140,000 annually.

In recent weeks, “things have calmed down a little bit” when it comes to expressions of anti-Semitism,  Ornstein told JTA. But even at the height of the anti-Semitic wave, Krakow Jews have not experienced direct assaults, he added.

Nonetheless, young people who are now discovering their Jewish ancestry – many Jewish Poles hid it during communism – “are starting to question their place in Poland moving forward,” he said.

The new challenges, Ornstein suggested, “are a reminder of how we’ve taken for granted all these incredible positive changes in Poland. When something bad happens, it’s shocking for us, which is maybe a sign of how good we’ve come to expect things to be.”