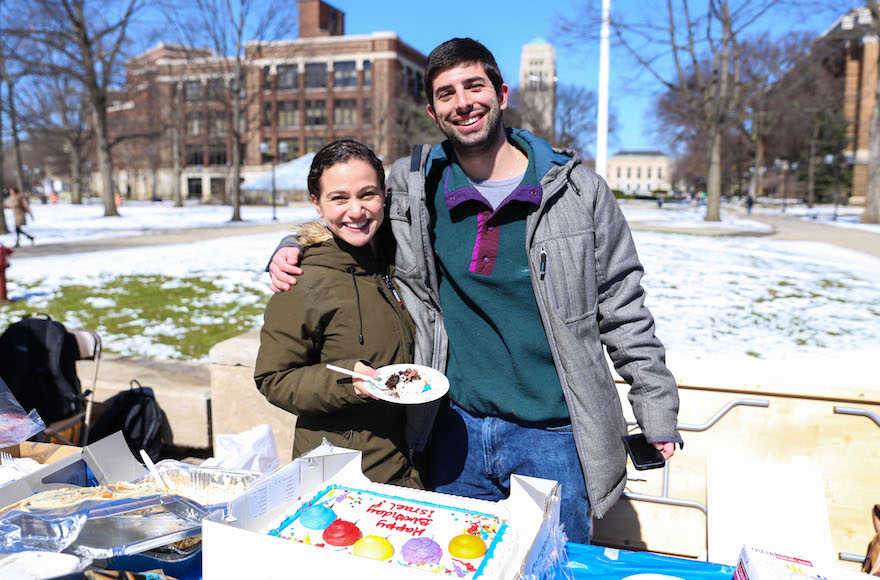 (JTA) — We are Jewish and pro-Israel students who are active within our Jewish communities on college campuses across North America. Many of us have helped organize against the Boycott, Divestment and Sanctions-affiliated movements throughout our time on campus.

Over the course of our time fighting BDS campaigns, Canary Mission was brought to our attention repeatedly. Canary Mission is an anonymous site that blacklists individuals and professors across the country for their support of the BDS movement, presumed anti-Semitic remarks and hateful rhetoric against Israel and the United States.

As a group of conscientious students on the front lines fighting BDS on our campuses, we are compelled to speak out against this website because it uses intimidation tactics, is antithetical to our democratic and Jewish values, is counterproductive to our efforts and is morally reprehensible.

This blacklist aggregates public information about students across the country under the guise of combating anti-Semitism. It highlights their LinkedIn profiles, Facebook pictures, old tweets, quotes in newspapers and YouTube videos. The site chronicles each student’s involvement with pro-Palestinian causes and names other students and organizations with whom the given student may be affiliated.

We view much of the rhetoric employed to villainize these individuals as hateful and, in some cases, Islamophobic and racist. In addition, Canary Mission’s wide scope wrongfully equates supporting a BDS resolution with some of the most virulent expressions of anti-Semitism and anti-Israel rhetoric and activity.

Throughout our time on campus, many among us have been active in the fight against BDS. Some of us have campaigned against BDS, others have vigorously spoken out against BDS, and some have even cast votes on our central student governments against BDS. We have opposed, and continue to oppose, BDS because we believe that BDS delegitimizes the State of Israel, aims to isolate it as a pariah, paints the Israeli-Palestinian conflict as a zero-sum and oversimplified issue, continually reinforces double standards and polarizes our campuses in the process.

Given our experiences on our campuses, we believe that the best way to combat such ideas is through open discourse and critical analysis of the issues surrounding the conflict.

That said, we condemn all forms of hate in the strongest possible terms, which includes any and all anti-Semitic rhetoric used by some pro-Palestinian activists.

However, we believe that promoting a negative perception of Muslims, particularly Muslim students on our campuses, as Canary Mission does, is similarly hateful. As students on the front lines, we hope that Jewish and pro-Israel communal organizations will trust us and work more collaboratively with us to handle this fight in a credible, respectful and moral manner among our student communities. We believe that Canary Mission is antithetical and destructive to our shared cause of supporting Israel and eliminating anti-Semitism on campus. Instead, we expect credible Jewish and pro-Israel communal organizations to help us combat anti-Semitism on college campuses, and around the world, in a diplomatic manner that seeks to protect our community rather than shaming the other side anonymously, as Canary Mission does.

We wish to highlight how counterproductive this blacklist is to our efforts refuting BDS on campus. In some cases, such as at the University of Michigan, fear of being blacklisted led pro-BDS students to successfully argue in support of a secret ballot, which made student government members less accountable to their fellow students. It also granted them anonymity to vote in favor of seemingly advancing Palestinian human rights while disregarding the nuance of the conflict.

At George Washington University, not only did the student government plan to hold a secret ballot, but the extremist tactics used by Canary Mission discouraged pro-Israel students from wanting to fight BDS due to fear of association with the shadowy blacklist. Canary Mission obstructed pro-Israel George Washington students from pursuing inclusive and respectful dialogue to combat BDS.

It seems that somewhere along the way, a disconnect has formed between the goals of our Jewish peers and institutions (to combat anti-Semitism and create a positive campus climate) and the true impact of their efforts. Unfortunately, the disconnect has created a situation in which we feel the Jewish values we hold deep, such as “loving our neighbors as ourselves” and “all of Israel being responsible for one another,” are being misrepresented and perverted.

It is time to bridge that gap. As students devoted to this issue, we will work to promote strong education and programming around Israel that does not demonize one side over the other. We will work to figure out how we can share our passion for Israel with others at our universities while fostering a positive, inclusive and educated student body. Finally, we will work to call out anti-Semitism for what it is, in all of its modern nuanced forms, and hold our fellow students and professors accountable for their remarks and actions.

However, we are disappointed that in many of our conversations with other organizations, we have been told that the organization is tied, unable to say or do anything because of their donors. This lack of moral compass cannot go on. It is time that we strengthen our backbone and stand true to our Jewish values by wholeheartedly condemning Canary Mission and pursuing justice for all.

If you find this issue concerning and/or are interested in speaking more about it or getting involved in our efforts, please reach out to jpgold@umich.edu and gabilana@umich.edu.

University of Maryland: Terps for Israel

This letter was also signed by 107 students at seven universities, who unlike the organizers of Canary Mission are proud to share their names.