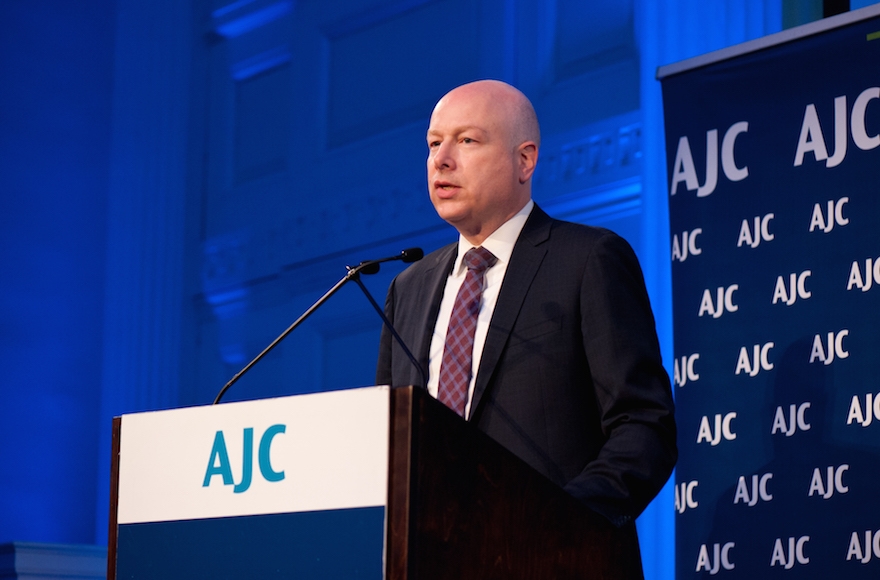 “Hamas and other terrorist groups have spent their energy and resources encouraging Palestinians in Gaza to stage protests and throw rocks and Molotov cocktails at the border fence,” Greenblatt said Tuesday here in a speech at the American Jewish Committee’s women’s leadership board spring luncheon. “In some cases Hamas use the protests as cover to attack Israeli troops and plant bombs along the border fence.”

Greenblatt did not speak about the Israeli army’s actions in response to the protests in recent weeks; the international community has condemned the response. Thirty-nine Palestinians, including a journalist, have been killed by Israeli fire and hundreds wounded amid the protests, according to Haaretz. The demonstrations followed a call by Hamas officials for protests against Israel and are calling for the return of Palestinian land.

At the event Greenblatt, a longtime lawyer to Trump, shared his perspective about the current situation in the Middle East. He said some “good news” in the region includes opportunities for Israel to forge better ties with other Arab countries.

Egypt, Jordan, Saudi Arabia and the United Arab Emirates “increasingly look to Israel as a security and economic partner. These ties can serve as a model for future collaboration that benefit all and lead to closer regional ties,” Greenblatt said.

Greenblatt, who declined to answer questions from reporters, praised the president for recognizing Jerusalem as Israel’s capital and said that ties between Israel and the United States are more robust than ever.

“The president treats Israel the way a valued friend and partner should be treated, and the U.S.-Israel relationship under President Trump is stronger than it has ever been before,” he said.

Greenblatt blamed instability in the region on Iran, which he said was “increasingly emboldened and aggressive,” and expressed hope that the U.S. could one day “can resume our historic friendship with the people of Iran.”

He also shared stories of meeting with Israelis and Arabs of different backgrounds, including comforting families who lost relatives in terror attacks and hosting five young Palestinians for a Shabbat dinner with his family in Jerusalem.

“These experiences have shown me that so many of us share the same hopes, dreams and aspirations,” he said.

Greenblatt, who is Orthodox Jewish, said religion has helped him relate to others he met in his current position.

“There is a deep religious element to this conflict to both sides, and as people of faith we’re able to better understand one another and sincerely appreciate the deep convictions that guide our lives and decisions,” he said.

The Teaneck, New Jersey, resident said he brings his own religious, family, personal and career background to the negotiating table.

“I bring to every meeting and conversation, both formal and informal, all of the things that are important to who I am as a person,” Greenblatt said. “I am an observant Jew, the son of Jewish Hungarian immigrants who escaped both the horrors of the Holocaust and the tyranny of communism in Europe. I’m a husband and I’m a father of six. I have spent a quarter of a century working in the legal and business worlds.”