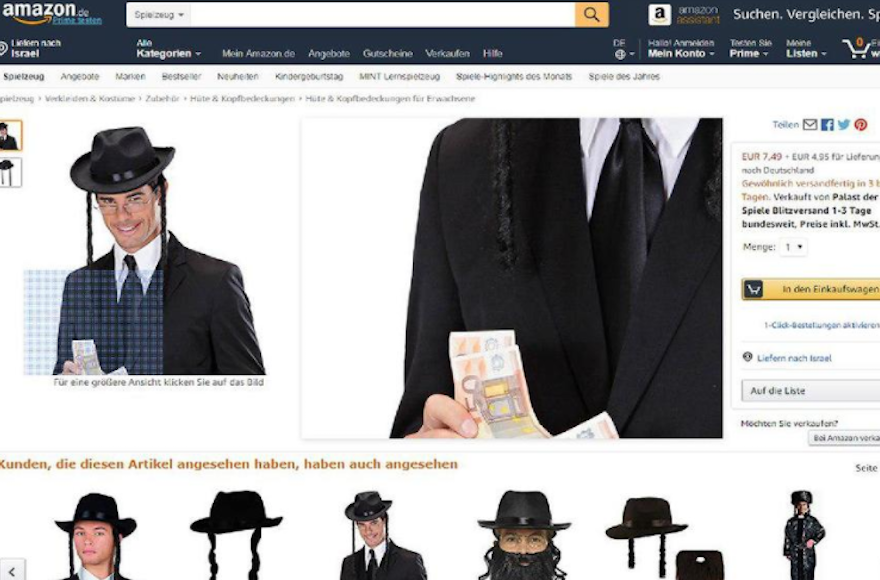 (JTA) – Following complaints, a picture of a model holding money while wearing a rabbi costume was pulled off the Amazon Germany shopping website.

The ads for the costume — a black hat with synthetic sidelocks that costs up to $20 — appeared on the German-language version of Amazon up until last week, the news site Ynet reported Thursday. The retailer who sells the costumes also sells fake beards, the report said.

Separately, a Thailand-based online retailer was selling yellow stars emblazoned with the word “Jude” — German for Jew – as a fashion accessory. “Looks perfect on Jeans, jackets, clothes, vests, hats and bags,” the retailer, using the name virginshop_9, wrote on eBay.com.

The Nazis made Jews wear yellow stars in the 1930s and 1940s. The retailer selling the yellow stars had his ad for that product taken offline.

The news about the items on sale on Amazon’s German edition and on eBay coincide with several statements by leaders in Europe against anti-Semitism.

French President Emanuel Macron and Belgian Prime Minister Charles Michel both said Thursday that Jews are an integral part of their respective societies and they that they as leaders would act tough on hate crimes against Jews. And in Berlin, 2,000 people, many of the not Jewish, marched while wearing a kippah this week.

These gestures and others follow the assault in Berlin on April 17 of an Arab Israeli who wore a kippah to test attitudes toward it. He was assaulted on April 17 by an attacker shouting “Jew!” in Arabic. In response, Josef Schuster, president of the Central Council of Jews in Germany, publicly advised Jews to avoid wearing kippahs in urban settings.