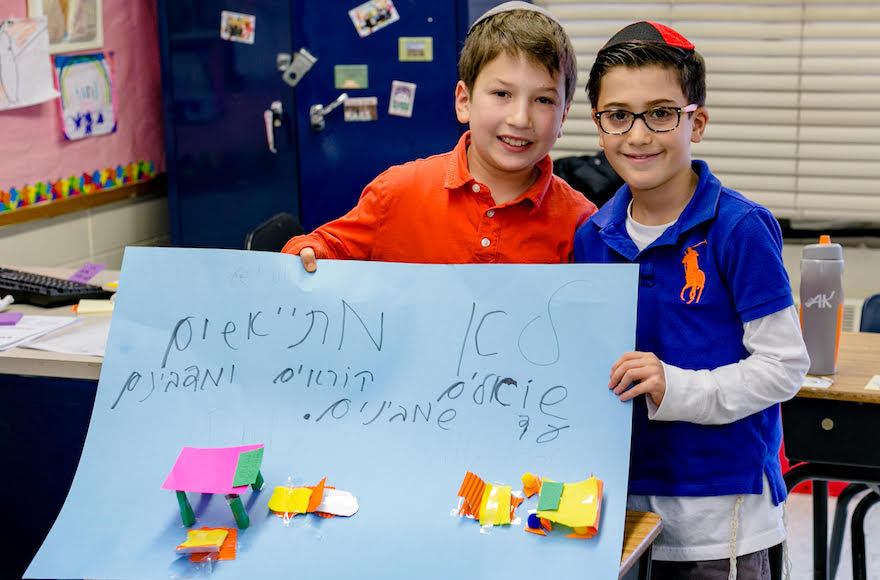 Hillel Torah North Suburban Day School in Skokie, Illinois, provides its students with several hours of fully immersive Hebrew instruction each day. The sign these children are holding reads "We don't give up. We ask, read and talk until we understand." (Courtesy of Hillel Torah)
Advertisement

Teaching students Hebrew is a top priority for the Chicago-area day school Hillel Torah. So to ensure it has a ready supply of native Hebrew speakers on its faculty, the school goes straight to the source.

It recruits two couples from Israel for multiyear teaching gigs, flies them to Chicago and puts them up in rented homes. A parent committee makes sure the houses are appropriately furnished and the refrigerators fully stocked. Volunteers take the couples to open bank accounts and offer tours of Chicago. A schedule is created to ensure they are never without a Shabbat meal invitation.

And after they finish their stint at the school — in as little as two years, but never more than four — the process begins again.

It’s a costly effort, but one that Hillel Torah North Suburban Day School in Skokie, Illinois, believes is necessary to provide its 430 students with several hours of fully immersive Hebrew instruction each day. Until the fourth grade, all Judaic studies — Bible, Jewish law, Hebrew language — are conducted entirely in Hebrew. The school also recruits local Israelis to teach.

“It requires a tremendous commitment — a financial commitment, and also energy and resources to sustain the Hebrew program,” said Menachem Linzer, Hillel Torah’s head of school. “It’s one of the things that attract people to our school.”

The investment appears to be paying off. 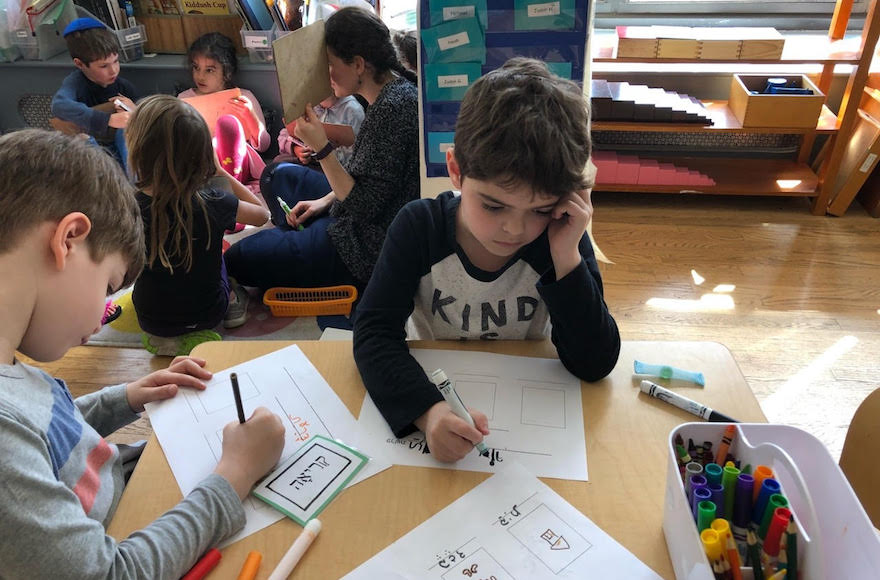 Several years ago, Luria Academy in Brooklyn, New York, decided to revamp its Hebrew instruction after determining that, despite the fact that Hebrew proficiency was part of its mission, students were not acquiring strong Hebrew skills. (Courtesy of Luria Academy)

Most graduates are fluent Hebrew speakers, often with a pitch-perfect Israeli accent. Some have transitioned immediately into Israeli schools after their families immigrated to Israel. A few years ago, a parent of an eighth-grader who was a neurosurgeon delivered a lecture about brain science at the school — entirely in Hebrew.

Hebrew language instruction is ubiquitous in Jewish day schools. According to the authors of a 2017 study by the Avi Chai Foundation, it’s practically the only curricular element held in common by day schools that span a wide spectrum of Jewish ideological outlook and practice.

But the study also identified substantial differences in how and why Hebrew is taught — and how much success schools have achieved.

Among the key findings is that in schools where students expressed high levels of satisfaction with Hebrew language classes, three features made a difference: communicating that Hebrew matters, strong leadership and investing in resources. These elements were found to be more important than the specifics of how Hebrew is taught and with what materials.

“These institutional commitments indicate that the schools are not simply going through the motions when it comes to Hebrew; they are not simply doing what is expected of them,” reported the study’s authors, consultant Alex Pomson and Jewish education scholar Jack Wertheimer.

Day schools cite a variety of reasons for prioritizing Hebrew — from instilling a Zionist ethos to giving students the means to understand Jewish religious texts.

Susie Tanchel, head of the Jewish Community Day School in Boston, says Hebrew is critical because it’s the language of the Jewish people, enabling access to sacred texts and conversations with Jews from around the world. Also, she says, learning a second language enhances neurological development.

The Boston school uses a two-teacher model. In the younger grades, each classroom has both an English- and a Hebrew-speaking teacher, and the language of instruction shifts depending on which teacher is leading a particular activity. The school’s method of language learning is known as the proficiency approach, which considers what learners can do with a language in real-life settings, not how much they know.

“We fundamentally believe that children are integrated human beings,” Tanchel said. “So we don’t want to divide the day into Hebrew in the morning and English in the afternoon because you don’t live like that.”

Integration is also guiding principle at the Luria Academy in Brooklyn, a Montessori school in which there are no neat divisions between subjects. Classrooms typically have multiple teachers who pull aside small groups of students for short lessons.

Several years ago, Luria realized that even though Hebrew proficiency was part of its mission, students were not acquiring strong Hebrew skills. So the school added a Hebrew speaker to every classroom who could offer instruction in Hebrew regardless of the particular lesson. When the first class of students who started the revamped program as 2-year-olds reached kindergarten, Luria found it had to rewrite its Hebrew curriculum because the students were two levels beyond where they had been before. 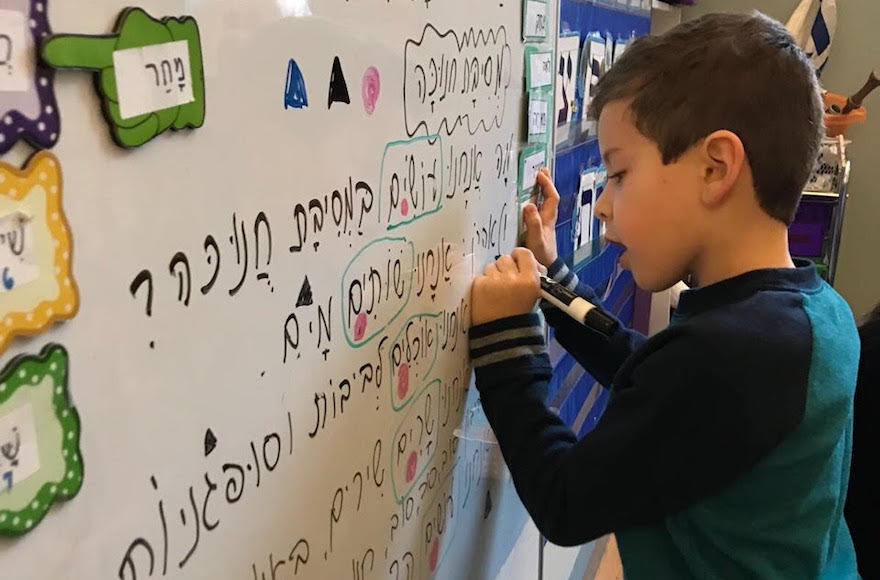 After Luria Academy put a Hebrew teacher in every classroom to offer instruction in Hebrew regardless of the subject, the school had to revamp the rest of its Hebrew program because students became fluent so quickly. (Courtesy of Luria Academy)

“If we’re going to be true to our mission, our mission includes Hebrew language immersion. We believe it’s a necessary part of being an educated Jew,” said Amanda Pogany, Luria’s head of school. “For us, we want to graduate students who have access to the texts of the Jewish people. And to really do that, and do that well, we felt like they just had to speak Hebrew.”

“I think we hold the record of day schools in the United States for shlichim couples,” said Saul Zucker, Ben Porat Yosef’s head of school, using the Hebrew word for emissaries.

From the time students enter pre-kindergarten until eighth-grade graduation, Judaic studies are conducted entirely in Hebrew and taught by native speakers. Nothing is ever translated into English.

“It’s done the same way that you and I learned our first language,” Zucker said. “It’s exposure to language and immersion into the language with context clues, with non-verbal cues. And the students pick it up — including the Israeli accent. So by the time they get to middle school, the students are amazingly proficient.”

Zucker calls commitment to Hebrew one of the “inviolable mantras” of the school.

“This is who we are. If you’re coming to BPY, it’s because you buy in enthusiastically to this mission,” he said. “It is a core value to have our children really live the idea of a unified Jewish people with a strong identification to the State of Israel, and you can’t do that without giving them fluency in Hebrew. It’s the language that binds us together.”