A pro-Israel leader mocked Natalie Portman as beautiful but not ‘too bright.’ Twitter wasn’t amused. 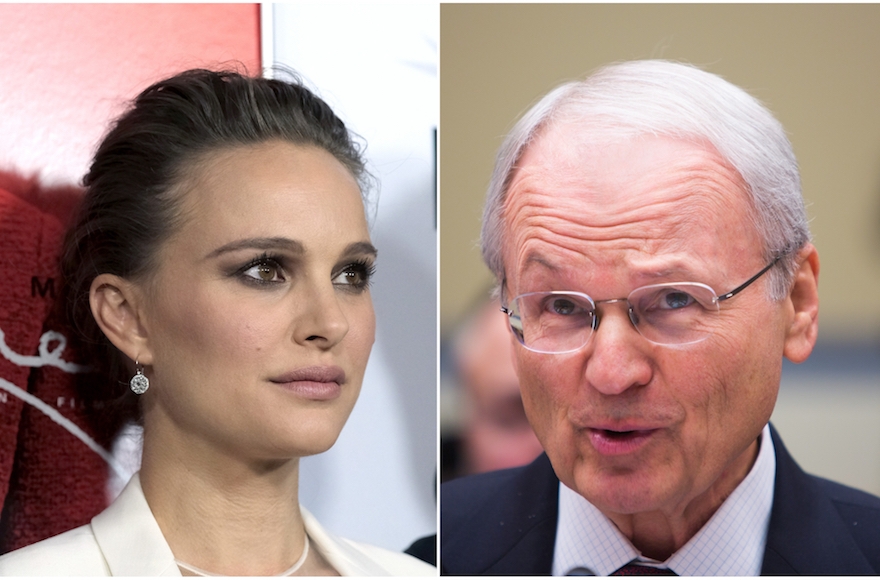 Morton Klein, head of the Zionist Organization of America, called out Natalie Portman for her recent comments on Israel. (Getty Images)
Advertisement

Klein is the president of the Zionist Organization of America, which strongly supports the Jewish settlements in the West Bank and rejects the two-state solution. He came under social media fire on Wednesday after he posted a tweet blasting the Jerusalem-born actor and director for her refusal to accept a prize in Israel because it would mean sharing a space with Prime Minister Benjamin Netanyahu, whom she apparently holds responsible for the killing of Palestinian protesters on the Gaza Strip border in recent days.

Natalie Portman’s absurd,uninformed,inaccurate,dangerous views on Israel,while ignoring the antiSemitic,pro-terrorist views/actions of Hamas and Palestinian Authority gives credibility and legitimacy to the ludicrous,false,nonsensical belief that beautiful women aren’t too bright

The reaction was pretty fast and also furious.

Rabbi Denise Eger, the immediate past president of the Central Conference of American Rabbis, asked, “Really? This is how you talk about women? [T]ime for Mort to step down if he can’t treat or talk about Jewish women appropriately.”

Libby Lenkinski, the vice president for public engagement at the New Israel Fund, said in an email, “With all the hand-wringing about the lack of women in top leadership roles in major Jewish institutions, the answer is right in front of our faces: chauvinism is rampant, excused, and totally allowable.”

Can't say I'm surprised by this breathtakingly misogynist @MortonAKlein7 tweet on Harvard-educated #NataliePortman, whom he reduces to a "beautiful woman." https://t.co/xASKYwuiyo

I talked to Klein, opening our conversation like this: What if someone prominent had, during the Bernie Madoff meltdown, said something like, “the convicted fraudster ‘gives credibility and legitimacy to the ludicrous, false, nonsensical belief’ that Jews are thieves?”

At first, Klein insisted that he was being deliberately misread: He was saying that it was “ludicrous, false and nonsensical” that pretty women aren’t smart. He was only saying Portman was stupid.

“I condemned it,” he said, referring to the belief that pretty women are stupid. “I think what she did was stupid and insensitive and wrong.” It was, he said, “a partial tongue-in-cheek witticism.”

OK, then, why bring it up at all? Who was out there saying, “Gee, give Portman a pass, she’s so pretty she must be stupid?” I hadn’t seen that argument.

Because, Klein said, it was clear to him that Portman was awarded the Genesis Prize in part because of her looks.

“One of the reasons she got this is she’s a beautiful actress, and I said what I said,” he said.

I asked him how he knew she was awarded the prize because she was “beautiful.” Portman is an A-lister who makes no bones about her Israeli identity: She was born there, has acted in at least two and directed one movie set in Israel, in Hebrew. Alan Dershowitz tapped her as a research assistant when she was a Harvard undergrad for a book about Israel. She arguably has stronger claims to one of the prize foundation’s criteria — “engagement and dedication to the Jewish community and/or the State of Israel” — than previous recipients like Michael Douglas and Anish Kapoor.

Klein swore to me he was not aware of Portman’s adaptation in 2016, as a director and star, of the famed Israeli novelist Amos Oz’s “A Tale of Love and Darkness.”

“How am I supposed to know everything?” he asked.

I also asked the ZOA chief if remarking on a man’s looks would be appropriate, just because he is an actor. Richard Gere, for instance, has been sharply critical of Israel; no one would deny that he got into the business decades ago in part because of his classic good looks. The same could go for any number of male entertainment figures who are Israel critics.

Klein, again, said he did not know about Gere. And he wanted to make sure I knew that at least four of his executives at ZOA are women.

“To call me a misogynist is totally absurd,” he said. “Susan B. Tuchman,” who directs the ZOA’s Center for Law and Justice, “works for me, and she is a very attractive woman and she’s smart.”

After considering the idea for a while, Klein also allowed that he would not be offended had someone made similar remarks about Madoff, such as, he said, “It’s a shame that Bernie Madoff since he’s a Jew would give credence and legitimacy to the false absurd notion that all Jews care about is money.”

Klein’s reassurances are unlikely to persuade his fiercest critics.

Rabbi Jill Jacobs, who directs T’ruah, a rabbinic human rights group usually on the opposite side of ZOA on Israel, said his remarks were typical of a dynamic within Israel and the pro-Israel community to deny women agency when it comes to pronouncing on security issues.

“There is a misogyny that enters the Israel conversation and a shutting down of women that women can’t be smart enough and knowing enough to talk about certain issues like security,” she said.

I reminded her what Klein had said about the female executives at ZOA.

“I can’t comment on what it’s like to work for him in his office,” Jacobs said. “But if I had a superior running around making comments about women’s appearances, it would not make me feel like it was a safe working environment.”