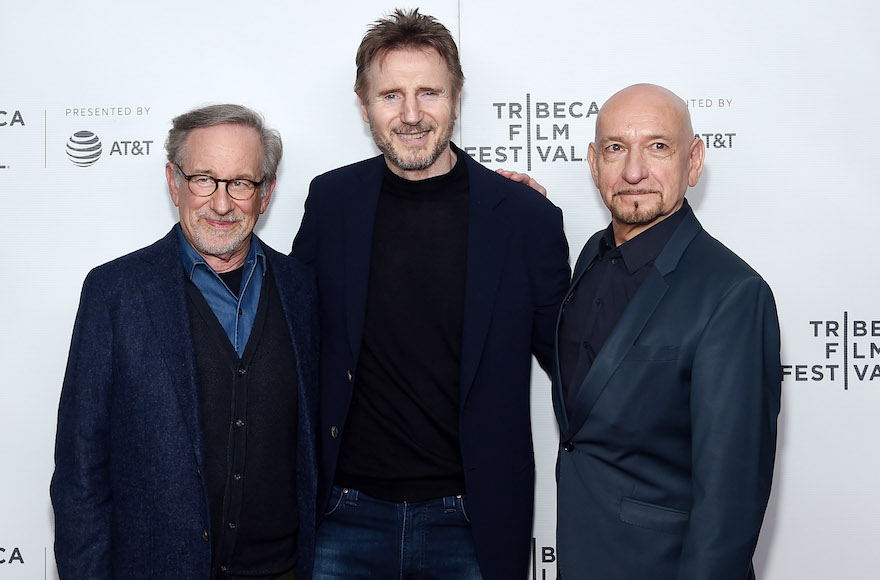 NEW YORK (JTA) — Out of all his celebrated films, Steven Spielberg is most proud of “Schindler’s List,” the 1993 Oscar winner about a German businessman who saved over 1,000 Jews during the Holocaust.

The filmmaker made the claim at a Tribeca Film Festival event on Thursday marking the film’s 25th anniversary that brought him together with actors Liam Neeson, Ben Kingsley and others involved in the movie.

After a screening of the film, Spielberg said during a Q&A session that it was the first time he had watched the movie with an audience since it debuted in 1993, according to The Associated Press.

The filming, which took place in Poland, took a toll on Spielberg and some of the cast, the director revealed. Neeson, who starred as Oskar Schindler, found the process “dangerous and unforgettable”; Spielberg needed regular calls from his friend Robin Williams to cope with the experience.

“Robin knew what I was going through, and once a week, Robin would call me on schedule and he would do 15 minutes of stand-up on the phone, and I would laugh hysterically, because I had to release so much,” Spielberg said.

Two young Israeli actors had “breakdowns” on set after the filming of a scene in which Jewish women thought they were going to be killed in an Auschwitz gas chamber. Spielberg called the day in which actors were asked to strip naked before being marched around the camp set one of the most difficult of his career.

“There was trauma everywhere. You can’t fake that,” Spielberg said.

Spielberg and the crew experienced anti-Semitism firsthand during filming as well. Swastikas were painted near their set at one point, and Kingsley (who played Schindler’s Jewish accountant) stood up for an Israeli actor in a bar after a German-speaking man approached and asked if he was a Jew.

Spielberg, who said the process of making the film brought his “Jewish life pouring back” into his heart, also said he thinks Holocaust education should be more universal in the U.S.

“It’s not a pre-requisite to graduate high school, as it should be,” he said. “It should be part of the social science, social studies curriculum in every public high school in this country.”

‘Schindler’s List’ at 25: How Steven Spielberg’s deeply Jewish story spoke to the masses