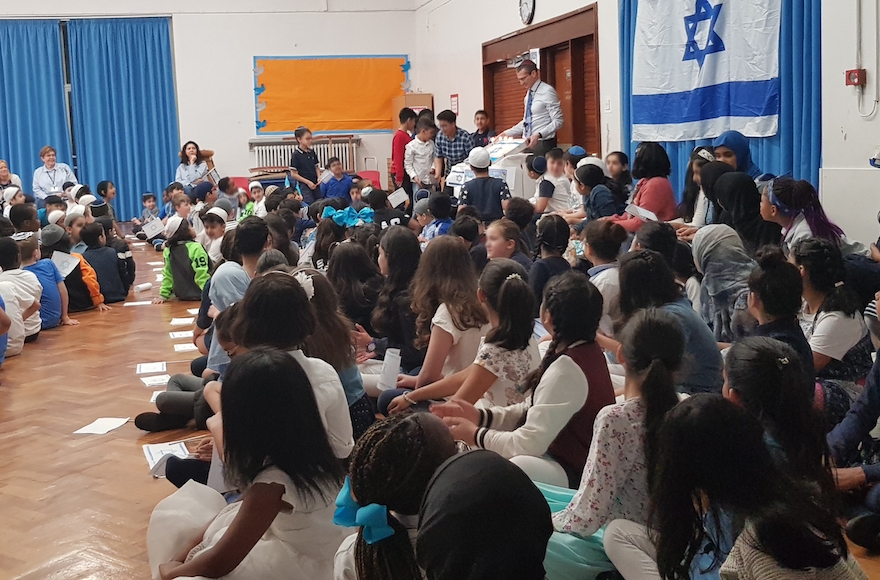 But the King David is not like most other Jewish schools.

Most of the dozens of students in the 53-year-old elementary school in a suburb of this gritty English city come from Muslim families — the result of a decades-long depletion in the size of most Jewish communities outside London and growing immigration from South Asia and the Middle East. According to parents and community observers, 80 percent of the students are Muslim. The school declined to comment.

On Israel’s Independence Day, which this year fell on April 19, Esther Cohen, King David’s head of religious education, kicked off the ceremony in the school gym with the Modeh Ani morning prayer in Hebrew followed by the Shema Yisrael prayer.

The student body, hand-drawn Israeli flags at their feet, dutifully recited the words. Then they closed their eyes for what Cohen called “tefillah to Hashem,” Hebrew for “prayer to God.” Most of the boys were wearing some sort of head cover — some kippahs and others the larger Muslim skullcap called taqiyah. Many girls also wore hijabs, the Muslim head cover for females.

Cohen showed the students two videos celebrating Israeli innovation and invited them to another tefillah, this time to “thank Hashem that he gave us Israel.” She asked the students to stand up to sing “Hatikvah,” which speaks of “being a free People in Zion, Jerusalem” — almost all of them sang the Hebrew-language anthem by heart.

Finally, the students were given permission to wave the flags after having been told not to fidget with them for the ceremony’s duration.

Ruth Jacobs, chairwoman of the Representative Council of Birmingham and West Midlands Jewry, describes the surreal reality on display at King David with typical British understatement.

“It’s a bit of an anomaly, really,” she told JTA of the school attended by both her children and grandchildren. “It’s an interesting scenario and a funny thing to see those Muslims saying Shema in the morning prayer.”

Rabbi Gideon Goldwater heard about King David long before he enrolled one of his two daughters there last year after moving here with his family from their native London to serve as the local director of Aish Hatorah, an Orthodox Jewish organization. The school once had an entirely Jewish student body, but he said that changed “as demographics changed.”

“I’ve always said this is a fascinating place, you won’t find this sort of situation elsewhere,” Goldwater said.

Despite this unusual twist, King David makes perfect sense to some Muslim parents, they said.

“It is a Jewish school but regardless of that, I think it’s a very good school,” said Fouad, a medical professional whose family is originally from Pakistan and whose daughter attends King David. “The best thing about it is that it has discipline that other schools lack. There’s zero violence, there’s very little bullying. It’s just not tolerated here.” Fouad asked to be identified by his first name only.

Fouad, whose son graduated from King David, said the family’s “ideal school” would have been the Church of England school, but “it’s very hard to get into,” he said. His family heard of King David from friends. He and his wife decided to go for King David after visiting another prospective school, where a student gave them the middle finger.

Whereas excellent private schools are easy to find, non-Jewish parents are drawn to King David also because it’s a public faith-based school where admission is free. (In contrast to the United States, public funding for religious-based schools is allowed and widespread in the U.K.) The curriculum is determined by a foundation affiliated with Birmingham’s 162-year-old Singers Hill Synagogue. But it also complies with state Education Ministry pedagogical requirements that include tuition-free schooling of approximately seven hours per day.

King David students are not taught about any other religion besides Judaism, according to Jacobs. Everybody celebrates Jewish holidays together and Shabbat. Each Friday features a kiddush ceremony ahead of the Jewish day of rest. But she said Jewish students receive more in-depth tutoring about Judaism that the non-Jews may skip. All the students also study some Hebrew.

Not all the non-Jewish parents at King David initially were as comfortable as Fouad.

“Before I put my kids here, actually I wasn’t sure how I would feel about it,” said Runila, a mother of two students attending the school.

Runila, whose family comes from India, pointed at the Israel flag painted, alongside the British one, on the wall of the play yard.

“I was concerned about indoctrination, but the Jewish education here is pretty mild,” she said. “I’m comfortable with it now.”

Among Jewish parents, too, King David took some getting used to.

“This is the only Jewish school in Birmingham, so it’s also the best,” said Goldwater, the Aish rabbi from London. Asked about the quality of religious studies at King David, he said “The Jewish education is what it is.”

But in terms of general education and pedagogical approach, “this school is really solid,” he added. “We’re impressed.”

Although Birmingham is Britain’s second largest city with 1.1 million residents, it has fewer than 1,700 Jews who are permanently based there, according to a 2015 census by the Institute for Jewish Policy Research. Another approximately 500 Jews lived in the city as students attending the local university, the report said.

But 70 years ago, Birmingham “thrived as a provincial Jewish center” with many thousands of Jews, Jacobs said. The city, once an industrial hub, even used to have what the community now calls on its website a “Jewish area” where low-income families, many of them immigrants from war-torn mainland Europe, led “a ghetto-like existence.”

In addition to that population, tucked into the bustling red-brick streets and alleys around the Bull Ring indoor market, with its smells of seafood and exotic vegetables, Birmingham also had more integrated Jews who settled in leafy suburbs like Moseley. That’s where King David is located.

But in the 1980s, many thousands of Jews left for London and Manchester, a communal decline that changed other large Jewish communities in Britain like Leeds, Bristol and Liverpool.

Jacobs’ council lists only four synagogues — three in Birmingham and one in the suburb of Solihull.

“When I was young, there were lots of children,” said Jacobs, the leader of a community that she characterizes as “graying.” She doubts there are even 100 Jewish children living in Birmingham today. Her own grandchildren, who lived in Birmingham until recently, were the only ones in her synagogue, save for the rabbi’s kids. Ruth Jacobs’ daughter moved to Israel. Her son recently left for Leeds.

When her two children attended Kind David, Jacobs said, their classroom of 30 students had 24 Jews. Now there are one to three Jewish children per classroom at the school, she said.

Jacobs said she finds the decline depressing, but not irreversible. She noted that Manchester also had a dwindling Jewish population that is growing now thanks to rising housing prices in London. The same could happen to Birmingham as Manchester slowly becomes less affordable, she said.

“This place has everything necessary for a great, strong Jewish community: a Jewish school, a large university, synagogues and even a Jewish old-age home,” she said. “Now we just need nice, young Jewish families.”

The Only Jewish Boy at Jewish Day School