3 Jewish groups are accusing ZOA of defamation. The Zionist group is bringing its own charges. 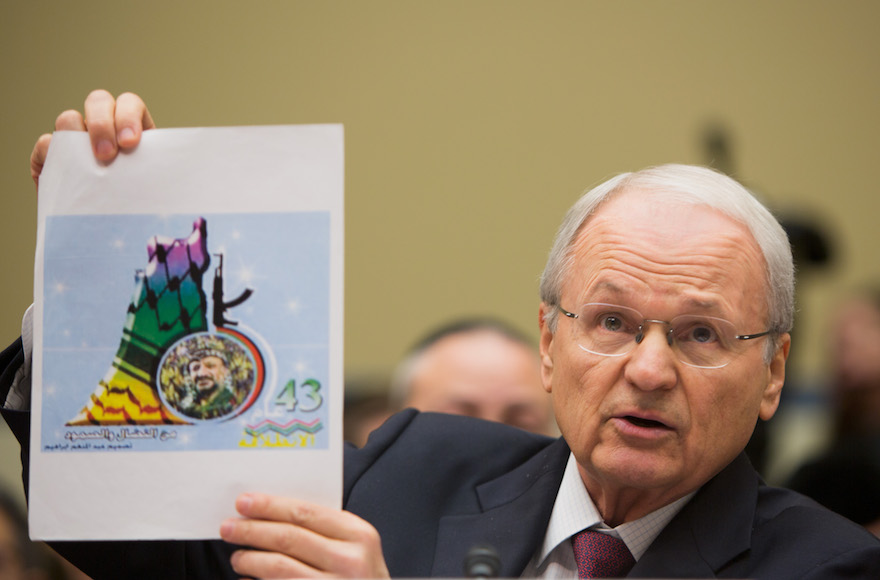 Morton Klein, head of the Zionist Organization of America, at a hearing on moving the U.S. Embassy in Israel to Jerusalem on Capitol Hill, Nov. 8, 2017. (Tasos Katopodis/Getty Images)
Advertisement

NEW YORK (JTA) — Three Jewish organizations are accusing the Zionist Organization of America of inappropriately criticizing them. And the ZOA is accusing one of them right back.

On Wednesday, the various spats will have a formal hearing at a committee meeting of the Conference of Presidents of Major Jewish American Organizations, an umbrella association for Jewish groups. The Presidents Conference by-laws, according to the Forward, prohibit its members from attacking each other with “insults, ad hominem attacks, and name calling,” as well as criticisms that are “false, inaccurate or unfairly exaggerated.”

The Presidents Conference, which has over 50 organizations, aims to speak in a unified voice for the American Jewish establishment. The non-disparagement policy is meant to prevent discord among groups that sometimes differ widely on foreign and domestic affairs.

Three groups — the Anti-Defamation League, the National Council of Jewish Women and the refugee aid group HIAS — have lodged separate formal complaints under that policy against the ZOA, a right-wing pro-Israel organization. In turn, the ZOA has lodged complaints against the ADL as well as Ameinu, a liberal pro-Israel group.

All the disputes will be judged by the committee in the formal, private hearings.

The complaints are confidential, and the three groups accusing the ZOA either declined to comment on the record or did not respond to JTA inquiries. The Presidents Conference also did not respond to a request for comment. But multiple officials with knowledge of the complaints confirmed to JTA that the hearings are taking place.

ZOA President Morton Klein called the complaints “nonsense” and denied that his group had done anything wrong.

“A number of organizations have complained that we have criticized them too harshly, claiming that that violates the rights-and-responsibilities statement of the Conference of Presidents,” Klein told JTA on Monday. “We’ve not called anybody names, ever. We’ve never said anything false.”

In recent years, the ZOA has released public statements criticizing the three groups for taking liberal positions. The ZOA supports Israeli settlements, opposes Palestinian statehood and has supported policies of President Donald Trump with which the groups have taken issue.

A November news release from the ZOA condemned HIAS and the National Council of Jewish Women for signing “a shocking letter signed by extremist ‘Jewish leaders'” in defense of Palestinian-American liberal activist Linda Sarsour. The following month, another ZOA statement on the same topic called those groups “far left.”

The ZOA has gone after the ADL for years, criticizing it publicly for everything from supporting Syrian refugees to denouncing those who oppose a Palestinian state. ZOA has also rapped the ADL for supporting Black Lives Matter. The ADL has said that while it supports better treatment of black Americans, it opposes the Movement for Black Lives due to its 2016 platform accusing Israel of apartheid and genocide.

“ADL’s attacks on dedicated pro-Israel individuals and groups that defend and fight for Israel and combat anti-Israel radical Islamist anti-Semitism are particularly confusing, disheartening and upsetting,” read an April 27 ZOA news release. “It is also painful that ADL and its Director [Jonathan] Greenblatt too often join forces with Israel haters, such as by promoting the Israel-bashing BDS group Black Lives Matter.”

If the Presidents Conference rules against the ZOA in the hearings, the ZOA could face a range of consequences — from a private or public reprimand to a recommendation of suspension or expulsion. But Klein remains defiant.

“What kind of ruling [is that], that we can’t say whatever we think is right?” he asked. “I’m not going to agree to be restricted from saying what I believe.”