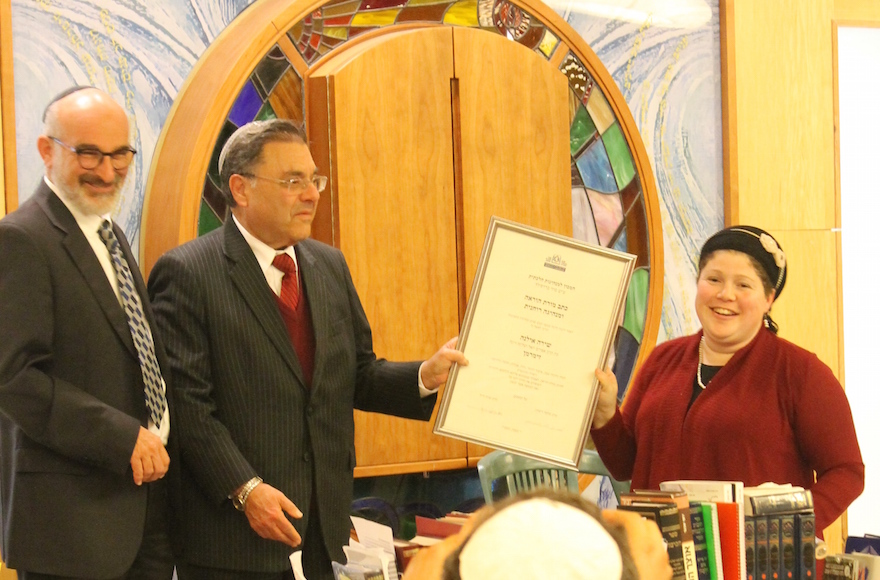 JERUSALEM (JTA) — Rabbi Shlomo Riskin, who left New York’s Upper West Side to establish a thriving Modern Orthodox community in Israel, and Morris Kahn, a South African who co-founded the tech firm Amdocs, were among seven immigrants to Israel from English-speaking countries honored for making major contributions to the Jewish state.

Riskin, 77, chancellor and rosh yeshiva of Ohr Torah Stone and the chief rabbi of Efrat, won in the field of education. Riskin received rabbinic ordination more than 50 years ago, and transformed Manhattan’s Lincoln Square Synagogue into a popular and growing hub of Modern Orthodoxy. In 1983, he moved to Israel with congregants and co-founded Efrat, a West Bank settlement and suburb of Jerusalem with a mixed religious-secular population that today has 8,000 residents.

He will retire in July as chancellor of Ohr Torah Stone, a network of educational institutions that has pushed the limits of traditional Jewish law to be more inclusive of women and Jews by choice.

The Bonei Zion Lifetime Achievement Award was awarded to Kahn, 88, who made aliyah from South Africa in 1956 at the age of 26. He co-founded Amdocs, a  management-and-billing software firm for large telecom outfits, and in recent years has increasingly focused his attention on philanthropy and venture philanthropy in the scientific and medical fields.

Nefesh B’Nefesh said the award recognized “his exemplary entrepreneurial spirit and business acumen which has fueled the Start-up Nation and secured Israel as a world leader in technology.

A Young Leadership Prize was awarded to Maj. Keren Hajioff, head of public diplomacy, Spokesperson’s Unit in the Israel Defense Forces. Hajioff made aliyah from London in 2009 soon after high school and joined the IDF a month later.

The prize “recognizes outstanding Anglo olim who have helped Israel in a meaningful way by encapsulating the spirit of modern-day Zionism and contributing in significant ways towards the State of Israel,” Nefesh B’Nefesh said in a statement.

The winners, who were chosen from among hundreds of nominees, were reviewed by a selection committee of leaders from all walks of Israeli life.

Sylvan Adams is a Canadian real estate developer who came to Israel on aliyah with the help of Nefesh B’Nefesh.