Bill Clinton: The ‘chaver’ who brought Israelis and Palestinians together — to a point 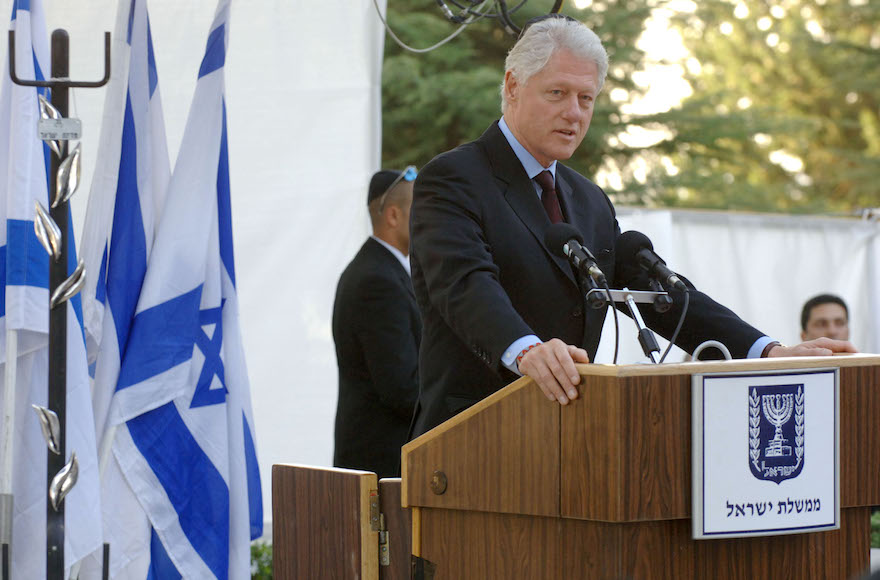 (JTA) — “Shalom, chaver,” Bill Clinton said at the funeral of assassinated Israeli Prime Minister Yitzhak Rabin, and those two words encapsulated the intimate passion Clinton felt toward Israel: He was a friend, one close enough that he wanted to bid goodbye to a man he saw as a mentor in his language.

Clinton’s relationship with the American Jewish community was similarly intimate. Unlike George H.W. Bush, he was an adept retail politician and made it a point to win folks over. The pro-Israel community, likewise, understood that this was a president who responded best to friendly overtures. The American Israel Public Affairs Committee named as its president Steve Grossman, a Massachusetts businessman and early Clinton backer. In 1995, over cigars on the White House balcony, Grossman talked Clinton into imposing the first sanctions on Iran related to its nuclear program.

Clinton in his first term had the luck of working with an Israeli administration whose peacemaking agenda matched his own. In what one reporter called “a triumph of hope over history,” Clinton brought Rabin and Yasser Arafat, the PLO chairman, to the White House to shake hands on their first agreement on ending their conflict.

Yet to the consternation of the Palestinians, Clinton would never get ahead of Israel. Although the Oslo track clearly was destined toward statehood for the Palestinians, Clinton did not articulate that outcome until his last weeks in office. In 2000, after the Camp David talks ended without a deal, Clinton broke with protocol and blamed Yasser Arafat, the PLO leader, for the failure.

After Rabin’s assassination in 1995, Clinton thought it important enough to preserve his friend’s legacy that he blatantly electioneered on behalf of Rabin’s successor, Shimon Peres. Rattled by a series of deadly terrorist bus bombings, Clinton pushed Middle East leaders into convening a summit against terrorism starring Peres. It didn’t work. Benjamin Netanyahu was narrowly elected to his first term in office, and the U.S.-Israel relationship turned rocky.

Clinton grew frustrated at what he said was Netanyahu’s predilection for introducing out-of-left-field demands after talks on an issue had wrapped up for the day. In one instance during the 1998 Wye River negotiations to advance the Oslo process, Netanyahu asked Arafat to assassinate a Gaza Strip police chief. In another, during the same talks, he asked Clinton to release Jonathan Pollard, the civilian Navy analyst who was caught spying for Israel. (Clinton was ready to do it, but his intelligence chiefs were outraged and threatened to quit.)

Clinton learned his lesson by the 1999 elections and kept out — kind of. His two campaign advisers, Stanley Greenberg and James Carville, traveled to Israel to advise Netanyahu’s challenger, Ehud Barak, and Barak won.