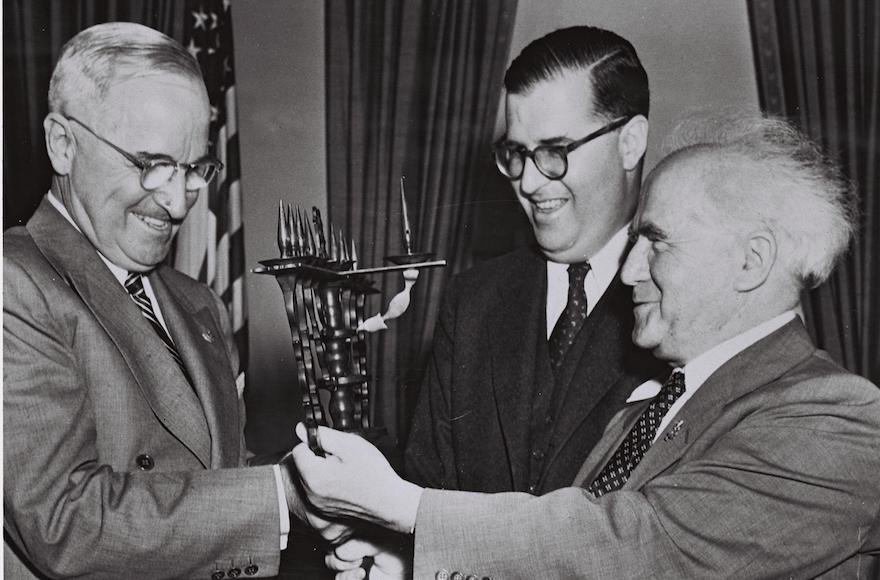 (JTA) — On May 12, 1948, two days before David Ben-Gurion declared Israel’s independence, things were tense at the White House. President Harry Truman was torn between his secretary of state, George Marshall, who counseled against recognizing the new Jewish state, and Clark Clifford, his White House counsel, who said Truman should recognize Israel.

What tipped the balance? Truman’s deeply held Christian faith, coupled with his old Army buddy and former partner in a haberdashery, Eddie Jacobson, who traveled to the White House to make the case for the Jewish state. Truman sent his telegram recognizing Israel 11 minutes after Ben-Gurion proclaimed the country’s existence on May 14, 1948.

Truman also may have recalled a letter he had received a few weeks earlier from Chaim Weizmann, in which the future president of Israel wrote:

“The choice for our people, Mr. President, is between statehood and extermination. History and providence have placed this issue in your hands, and I am confident that you will yet decide it in the spirit of the moral law.”

Truman would not be the last president to harbor a passion for Israel, to sustain a close friendship with a Jew … and to explode into anti-Semitic vituperation. (See under: Richard Nixon.) Truman resented pressures after the war from Jewish groups to help resettle millions of Jewish refugees.

“If Jesus Christ couldn’t satisfy the Jews while on earth, how the hell am I supposed to?” he told his Cabinet in 1946.

His tendency to explode under pressure manifested itself in his relationship with the Jewish state he helped midwife. In 1949, he threatened to break with Israel unless it allowed the return of some Palestinian refugees displaced in Israel’s 1948 War of Independence (Israel agreed, but Arab states rejected the offer). And he pressured Israel, without success, to withdraw from lands captured during that war.