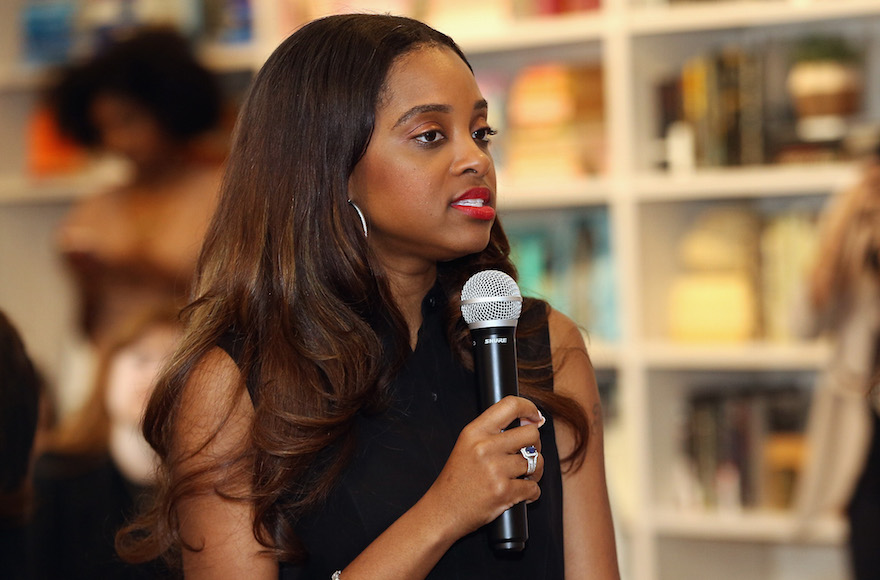 (JTA) — Women’s March leader Tamika Mallory said in a tweet that President Donald Trump’s so-called Muslim ban and plan for a wall on the border with Mexico were inspired directly by the policies of Israeli Prime Minister Benjamin Netanyahu.

Mallory, who returned over the weekend from a trip to Israel sponsored by the New York-based Center for Constitutional Rights, said in the  tweet Sunday, “Be clear: Donald Trump’s wall + #muslimban + #deportation plan are all lines out of the #Netanyahu book of oppression. Trump has referenced this himself. We ought pay attention & not allow folks to label us + try to black list us in to silence. #JusticeDelegation (more 2 come)”

Be clear: Donald Trump’s wall + #muslimban + #deportation plan are all lines out of the #Netanyahu book of oppression. Trump has referenced this himself. We ought pay attention & not allow folks to label us + try to black list us in to silence. #JusticeDelegation (more 2 come)

An hour later she tweeted: “While I was traveling ppl insisted that I must hear ‘both sides.’ As long as the side of injustice exists, we must address it. I heard from some who support the Israeli gvt, but could not explain what I saw with my own eyes. Injustice is a threat to ALL SIDES.#JusticeDelegation”

Mallory was criticized in February by the Anti-Defamation League and others for tweeting enthusiastically about her appearance at a rally by Nation of Islam leader Louis Farrakhan, who delivered a speech laced with anti-Semitic and homophobic remarks. More recently she criticized Starbucks for including the ADL in its anti-bias training, saying the Jewish group “constantly” attacks black and brown people.

In linking Trump and Netanyahu,  Mallory cited a Jerusalem Post article from August 2017 that reported on the transcript of a January 2017 phone call between Trump and President Enrique Peña Nieto of Mexico in which the U.S. president references Israel’s security wall with the West Bank.

“You know, you look at Israel – Israel has a wall and everyone said do not build a wall, walls do not work — 99.9 percent of people trying to come across that wall cannot get across and more,” Trump told Peña Nieto, according to the report. “Bibi Netanyahu told me the wall works.”

Mallory also tweeted on Sunday: “Unpacking my mind … my trip to the Israel & Palestine was schizophrenic. The land is beautiful … the people are full of love & resilience. However, there is a crime against humanity happening and we can not turn a blind eye or be afraid to tell the truth. #JusticeDelegation +”

The Center for Constitutional Rights said on its website that the trip “brought together mostly Black and Brown civil and human rights leaders working on domestic U.S. justice issues who have not had an opportunity to visit Palestine and Israel. The justice delegation was planned to provide an opportunity to better understand the human rights situation in Israel and Palestine, including the history of systematic displacement and institutional racism, as well as the work of human rights defenders there.”

The delegation met with Palestinians and pro-Palestinian activists and visited sites of religious interest.

When the delegation arrived on April 29,  Vincent Warren, executive director of the Center for Constitutional Rights, and Katherine Franke, chair of CCR’s board and Sulzbacher professor of law, gender, and sexuality studies at Columbia University, were detained for 14 hours and interrogated at Ben Gurion International Airport, then denied entry into Israel and deported because of their involvement in organizations that support boycotts against Israel.

Franke was barred from entering because of her “prominent role” with Jewish Voice for Peace, a spokesman for Israel’s Strategic Affairs Ministry told Haaretz. Franke denied a leadership role in JVP, though she said she has volunteered for its academic advisory council in the past.