At US embassy dedication, a day for marking history and praising Trump 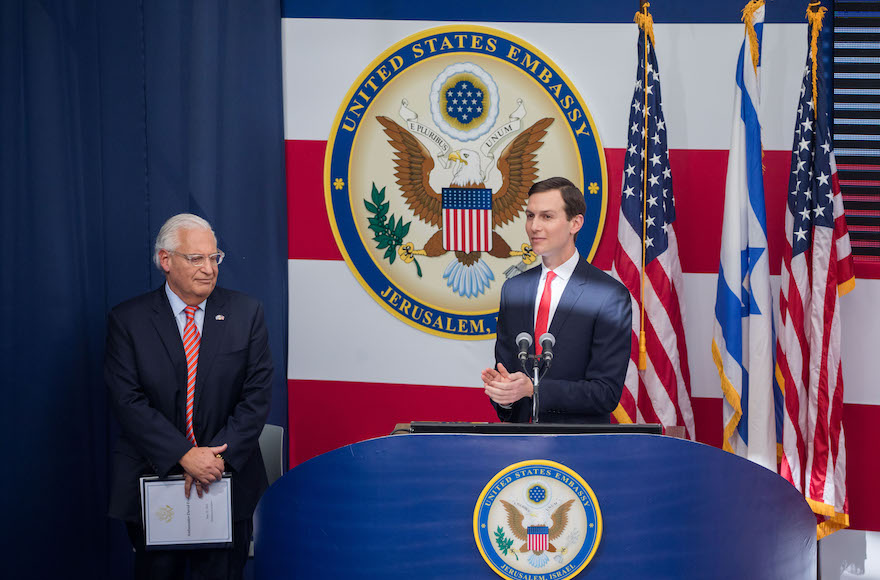 Jared Kushner speaking while U.S. Ambassador to Israel David Friedman looks on at the opening ceremony of the U.S. embassy in Jerusalem, May 14, 2018. (Yonatan Sindel/Flash90)
Advertisement

JERUSALEM (JTA) — Israeli leaders and citizens responded with euphoria as the Trump administration moved the U.S. Embassy to Jerusalem on Monday, designating a pre-existing consular building as the official U.S. diplomatic mission to the Jewish State.

The crowd, which included both Chief Rabbis, the IDF Chief of Staff, the mayor of Jerusalem and the head of the Jewish Agency, stood and applauded for at least half a minute after U.S. Ambassador to Israel David Friedman welcomed them, in a booming voice, “to the dedication and opening of the United States Embassy in Jerusalem, Israel.”

Inevitably, perhaps, the images of pageantry vied with darker news out of Gaza, where at least 50 Palestinians died during violent clashes with the Israeli military along the border.

The West Bank and East Jerusalem were mostly quiet on Monday; outside the new embassy, dozens of demonstrators, including several Arab members of Knesset, held up signs calling Jerusalem the capital of Palestine. Fourteen protesters were arrested following skirmishes with police.

At the ceremony itself, meanwhile, local politicians vied with each other to see who could offer the most expansive plaudits as their constituents posted memes on social media describing the president in almost messianic terms.

Addressing the dedication ceremony via video, President Donald Trump asserted that “for many years we failed to acknowledge the obvious, the plain reality that Israel’s capital is Jerusalem.” He bragged that “on my direction, the United States finally and officially recognized Jerusalem as the true capital of Israel.”

Likely responding to Palestinian assertions that such recognition hampers efforts at a negotiated settlement to the conflict, Trump asserted that the United States was “committed to facilitating a lasting peace agreement” and to the maintenance of the status quo on the Temple Mount.

Israeli Prime Minister Benjamin Netanyahu thanked his American counterpart effusively, saying that Israel had “no better friends in the world” and that “by recognizing history” Trump had “made history.”

“Thank you, President Trump for having the courage to keep your promises,” he continued. “Thank you for making the alliance between Israel and America stronger than ever.”

Despite the violence accompanying the embassy move, Trump adviser and son-in-law Jared Kushner told attendees at the ceremony that “previously unimaginable alliances are emerging” and that the U.S. would support a peace agreement in which “both sides can get more than they give.” Last week, Saudi Arabia, the United Arab Emirates and Bahrain welcomed Trump’s decision to pull the U.S. out of the Iran nuclear deal and reimpose sanctions on Tehran.

Kushner also laid the blame for the fighting in Gaza squarely on the Palestinians, stating that “those provoking violence are part of the problem and not part of the solution.”

“The truth and peace are interconnected. A peace built on lies will crash on the rocks of Middle Eastern realities and the truth is that Jerusalem will always be the capital of the Jewish state,” he said. “May the truth advance a lasting peace between us and our neighbors.” 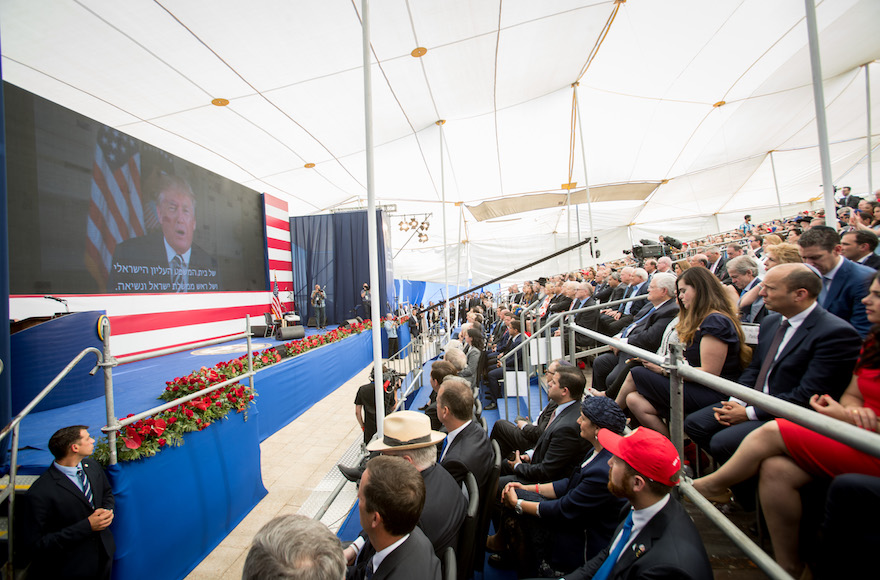 People watching President Donald Trump speak on a video shown at the opening ceremony of the U.S. embassy in Jerusalem, May 14, 2018. (Yonatan Sindel/Flash90)

Both administration figures and Israeli politicians heaped praise on the president in response to the embassy move. At a reception organized by the Orthodox Union at Jerusalem’s Waldorf Astoria hotel on Monday morning, former Sen. Joseph Lieberman, I-Conn., one of the architects of the 1995 Jerusalem Embassy Act, told JTA that it had been “very frustrating and disappointing every time a president of the United States suspended the implementation of that act” and that he was “thrilled” by Trump’s decision. The Jerusalem Embassy Act recognized Jerusalem as the capital of Israel and called for the relocation of the embassy from Tel Aviv to Jerusalem, but Trump’s predecessors declined to implement it, citing foreign policy concerns.

Asked if he believed that Trump’s involvement would turn Israel into a partisan issue, Lieberman replied that his bill had been bi-partisan and “support for Jerusalem as the capital of Israel is broadly supported by members of both parties.”

Others present were unrestrained in their praise. U.S. Ambassador to Israel David Friedman extolled the president’s “courage, vision, strength and moral clarity.” The O.U.’s Mark Bane called Trump “God’s messenger on this important day.” Citing his decision to pull out of the Iran nuclear deal, Justice Minister Ayelet Shaked called Trump the “the [Winston] Churchill of the 21st century.”

This rhetoric was off-putting to some attendees, who decried what they saw as excessive. While there was no question that the embassy move was significant, “the focus needs to be on the essence and not about Trump,” opposition MK Pnina Tamano-Shata of Yesh Atid told JTA.

“To compare him to Churchill or to Balfour is a little exaggerated. The state of Israel and the people of Israel know that our capital is Jerusalem and the transfer of the Embassy is [correct] but let’s take things in proportion. I am for our nation celebrating but we also need to be careful that we don’t excessively praise in an exaggerated sense of euphoria … and not to raise up a man in an exaggerated way,” she said.

Asked about how Israeli leaders were addressing Trump, Dan Shapiro, who served as U.S. ambassador to Israel under President Barack Obama, told JTA that it was understandable that they were engaging in “hyperbole” because “it’s become accepted in international circles that the way to gain favor with President Trump is to engage in excessive flattery.”

Shapiro said he supported the embassy move but harbored reservations about how it was implemented. He explained that Israel was doing “everything possible to have the best possible relation with the president of the United States” and that this was “completely legitimate.”

However, he cautioned, “it would be advisable to bear in mind the significant number of Americans deeply who are alienated from this president on other issues” and to work on “maintaining the historic bi-partisan nature of this relationship.”

MK Ayman Odeh, an Arab Israeli who heads the Knesset’s Joint List, linked the killing of Gaza protesters — who are engaged in a six-week series of demonstrations to coincide with Israel’s 70th anniversary celebrations — to the embassy dedication.

“The opening of the American embassy in Jerusalem and its grand ceremony is part of the same policy that has claimed the lives of dozens of Gazans,” Odeh said in a statement. “Today, there is nothing to celebrate. The opening of the  embassy is yet another provocative step that signals the destruction of the notion of peace. The Netanyahu-Trump alliance continues to deepen the conflict.”

Meanwhile, in East Jerusalem, the mood was subdued. Near the Damascus Gate, tourists and Arab shoppers mingled, watched by dozens of police officers clad in body armor and carrying automatic weapons. Local residents, while unhappy with the American decision, seemed apathetic in the face of a reality they couldn’t change.

Inside the Old City’s Arab market, a man who identified himself only as Yassir sat in his dress shop, watching news footage from Gaza. “Trump is playing with fire,” he said. “There could be war all over. The people of Gaza don’t care if they die.” Asked why there wasn’t any significant unrest in East Jerusalem, Yassir replied resignedly that it was “very difficult living directly with the Israelis” and that any young man who went out in the street would end up with a police record that would follow him for life.

“It’s different in Gaza, the authorities support the protests,” he said.

In a nearby restaurant, a man named Tawfik expressed similarly fatalistic attitude, asserting that the Israelis had Egypt, Saudi Arabia and the Gulf states in their pockets. Trump, he said, was “more Jewish than the Jews.” The Palestinians “have to be smart,” he continued, claiming that if Jerusalem residents took to the streets “the Jews will kill us and say we are against peace.”