On Shavuot, remember that Ruth was a poor immigrant 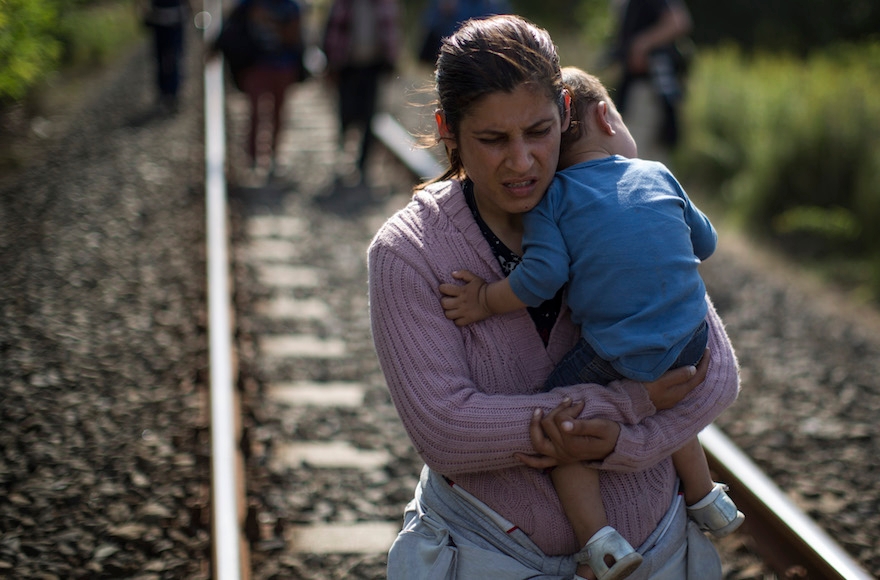 An immigrant woman walking with her child towards the Hungarian town of Szeged in 2015. (Dan Kitwood/Getty Images)
Advertisement

EUGENE, Oregon (JTA) — A destitute widowed immigrant does what it takes to scrape by so she and her aging mother-in-law can survive. She deals with invisibility; she deals with unwanted attention; she performs manual labor; and she eventually marries up, has a child and escapes the grind. Presumably, this is the happy ending she was hoping for.

Where have we heard this story before?

Every year for millennia, Jews read the Book of Ruth during Shavuot — beginning this year at sundown on May 19. It is often read as a story of unwavering loyalty, of the rewards for kindness, or as a model for conversion. It is a microcosm of all of Torah of which the rabbinic sage Ben Bag-Bag wrote, “Turn it and turn it, for everything is in it.”

Ruth is also, vitally, the story of a poor immigrant woman. Every time we fail to notice that, Ruth suffers invisibility twice — first in the text, and then in our reading of the story and our ignoring its narratives of immigration, poverty and struggle.

This year, Shavuot coincides with the opening of the Poor People’s Campaign (PPC), organized 50 years after Rev. Dr. Martin Luther King Jr. called for the original Poor People’s Campaign prior to his assassination. According to its website, the PPC “is uniting tens of thousands of people across the country to challenge the evils of systemic racism, poverty, the war economy, ecological devastation and the nation’s distorted morality.” Between Mothers’ Day and the end of June, tens of thousands of people — including members of T’ruah: The Rabbinic Call for Human Rights — will rally and commit acts of civil disobedience at our national and state capitals in order to show “the human and economic costs of inequality” and demand work towards a society in which “justice and equality are a reality for all.”

The first week of the Poor People’s Campaign, from May 14 to 19, focuses on how poverty particularly affects women, children and people with disabilities. The second week focuses on the intersection of poverty, xenophobia and racism. And Shavuot comes at the cusp of those two weeks, with its reading about Ruth, a poor immigrant woman struggling in an unfamiliar culture.

The responsibility to care for the poor, immigrants, women and other vulnerable populations is explicit throughout Torah. In Chapter 2 of the Book of Ruth, she goes to glean in Boaz’s field — a reference to the frequent Torah commandment to let the poor and other vulnerable populations pick over the sheaves left unharvested. Deuteronomy 24:19, for example, instructs: “When you reap the harvest in your field and overlook a sheaf in the field, do not turn back to get it; it shall go to the foreign-born, the fatherless, and the widow — in order that Hashem your God may bless you in all your undertakings.”

Those three categories — the foreign-born, orphaned and widow, are often mentioned for special protection throughout the Torah. As Chizkuni, the 13th-century French commentator, explained, those three categories of people “do not have influence or protectors who protest when they are mistreated to the authorities.”

Thus Torah steps in to correct where society is inclined to fail.

And even Torah doesn’t legislate all of the protection these vulnerable populations might need. Boaz went beyond and assured Ruth, “I have ordered my men not to touch you,” leaving us to wonder, if we pay attention, what his men might have attempted to do without Boaz’s protection. It was terrifying to be a poor immigrant woman then in many of the same ways it is now.

Torah demands that society care for the most vulnerable, and it is evident that the United States in 2018 needs that corrective as badly as the land of Israel did in the time of Ruth. As the Poor People’s Campaign notes, citing the Supplemental Poverty Measure, a whopping 43.5 percent of the U.S. population — or 140 million people — are poor or low-income. That includes 38.2 million children, or 51.9 percent — more than half! — of America’s children under 18. How do we deal with that? How do we raise the voices of those who like Ruth might otherwise be invisible? What are we willing to do to ensure that the vulnerable aren’t mistreated? But beyond that – what changes are we willing to demand so that so many people don’t have feel vulnerable in the first place?

One way is to join an action with the Poor People’s Campaign. And let’s bring visibility to those who have traditionally been rendered invisible – starting with our own tradition, and the story of Ruth. Let us honor the entirety of Ruth this Shavuot. When we read the Book of Ruth, let’s acknowledge not only her loyalty and kindness, but her courage and struggle, as a poor woman and an immigrant.

(Rabbi Ruhi Sophia Motzkin Rubenstein serves as the rabbi of Temple Beth Israel in Eugene, Oregon, and is a member of T’ruah: The Rabbinic Call for Human Rights. T’ruah has created numerous Jewish resources [including a text-study on the Book of Ruth] for the Poor People’s Campaign.)