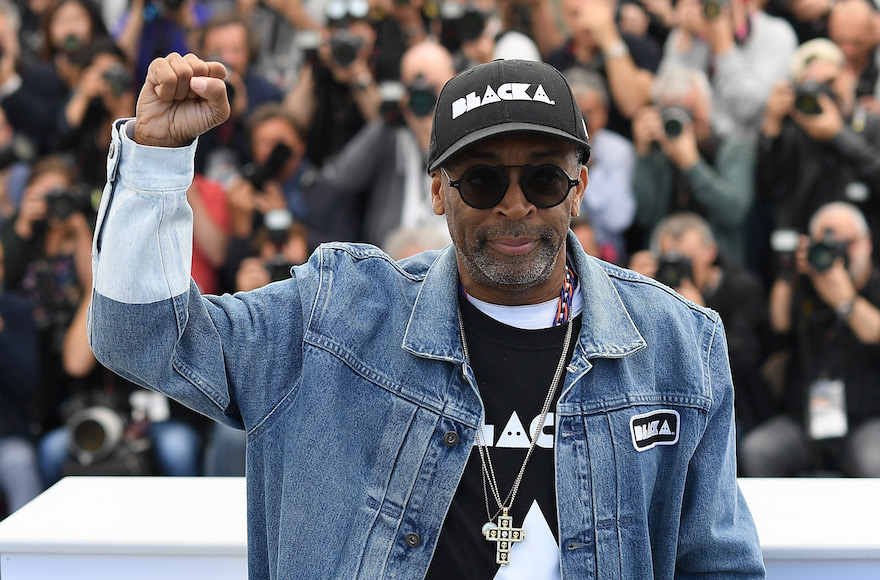 (JTA) — Spike Lee is releasing a new “joint” in August. “BlacKkKlansman” is a buddy cop film purportedly based on real events, in which a black officer (John David Washington, of the HBO show “Ballers”) and a Jewish officer (Adam Driver, of “Girls,” “Star Wars” sequels and more) team up to infiltrate a Colorado Springs branch of the Ku Klux Klan, led by David Duke (Topher Grace, of “That ’70s Show”).

From the trailer, Washington and Driver appear to cultivate the easy-going bromance common to such films.

Lee’s depiction of the black-Jewish relationship has come a long way since the release of “Mo’ Better Blues” (1990), his second major film after his breakout, “Do the Right Thing” (1989). The film’s depiction of two conniving Jewish impresario brothers was widely condemned at the time as anti-Semitic.

In ensuing interviews, Lee doubled down and insisted he was not anti-Semitic, but often by advancing anti-Semitic arguments: Jews controlled Hollywood, and they wouldn’t let him be anti-Semitic, right? What’s more, there was no stereotype: Like the Jewish characters in the film Jews do exploit blacks!

Jewish quotient: The Flatbushes speak with broad New York Jewish accents as they ruthlessly exploit the jazz musicians who are the film’s protagonists.

“The Flatbush brothers are the film’s villains, their greed inseparable from their Jewish identity,” The New York Times wrote at the time. “And because there are no other Jews to offset them, they become tokens of an entire ethnic group.”

Key dialogue: Josh (Nicholas Turturro) says “I only trust my mother … sometimes,” and the brothers accuse an impoverished client of “trying to take food out of our kids’ mouths.”

Jewish quotient: The book is based on a novel by the Bronx-raised Jewish novelist Richard Price. Rocco and his partner cop investigate a murder case in Brooklyn’s drug underworld. When someone confesses to the crime, Rocco doesn’t believe it and keeps digging, even though his fellow cops don’t care about the African-American victim and the alleged African-American perpetrator. His obsession leads to this choice exchange with a drug dealer, played by Delroy Lindo:

Key dialogue: Rodney: Rocco Klein … Rocco Klein, you know, I’ve always wanted to ask you: you Italian, you a Jew? I mean, what are you? You can’t make up your mind?
Rocco: Me?
Rodney: Yeah, you.
Rocco: I’m from the lost black tribe of Israel, the Yo’s.

Jewish character: Rick, played by Richard Belzer, who is Jewish.

Jewish quotient: Rick, a bus driver, is asked by an African-American colleague, George, to be his co-driver for a trip from Los Angeles to Washington D.C. for the Million Man March. At first, Rick treats the gig as he would any job, but he finds himself quarreling more and more with the passengers as he grapples with the tensions between the civil rights ideals of the marchers and the fact that the march is organized by a notorious anti-Semite: Nation of Islam leader Louis Farrakhan. Rick eventually tells George he can’t continue.

Key dialogue: George: Well okay, let’s just get it out in the open. I’ll bet you’d like to call me a nigger or, what do you call it, a schvartze, or whatever the fuck it is. Well, I’m going to allow you to say it, go ahead.
Rick: I never called anybody that in my life. All I’m saying is that if this bus is going to the Farrakhan march, I can’t be a part of that.
George: This is not just Farrakhan’s march.
Rick: I don’t want to debate this thing. He called Judaism a gutter religion; he said Hitler was a great man. I wouldn’t expect you to drive a bus to a Ku Klux Klan rally, so don’t expect me to do this.
George: So now you’re comparing this to a Klan rally.

Jewish character: Jacob Elinsky, played by the late Philip Seymour Hoffman, who was not Jewish.

Jewish quotient: Monty Brogan, played by Edward Norton, is a drug dealer sentenced to seven years in prison who is spending his last 24 hours of freedom with his closest longtime friends — Elinsky, a teacher, and Frank Slaughtery, a stockbroker played by Barry Pepper. Each man grapples with how their promising lives have veered off course. Elinksy is an English teacher who gave up the trappings of a Manhattan upbringing with hopes of changing the lives of his students. He’s also now on the verge of an affair with one of them, who is 17 years old.

Key dialogue: Jacob chastises Frank for “defraud[ing] foreign governments” at work while ignoring the reality around him.

Frank: Jacob, you’re a rich Jewish kid from the Upper East Side who’s ashamed of his wealth. You walk around unhappy 24/7, trying to make up for the fact that you were born privileged. Fuck that! You know what? That’s just some knee-jerk liberalism bullshit, man. You call that reality?

Jewish character: Flip Zimmerman, played by Adam Driver — who, like Turturro, is not Jewish but often plays Jews.

Jewish quotient: From the trailer, we can see John David Washington is Ron Stallworth, the first black to join the Colorado Springs police force. He initiates an investigation into the local branch of the Ku Klux Klan by calling them up and asking to join their ranks. But he needs a white man to act as him in their presence, and he enlists Driver’s character Zimmerman.

Key dialogue (from the trailer): Zimmerman: For you it’s a crusade, for me it’s a job.
Stallworth: You’re Jewish. That hatred, doesn’t that piss you off? Why you acting like you ain’t got skin in the game?