‘The Israel Bible’ highlights Jewish links to Land of Israel 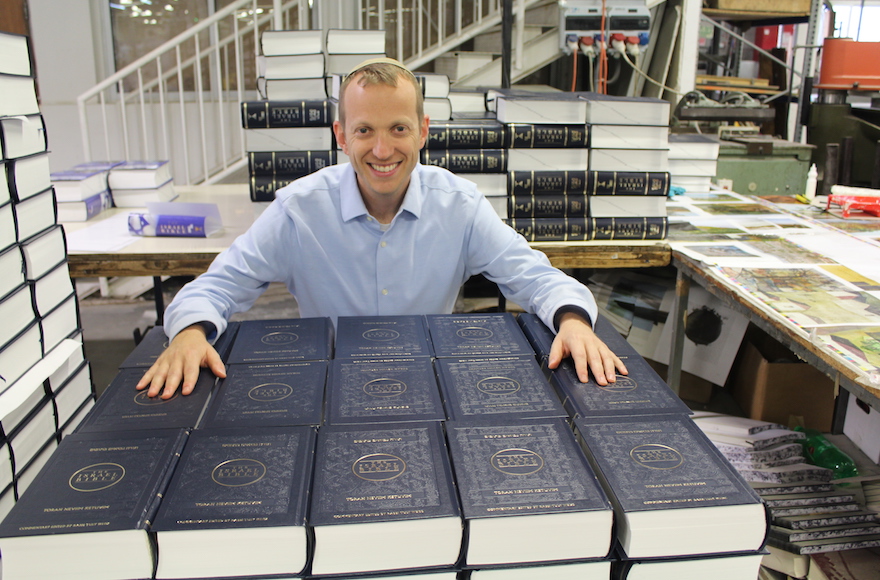 This story is sponsored by the American Jewish Press Association.

JERUSALEM — In 1903, American evangelist and Christian Zionist William E. Blackstone sent Theodor Herzl a personal Bible. It was a gift with a specific message.

Blackstone had heard that at the Sixth Zionist Congress Herzl had proposed a territory in East Africa as a haven for Eastern European Jews. Opposed to the Uganda Scheme and convinced that a Jewish homeland should be created only in the Holy Land, Blackstone highlighted for Herzl the biblical passages referring to the restoration of the Jews to the Land of Israel.

One hundred and fifteen years later, “The Israel Bible,” a newly published Hebrew Bible (Tanakh in Hebrew) does for today’s readers what Blackstone did for Herzl — and more. Centered around the Land of Israel, the people of Israel and the dynamic relationship between them, this new Tanakh provides explanations and commentaries that amplify Blackstone’s message and bring it up to date 70 years after Israel’s founding and a half-century after Israel’s victory in the 1967 Six-Day War, resulting in Israel’s capture of the biblical heartland and unification of Jerusalem.

“The Israel Bible” speaks to all who believe in biblical prophecy and that the Jews have a God-given right to the entire Land of Israel. Religious Zionist Jews are an obvious target audience, but so are the world’s 700 million evangelical Christians.

“The Israel Bible” editor Rabbi Tuly Weisz predicts it will be a game changer.

“The Bible that has been a source of division between Jews and Christians can now be what brings unity,” he said.

Weisz is founder and publisher of Israel365, an Israel-based, Jewish-owned and run media company targeting evangelical Christians interested in connecting with the Holy Land from biblical and prophetic points of view.

“The Israel Bible,” published by Menorah Books, a division of Koren Publishers Jerusalem, uses the Masoretic Hebrew text and a modified version of the 1984 New Jewish Publication Society English translation. Key names and places appear in transliteration, as do all highlighted verses denoting God and the people of Israel’s connection to the Land of Israel or Jerusalem.

A representative commentary comparing Israeli settlers in Hebron to the biblical Caleb emphasizes loyalty to God and willingness to fight for the land. It mentions the anti-Jewish violence and terror that have plagued the city for decades and how these settlers “bravely preserve both their own community and the rights of the entire Jewish people to pray in the holy Cave of the Machpelah (Cave of the Patriarchs)” in Hebron. The book does not mention the violence or vitriol directed at Hebron’s Arab population by Jewish residents of the city, who are among the most extreme Jewish settlers in the West Bank.

The book includes maps showing the entire biblical Land of Israel as belonging to the modern state of Israel. Though many contemporary maps used in Israel show the same, Israel’s own government has never formally recognized the West Bank as part of Israel.

Inspired by the account of Blackstone and Herzl, Weisz began a project that would eventually lead to the publication of “The Israel Bible.” He carefully read through all 24 books of the Tanakh, making note of every single mention of the Land of Israel. He ended up highlighting at least one verse on almost every page, and found hundreds of mentions of Jerusalem alone.

This was enough to convince Weisz to immigrate to Israel with his family from Columbus, Ohio in 2011, and to found Israel365 as a way to engage non-Jews in their biblically prescribed role in the ingathering of the exiles and the rebirth of Israel.

Weisz began by sending out daily emails with one of these biblical verses, along with a short commentary. Within a short time, his distribution list had grown into the tens of thousands. He knew he was on to something.

Weisz recruited a team of local Torah scholars to help produce additional content, and in 2014, Israel365 self-published a booklet with the verses, commentaries and supplemental resources for the Book of Genesis. By December 2015, booklets for all 24 books of the Tanakh were complete. At that point, Weisz approached Koren, a respected Judaica publisher, about putting all of them together into a professionally edited and produced Hebrew Bible.

“I wasn’t necessarily looking to write a book for Christians. Our staff is Jewish and we wanted it to be authentic,” he said. “But it was important for it to speak in a universal way so that non-Jews could understand the references and nuances.”

Rev. David Swaggerty, senior pastor at CharismaLife Ministries in Whitehall, Ohio, recently toured Israel with a copy of  “The Israel Bible” in hand.

“This is a necessity for the library of any student of the word of God,” Swaggerty said.

“I have seven or eight Bible commentaries on my shelf, and they only give a limited knowledge of the original Hebrew context. That makes them merely opinion,” he added. “This Bible gives a first-hand understanding, clarity and invaluable insights. It helps us better understand what God is conveying to us.”

Swaggerty emphasized that most evangelicals already believe wholeheartedly that “God gave the Land of Israel to Abraham and his seed.”

“However, this Bible solidifies this for those who question. And the contemporary commentaries, like those of Netanyahu and [Jewish Agency Chairman Natan] Sharansky bring it up to date, showing that the prophecy is unfolding today and nothing can stop it,” the pastor said.

Rabbi Shomo Riskin, chief rabbi of Efrat and founder of the Center for Jewish-Christian Understanding & Cooperation, contributed a foreword to “The Israel Bible.” He views it as a tool to ensure biblical literacy among Jews.

“If we are to truly enjoy the Land of Israel, it is incumbent upon us to continually study the Torah,” Riskin wrote. “’The Israel Bible’ provides us the lyrical content to express our joy in living in the Land that God calls holy.”