A CNN panel talked about the Israeli rabbi who compared black children to monkeys. It got weird. 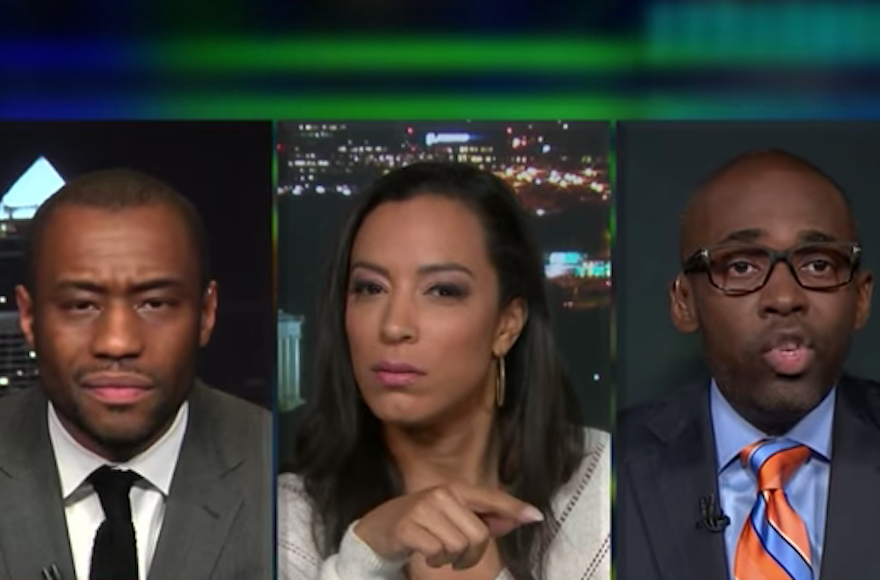 (JTA) — On CNN on Tuesday, Don Lemon asked an all-black panel to comment on how they felt about Ivanka Trump and Jared Kushner receiving a blessing from Sephardic Chief Rabbi Yitzhak Yosef, during their visit to Israel to dedicate the new U.S. Embassy in Jerusalem.

Yosef is under criminal investigation for making a bizarre analogy that compared a hypothetical black child born to white parents with a monkey born to human parents. He also repeatedly referred to blacks as “Kushim,” a pejorative term.

The CNN segment, however, devolved from monkeys into a weird discussion about manhood.

Lemon showed the panel a photo posted on Twitter on Sunday, a day ahead of the embassy festivities, by Jewish Insider reporter Jacob Kornbluh.

“What’s your reaction to them meeting and getting a blessing from this rabbi who once compared black people to monkeys?” Lemon asked.

Up first was Paris Dennard, an African-American conservative commentator and Trump Advisory Board member.

“If that is true, he should certainly apologize for it if he means it,” Dennard said of Yosef. “And I think that if it just shows that, if the Kushners knew about that ahead of time, it just shows grace and love and acceptance and I think that’s an amazing thing.”

Then Rye leans in.

“Paris, somebody calls you a monkey you looking to show grace and love, you can’t do that with correction? You can’t tell them who you really are, you’re a man! You can’t allow someone to call you an animal,” she said.

Dennard, weirdly, took Rye’s comments on racism as an attack on his masculinity.

“Thank you Angela, I don’t need you to tell me or inform me of that, I’m acutely aware of my manhood,” he said.

“That wasn’t shade, it was just saying you show grace and love by correcting, Brother Man!” she said.

Rye also was familiar with the case, and Rabbi Yosef’s multiple sins against thinking before speaking.

“He also called Ethiopian Jews ‘kushi,’ which is also a derogatory term, he also compared women who dress immodestly to animals,” she said.

Rye then circled back to Lemon’s question about the appropriateness of Trump’s Jewish daughter and son-in-law of taking Yosef’s blessing.

“Paris, you don’t show grace and love to someone by allowing them to lay hands on you or to bless you,” she said. “You show yourself worthy of respect, of not being ignorant and shunning bigotry by making sure those people don’t have a place in your life!”

When Yosef’s “monkey” comment came to light, his office said he was drawing on an analogy from the Talmud to explain when one should say a blessing over a highly unusual event. One such event, he suggests according to the Talmud’s 1,800-year-old idiom, would be if a white couple gave birth to a black child, or a black couple gave birth to a monkey.