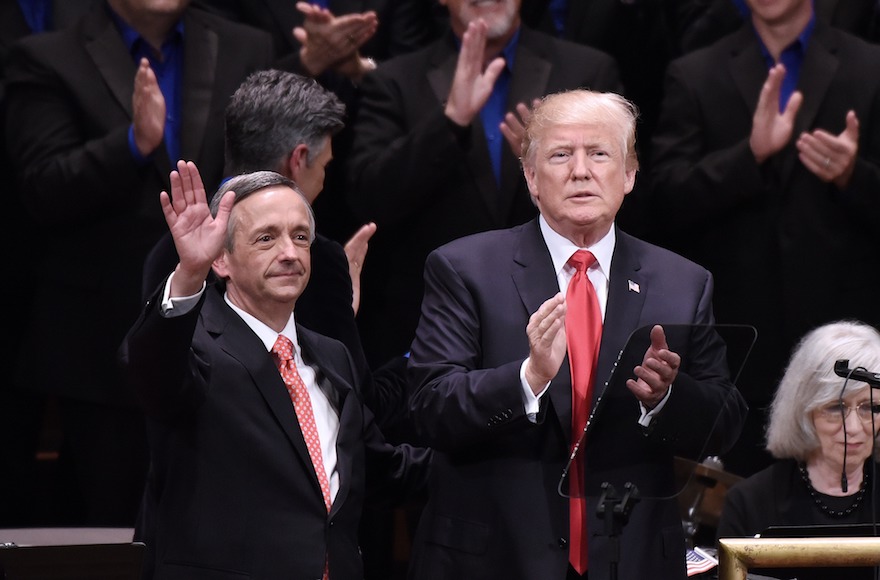 (JTA) — A Dallas pastor who has disparaged Jews, Mormons and Muslims was invited to deliver a prayer at the Jerusalem embassy dedication by U.S. Ambassador to Israel David Friedman, the State Department said.

Robert Jeffress, the pastor of a Southern Baptist megachurch, is a Fox News contributor, a prominent supporter of President Donald Trump and host of radio and television shows broadcast throughout the United States.

He has said “you can’t be saved by being a Jew” and “Mormonism is a heresy from the pit of hell.”

Prior to the embassy dedication ceremony on May 12, former Republican presidential nominee Mitt Romney lambasted Jeffress as a religious bigot.

On Tuesday, State Department spokeswoman Heather Nauert said in response to a reporter’s question that it was Friedman’s decision to bring Jeffress on board for the ceremony.

“We would certainly not agree with the pastor’s remarks, some of his controversial remarks that he has made about various religious groups, but he was chosen by Ambassador Friedman, who was certainly welcome to do so, and made that decision,” Nauert said.

“(E)mbassies certainly have their free will sometimes to make decisions about who they want to bring in as guest lecturers or people to lead a ceremony or some sort of a celebration. To my knowledge, we did not have any role in making that decision,” she also said.

Friedman, who is Jewish, defended the participation of Jeffress and Pastor John Hagee, head of Christians United for Israel, in an interview with Breitbart News a day after the ceremony.

“I chose those pastors because they deserve to speak,” he said, “because they represented a community very much in support of what happened yesterday.”

Added Friedman: “The evangelical community in particular shares the same belief that Jewish people have, that Israel is a special place, that its existence is evidence of a covenant between God and the Jewish people, and that the relationship between the United States and Israel is a blessed one, and that America itself will receive blessings — if not Godly blessings, then certainly the benefits that come to people who act righteously and courageously.”