This lawyer yelled at restaurant employees for speaking Spanish. Now he’s in trouble. 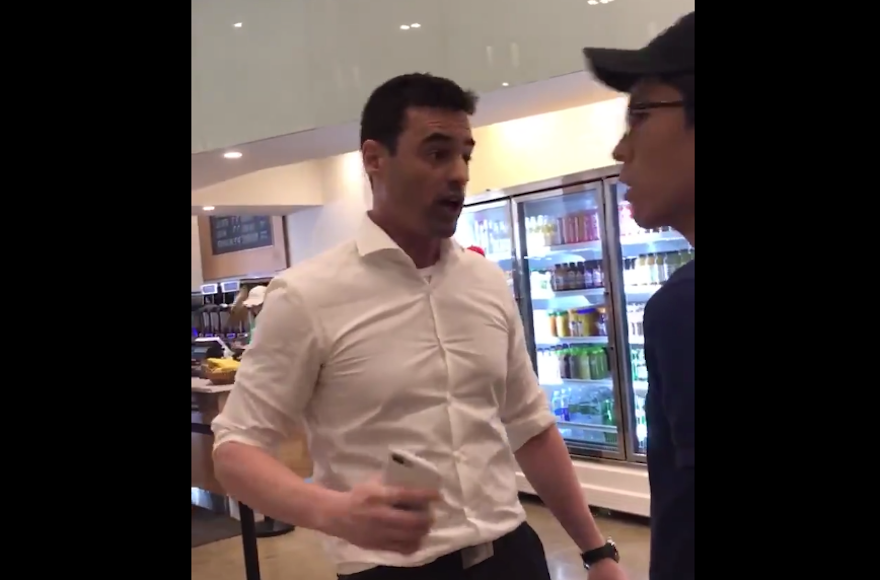 NEW YORK (JTA) — It’s hard to say what inspired Aaron Schlossberg to go off on a bigoted tirade against employees at a local cafeteria.

But one day later, he has officially transformed from being a random lawyer in midtown Manhattan to being the new face of internet shame. His office is being bombarded by bad reviews. Videos are surfacing of his previous outbursts. He made the front page of the New York Daily News. A congressman wants to get him investigated.

Schlossberg’s moment of infamy began on Wednesday, when he was filmed complaining in a Manhattan Fresh Kitchen about employees who were speaking Spanish to one another and a customer. Then he accused them of being illegal immigrants (without, it seems, any actual evidence) and threatened to call Immigration and Customs Enforcement (or ICE) to have them arrested.

Who this this bigot in Midtown Manhattan? What's his name?

Here he is harassing & insulting two women for speaking Spanish…TO EACH OTHER in the middle of Manhattan.

“Your staff is speaking Spanish to customers when they should be speaking English,” Schlossberg said. “It’s America … And my guess is, they’re not documented. So my next call is to ICE to have each one of those kicked out of my country.”

Things spiraled from there. Someone posted a video of the encounter. Shaun King, an anti-racism activist and columnist with a large social media following, uncovered Schlossberg’s identity. Then another journalist published video of Schlossberg at a right-wing Jewish protest against Palestinian-American activist Linda Sarsour last year, accusing pro-Palestinian Jews of faking their religion.

By Thursday morning, New Yorkers who hadn’t heard of Schlossberg could see a full-page photo of him on the cover of the New York Daily News, a leading tabloid, with the headline, “Jodete, idiota!” (Spanish for “screw you, idiot.”)

Then another video surfaced, this one from 2016, of Schlossberg calling someone an “ugly f*cking foreigner.” (If it matters, the target is, in fact, a United States citizen.)

This is the unedited video from October of 2016 of Manhattan Attorney Aaron Schlossberg assaulting, then calling a complete stranger "an ugly fucking foreigner" on the sidewalk on 5th Avenue.

The man he's talking to, @morewillie, is a white man from Massachusetts.

Here is what we know about Aaron Schlossberg: He’s a contract lawyer in midtown Manhattan, at a self-named firm he founded in 2012. He graduated from Johns Hopkins University and George Washington University Law School. Ironically enough, his website says he speaks fluent Spanish, along with a few other languages. He donated $500 to Donald Trump’s presidential campaign in 2016. He’s been to Israel twice.

Schlossberg is just the latest person to be lambasted via video for issues involving race. A video of two black men being kicked out of a Starbucks and arrested led the chain to announce a one-day closing of its U.S. stores for sensitivity training. Videos of police being called because people of color were napping in a dorm, barbecuing in a park and staying in an Airbnb have also sparked backlashes.

Beyond the public shaming, Schlossberg appears to have suffered concrete harm from his Fresh Kitchen fracas. Adriano Espaillat, a first-term congressman from Upper Manhattan, is filing a grievance against him with the New York State Bar Association. As of noon on Thursday, 8,000 people have signed a petition to get him disbarred.

In the meantime, reporters (including me) have tried unsuccessfully to get a hold of Schlossberg, including some (not me) who confronted him in front of his apartment. But he seems determined to erase whatever online presence he has. His LinkedIn page is gone. So is his firm’s Facebook page.

But that hasn’t stopped people from filling his firm’s Yelp page with terrible reviews.

Others are having more fun with the controversy. As reported by Gothamist, a GoFundMe page has raised more than $1,000 to send a Mariachi band and a taco truck to Schlossberg’s office. More than 1,000 people say they plan to go to a “Latin Party at Racist Aaron Schlossberg’s Midtown office” on Friday, according to Facebook.

No word on whether Schlossberg will attend.