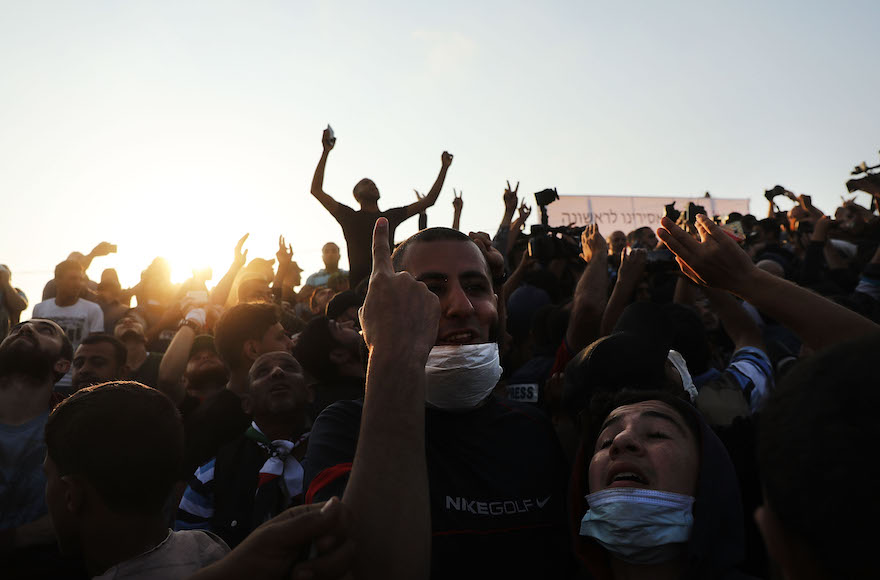 People cheering at the border fence with Israel in Gaza City, May 15, 2018. (Spencer Platt/Getty Images)
Advertisement

(JTA) — A senior member of Hamas said that when his organization “talk[s] about ‘peaceful resistance,’ we are deceiving the public.”

Mahmoud al-Zahar, who according to some is a co-founder of the Islamist group ruling Gaza, spoke May 13 about protests organized by Gaza on its border with Israel. Dozens of Palestinians have been killed in demonstrations their leaders say is nonviolent; Israel points to evidence that demonstrators have been armed with Molotov cocktails and incendiary kites.

“This is not peaceful resistance. Has the option [of armed struggle] diminished? No,” Al-Zahar, former foreign minister in the Hamas government, said during an interview with Al-Jazeera. “On the contrary, it is growing and developing. That’s clear. So when we talk about ‘peaceful resistance,’ we are deceiving the public.”

“I agree. Shooting guns and lobbing explosives at Israelis isn’t peaceful at all,” Netanyahu said in the English-language video message. He also quoted Hamas commander Yahya Sinwar who before Monday’s riots was filmed saying that during the clashes, “we will tear down their border and tear out their hearts.”

This, Netanyahu said, “is what we are defending our families against. And you would do exactly the same.”

Salah Al Bardawil, a Hamas lawmaker and spokesperson in Khan Yunis, on Wednesday said that 50 out of the 62 people listed as killed Monday were members of his organization. Israel has identified only 24 fatalities as belonging to Hamas.

Separately, the United Nations Human Rights Council accused Israel of keeping Gazans “caged in a toxic slum” during a special session in Geneva on the Gaza border clashes.