Your guide to Shavuot, now with 50 percent less facts 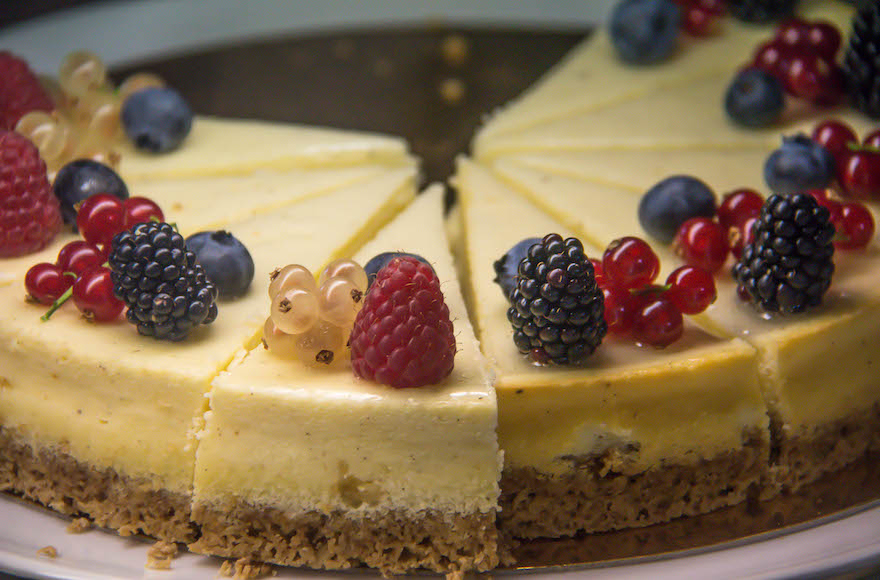 (JTA) — Let’s face it: Shavuot is the National Hockey League of Jewish holidays. In terms of popularity, Passover, the High Holy Days and Hanukkah are the NFL, NBA and Major League Baseball. Shavuot may have an intense following, but it’s much smaller. I don’t know if Shavuot is more popular in Canada. For the sake of the analogy, let’s assume yes.

Rabbis and Jewish educators lament that Shavuot isn’t more widely known or celebrated. It is, after all, a festival linked to the giving of the Torah at Mount Sinai, which not only transformed an oppressed band of refugees from Egypt into a people with a common destiny and divine responsibilities, but provided decades of fodder for New Yorker cartoons.

But the relative obscurity of Shavuot is also an opportunity. Since so few people really understand what it is about, it’s a chance to, well, make up stuff. Since no one is going to check your facts, clever synagogues can transform the holiday into a marketing tool. Jewish organizations can stamp their brand on it. Parents can guilt their children in new and diabolical ways.

Watch how it is done:

Shavuot, literally the feast of “weeks,” is identified with the giving of the Torah on Mount Sinai.

It tends to fall in mid to late spring, and is therefore also known as the “festival of allergies” (Hebrew: “Hag ha-Zyrtec”). People often mark the occasion by gathering in air-conditioned synagogues, which are not only free of allergens but include large numbers of medical specialists. Gluten- and nut-free options are available at Kiddush; please ask your usher.

What are some customs and practices for Shavuot?

The giving of the Torah inspired a tradition of staying up all night studying Jewish texts. These include the Five Books of Moses, the Talmud and, in many synagogues, transcripts of Alan Dershowitz’s appearances on CNN and Fox.

Another tradition is to give generously to Jewish “professionals,” including rabbis, JCC employees and, some say, people who work for Jewish news media. This is in honor of Moses, who gave up a privileged position in the Pharoah’s palace for a high pressure, 24-6 job without, frankly, a lot of gratitude or even money from the people for whom he worked.

Strange but true, the tradition is to give cash rather than checks.

Why do we read the Book of Ruth on Shavuot?

You don’t know much about Shavuot, but you know about the Book of Ruth? Interesting.

The Book of Ruth tells the story of a non-Jewish woman who decides to become Jewish in part because her late husband’s Jewish mother had great leads on jobs in the agricultural sector.

But we also take time to celebrate other Ruths on Shavuot, like Ruth Bader, a precocious Jewish child in the Bronx who grows up to become a U.S. Supreme Court Justice and media celebrity. Many people come to synagogue dressed in black robes with little white collars and oversize eyeglasses, and offer prayers that she stay strong and healthy forever, or until the next Democratic president is elected, whichever comes first. I can’t make any promises that she’ll show up at your synagogue for Shavuot, but she might, and you wouldn’t want to miss out.

Why do we eat dairy foods on Shavuot?

The survival of the Jews is an act of historical defiance, and what else could symbolize defiance more than a group of people genetically predisposed to lactose intolerance gorging on cheesecake and blintzes? Today many are inspired by the words of the medieval philosopher Rashban, who would eat a cream cheese noodle kugel and say, “Boy, am I going to regret this later.”

So it is really up to you. You can stay home and watch yet another hour-long comedy special on Netflix, or you can come to the JCC for all-you-can-eat ice cream.

Didn’t you once make up a joke about Shavuot and dairy foods?

Up on Mt. Sinai, the Almighty and His angels are dictating the Torah to Moses, and they get to the part about the holidays. For each of the holidays, God designates a distinct ritual — fasting on Yom Kippur, blowing the shofar on Rosh Hashana, lighting a menorah on Hannukah. God is just about to wrap up when the angels remind Him that He hasn’t specified anything for Shavuot, the springtime festival of weeks.

God is stumped. Shavuot? He gave out like eight different things to do on Passover, starting with the matzah business. What’s left for Shavuot? Should He make them do something new in temple? Maybe eat something different?

With time running out, God motions one of the angels over. “Okay, how about this,” He says, and whispers it in the angel’s ear.

A little later God is watching Moses on the top of the mountain, getting instructions for Shavuot from the angels. Just then, one of the angels pulls back a curtain and a long-haired guy in a robe and sandals comes walking out.

“No,” says God, slapping His forehead. “I said cheeses!”

Most other Jewish holidays are very complex and take a lot longer to explain. Is there anything else about Shavuot I should have asked?

No, we basically covered it.

Why these people are celebrating a Jewish holiday at IHOP

On Shavuot, remember that Ruth was a poor immigrant