Banned from marrying interfaith couples, Conservative rabbis are finding other ways to celebrate them 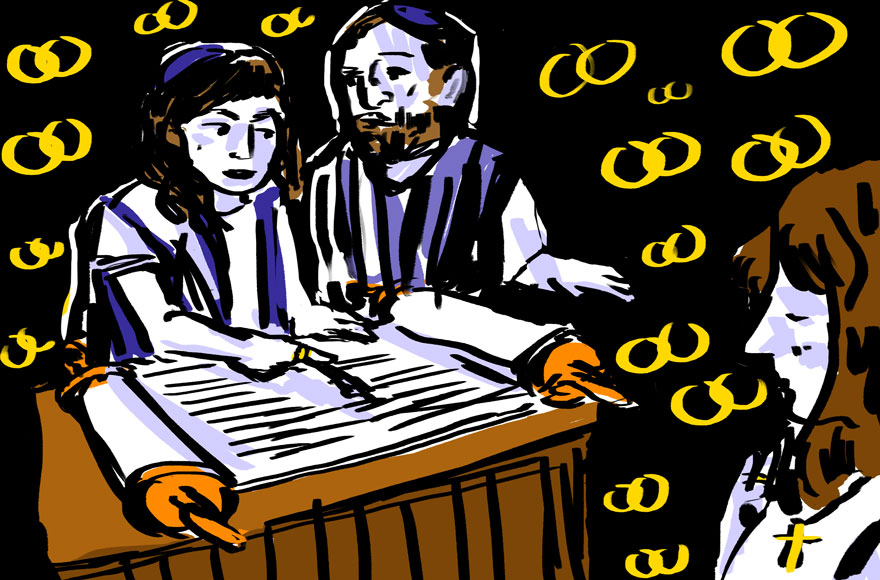 NEW YORK (JTA) — Emily Schorr Lesnick and Jamila Humphrie always knew that Judaism would play a part in the life they wanted to build together. But experiences with Conservative Jewish institutions had made the couple feel less than welcome.

Schorr Lesnick, 28, remembers encountering homophobia at her Jewish Conservative summer camp. Humphrie, 29, who was raised Christian but does not identify with a religion, felt singled out as a non-Jewish and biracial person when she accompanied Schorr Lesnick to synagogue.

The experiences “made us feel very unwelcomed and very uninterested in participating in anything in Conservative Jewish spaces, specifically,” Humphrie told JTA.

The two women, who live in Harlem, got married in a civil ceremony on New Years Eve in 2016. At the time they did not consider having a religious ceremony.

But at the insistence of Schorr Lesnick’s father, they agreed last year to meet with the rabbi of her family’s longtime synagogue, Shaarei Tikvah, a Conservative congregation in Scarsdale, New York.

The Conservative movement bans its rabbis from performing interfaith marriages, so Rabbi Adam Baldachin suggested performing an aufruf for the couple, a ceremony usually done ahead of a Jewish wedding in which the couple is called up to the Torah for a blessing. Baldachin and his synagogue’s ritual committee had recently decided to offer aufruf ceremonies to interfaith couples as an alternative way to celebrate their unions.

Schorr Lesnick and Humphrie say that planning the aufruf, which will take place in June, has made them more open to exploring Jewish rituals and religious practices.

“I do think that it turned on a light switch that ‘it’s not all the same, and we can make our own spaces, we can make a choice about this,’” Humphrie said. 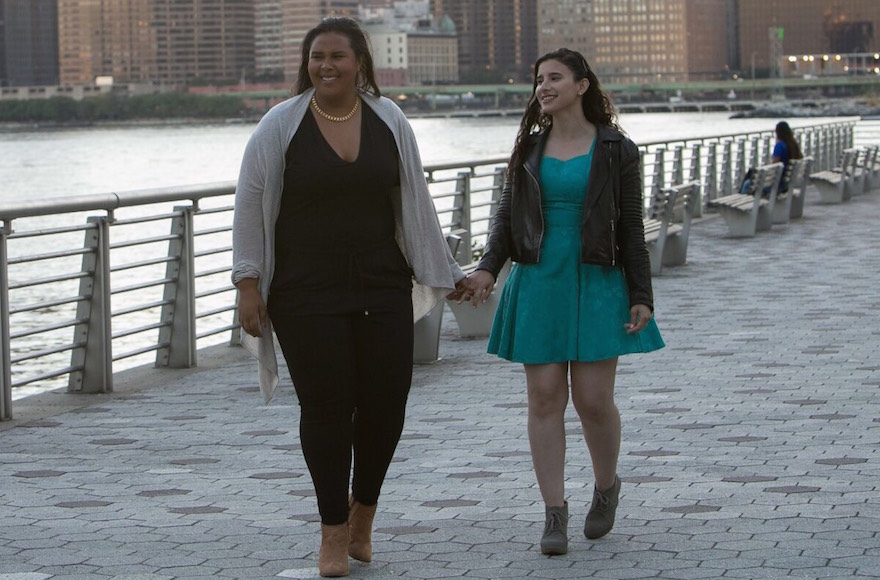 Jamila Humphrie, left, and Emily Schorr Lesnick are an interfaith couple that is taking part in an aufruf ceremony in a Conservative synagogue. (Courtesy of Humphrie and Schorr Lesnick)

The Conservative movement has long urged outreach to interfaith families, on the theory that a welcoming atmosphere will encourage them to engage with Jewish life and raise their children with a Jewish identity. But many rabbis say the intermarriage ban presents a hurdle.

As a result, some are trying to find creative ways to honor and welcome couples, who might otherwise steer clear of their synagogues and perhaps find spiritual homes elsewhere.

“The Conservative movement in some ways has created a barrier for many rabbis with the policies that are constantly reinforced and talked about,” said Rabbi Jesse Olitzky of Congregation Beth El in South Orange, New Jersey. “Families are making the assumption that because of said policies there is no place to ritually welcome an interfaith couple or an interfaith family.”

In October, the movement doubled down on its intermarriage ban, after a number of rabbis performed or said they would perform marriages between a Jew and a non-Jew. Marrying a non-Jewish partner is common among non-Orthodox Jews: A 2013 study by the Pew Research Center’s 2013 study of American Jewry found that more than 70 percent have done so since 2000. While the Reform movement allows its rabbis to perform intermarriages, the Conservative movement, like the Orthodox, prohibits them.

Olitzky has performed aufruf ceremonies for a handful of interfaith couples.

“My job and my goal is to make sure that all members of the Jewish home feel a part of every life cycle event,” he said. “I think the aufruf is a good example of how we can do that in welcoming the couple’s commitment to building that home.”

Rabbi Steven Abraham of Beth El Synagogue in Omaha, Nebraska, observes but does not support his movement’s ban on intermarriage.

“The irony of the aufruf for an interfaith couple is that most likely, unless the rabbi made some decision on his or her own, they’re not going to be performing the wedding,” he said. “So this is as close as you’re going to get to a public ritual where you’re pronouncing fact that they’re going to be married.”

In performing an aufruf for an interfaith couple, Abraham wants to send the message to others that interfaith marriage “isn’t a capital crime.”

“I would be able to very easily tell that young person who’s sitting in the service, ‘Listen, I would much prefer that you probably marry a Jew, but if you don’t marry a Jew I don’t want you to think that you don’t belong here,’” he said.

Rabbi Dahlia Bernstein at Congregation Beth Or in Bellmore, New York, said that many interfaith couples think they are not welcome in her community.

“A lot of people assume that just because you’re a Conservative congregation you will not be welcoming of interfaith families, and my synagogue is not like that, it is radically welcoming,” she said.

Though the issue of interfaith aufruf has not come up in her community, Bernstein said she is happy to offer her congratulations to interfaith couples on their marriage.

“I generally personally reach out and say mazal tov, and check in with them, and give them space to talk and kvell if they want to and listen,” Bernstein said. “I think that a lot of Jewish communities try to use shame as a way of ‘maybe if we are secretive about it then no one will know, and it’s not going to promote intermarriage,’ and it’s not the right approach.”

Rabbi Jeremy Kalmanofsky of Ansche Chesed in New York City supports the Conservative movement’s ban on intermarriage, but says he is open to performing an aufruf for an interfaith couple.

“I don’t think there’s a reason to say ‘tsk-tsk’ and not have the Jewish spouse have a celebratory aufruf before the wedding,” he added.

In 2017, the umbrella body for Conservative synagogues approved a resolution to allow individual congregations to decide whether to grant membership to non-Jews. Some Conservative Jews have qualms about allowing non-Jews to participate in certain Jewish rituals.

Glen Rock Jewish Center in Glen Rock, New Jersey, allows non-Jewish partners to accompany their spouses on the bimah, or ritual stage, for an aliyah honor on their child’s bar or bat mitzvah, participate when a child is given his or her first prayer shawl, and read certain prayers in English. Still, some members remain skeptical about non-Jews’ ritual participation, said Rabbi Jennifer Schlosberg.

It will be Baldachin’s first time performing an aufruf for an interfaith couple.

“This just seemed an easy way for me to be in relationship with interfaith families without the ability to perform their wedding,” Baldachin said.

Prior to allowing aufrufs for interfaith couples, Shaarei Tikvah’s ritual committee spent time studying the issue. The synagogue already allowed non-Jewish partners to participate in other ways in the service, such as being invited on the bimah during their child’s bar or bat mitzvah ceremony and opening the Torah ark. Before allowing an interfaith couple to take part in an aufruf, Baldachin will ask how they plan to maintain a Jewish home.

For Baldachin the difference between marriage and an aufruf comes down to Jewish law.

For Schorr Lesnick being able to celebrate her marriage in her childhood synagogue holds a large significance.

“It’s exciting to think about being able to have an opportunity where we can imagine what Jewishness could mean for us,” she said.