Beneficiary of charity led by David Friedman is not on terrorist list, State Department says 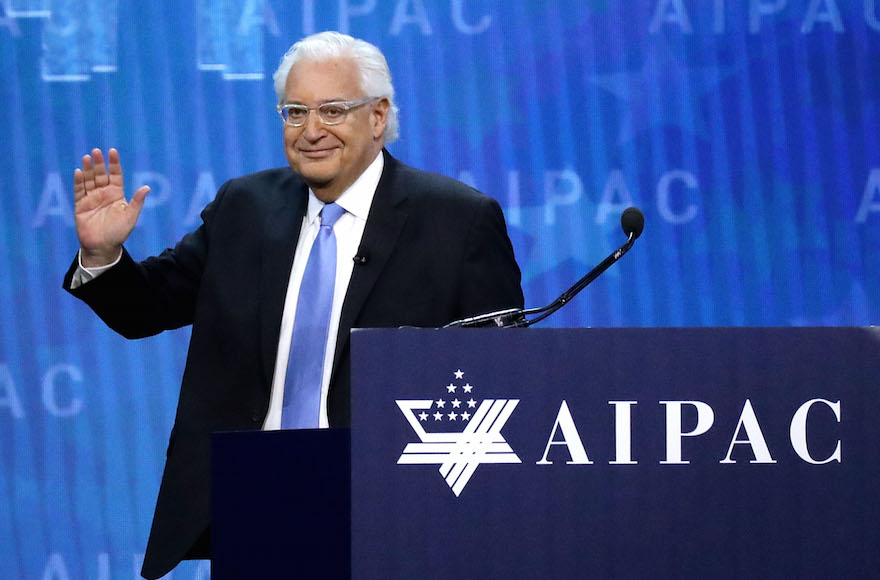 WASHINGTON (JTA) — A group that got money from a charity led at the time by David Friedman, the U.S. ambassador to Israel, is not the same as a group of the same name that appears on the State Department terrorist list, a U.S. official said.

The pro-settlement charity Friedman led from 2011 until 2017 when he became ambassador, American Friends of Bet El Yeshiva Center, donated about $12,000 to a group named Qomemiut in 2013.

Qomemiyut shares a name with another group set up in the mid 1990s by activists associated with Kach, the extremist group founded by the late Rabbo Meir Kahane. Although the name Qomemiyut appears on the most recent State Department designated terrorist list from 2016, the two groups are not the same, according to a State Department official.

The official told JTA that he could not say whether the name Qomemiyut would be removed from the next list in order to avoid confusion.

The current group named Qomemiyut (“sovereignty”) was founded in 2006 by a group of rabbis and far-right activists unhappy with Israel’s pullout in 2005 from the Gaza Strip. Its mission was to prevent any further evacuations of settlements. It also embraced some positions associated with the far right, including pressuring Jewish landlords not to rent to Arab tenants, and defending settlements considered illegal by Israel’s government.

The group of the same name appearing on the State Department list since 1999 was set up to get around a 1994 Israeli government ban on Kahane’s party, Kach, and its offshoot, Kahane Chai. Qomemiyut has been listed on the State Department terrorist list as an alias of Kach and Kahane Chai, although the founders of the earlier group say it has been dormant since around 2000.

The State Department has designated Kach and its offshoots as terrorist since 1997.

JTA reported earlier this month that Friedman had donated to Qomemiyut. The current director of Qomemiyut, Mussa Cohen, told JTA that the current group was the same as the one that existed in the 1990s. He later said he had misunderstood the question, and JTA ran a correction.

Cohen on Wednesday told JTA he was glad that the State Department had clarified that the two groups are separate.

“Inexactness like this raises questions about the reliability of the work of the [State] Department,” he said in an email.

Canada has also listed Qomemiyut on its designated terrorist list as an alias for Kach and Kahane Chai since 2005 and most recently in 2016. A spokesman for Public Safety Canada would not say if Qomemiyut would be removed from the next list, but noted that the list is under constant review.

“While the Government of Canada cannot disclose what entities are being considered for listing under the Criminal Code terrorist listing regime, we can tell you that the assessment of entities that support or engage in terrorism is an on-going process,” Jean-Philippe Levert told JTA in an email. “This process includes addition or removal of entities, and updates to accurately reflect aliases, name changes and mergers with other listed entities.”