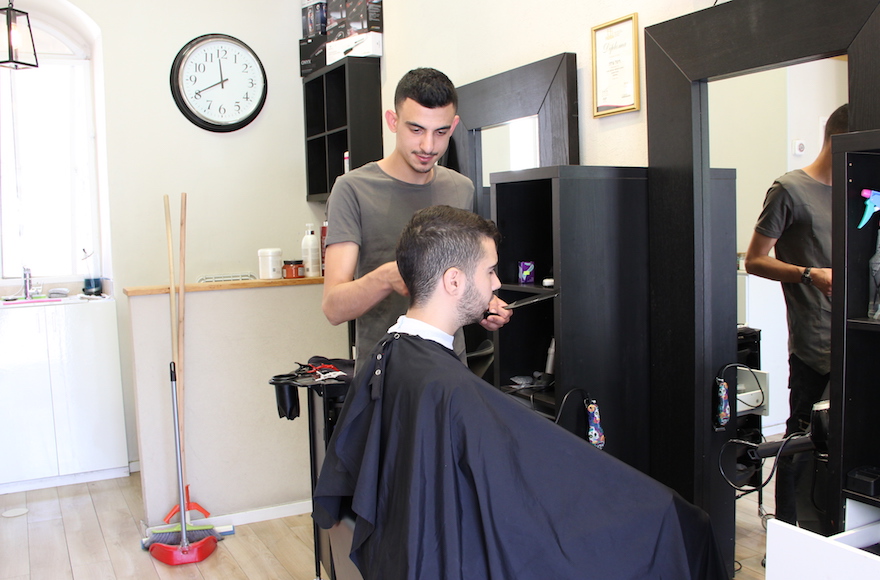 JERUSALEM (JTA) — The idea came to Yotam Gross as a commander in the Givati Brigade following 2014’s Operation Protective Edge in Gaza: Instead of heading back to school after his Israeli military service, he wanted to spend his days bringing people together over warm plates of hummus and pita bread.

All the money he had was what he saved while in the army in addition to the release payment he received when he left. He took it all and, combined with some loans, opened his own hummus joint as a part of a larger franchise, Hummus Eliyahu, in Be’er Tuvia, a moshav in southern Israel.

Gross is not alone. While most released Israeli soldiers use money from the army to fund a grand trip abroad (Thailand and India are favored destinations), and then later for education, a handful of enterprising go-getters choose instead to invest it into a small business.

Released soldiers receive two main payments from the Ministry of Defense. The first is the “maanak shihrur,” or release grant, which new civilians may use freely once their service ends. The second payment is the “pikadon,” or deposit, which can be used for university studies or professional training, purchasing a home or car, a wedding, driving lessons and, less popularly, to start a business. After five years, former soldiers can withdraw the money and use it as they desire if they have not touched it in the meantime.

Based on the Defense Ministry’s 2017 data, just 4 percent of released soldiers use the pikadon to open a business. Most common are the 45 percent who use the pikadon for further studies, followed by the 40 percent who wait the five years to withdraw the cash.

The amounts soldiers receive both during and after their service varies based on the length of service and the position held. According to the Ministry of Defense website, a combat fighter who serves a full two years, eight months receives an initial release grant of 17,518 shekels ($5,000) and 25,337 shekels ($7,000) as a pikadon. On the other end, a “jobnik,” a soldier with a desk job, who served two years receives 9,125 shekels ($2,500) initially and a pikadon of 13,218 shekels ($4,000).

“The idea behind the pikadon is to try to help get [released soldiers] out in the right place,” said Jake Flaster, head of the Michael Levin Lone Soldier Center’s olim program, which advises recently released soldiers whose families live abroad. “Especially, if you’re a combat soldier, that’s a good amount of money.”

Unfortunately, he said, most quickly go through their army savings and rarely view the pikadon as a strategic opportunity.

JTA spoke with several recently released soldiers — none older than 24 — who started their own business using their pikadon. It should be noted that despite an extensive search, no female entrepreneur who fell within this narrow category was found. The gender gap is further reflected in the numbers: While making up 50 percent of the workforce, only 20 percent of Israeli businesses are owned by women — of which only 8 percent are independently owned.

Here are a few recently released soldiers who went from taking orders to giving them thanks, in part, to their pikadon.

Josh Phillips: Smoke gets in his eyes 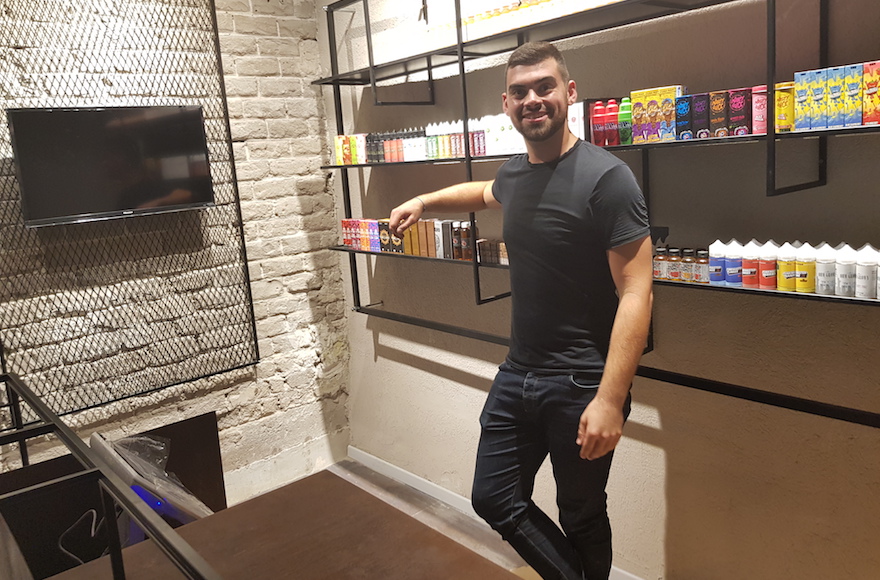 It’s been just three years since Josh Phillips made aliyah from London. In that short time, the Brit has managed to learn fluent Hebrew and finish his two-year service in the Palsar company of the Nahal infantry brigade as a lone soldier. Last week, he opened London Vapes, an e-cigarette store in southern Tel Aviv’s hip Florentin neighborhood.

“I got into it by accident,” said Phillips, 24, explaining his pivot into the e-cigarette business. “I’m an ex-smoker and when I lived in London, I wanted to stop smoking and electronic cigarettes worked for me.

“Towards the end of my service I started smoking again. I realized I didn’t want to. I was looking for stores in Israel to find an e-cigarette and realized very few exist.”

Phillips, who lives in Florentin, found one in central Tel Aviv.

“I mentioned to the store owner that South Tel Aviv would be an ideal spot for an e-cigarette shop, to which [he] responded, ‘Why don’t you do it?’” Phillips said.

“My immediate response was that I don’t have the time or the experience. But after a few days, I thought, ‘Why not?’”

Phillips took his pikadon and some money he had in savings from his pre-Israel days investing in real estate to open a brick-and-mortar shop with the British flag painted boldly on the exterior.

He is working with an existing London Vapes e-cigarette store in Tel Aviv, but Phillips said the Florentin shop is his 100 percent.

“I think what the army does is actually quite amazing where it gives you multiple options to access your pikadon — they’re quite strict about it, which I agree with,” Phillips said. “I think the pikadon is the best way [to initially fund a business] because it’s your money.”

Ido Vital: The push he needed

Ido Vital was just 14 when he started cutting hair. He began as an apprentice in his neighborhood barber shop in Jerusalem by sweeping up hair and arranging towels before touching a pair of scissors.

“[At age 14], I understood that this was something I wanted to do for the rest of my life,” said Vital, 24. “It was just something that flowed.”

During his three years in the Navy, he would rush home from base on Thursdays to open up a small studio in his home and give friends and neighbors a trim.

After his service, Vital moved to Tel Aviv to attend hairstyling school, which he paid for with his pikadon. Vital then took another percentage of his remaining army deposit, along with other money he saved, to open a hair salon in Jerusalem’s happening Mahane Yehuda market.

Two years since its opening, Vital said business is better than expected.

“The army gave me a small [financial] push to give me money for my studies and then to open up my business. It was my first push when I didn’t have any other financial backing,” he said.

“The first thing most people do after leaving the army is go on a large trip somewhere in the world. They want to enjoy and have some fun. I started my business perhaps a little younger than I should have. But I’m happy that way.” 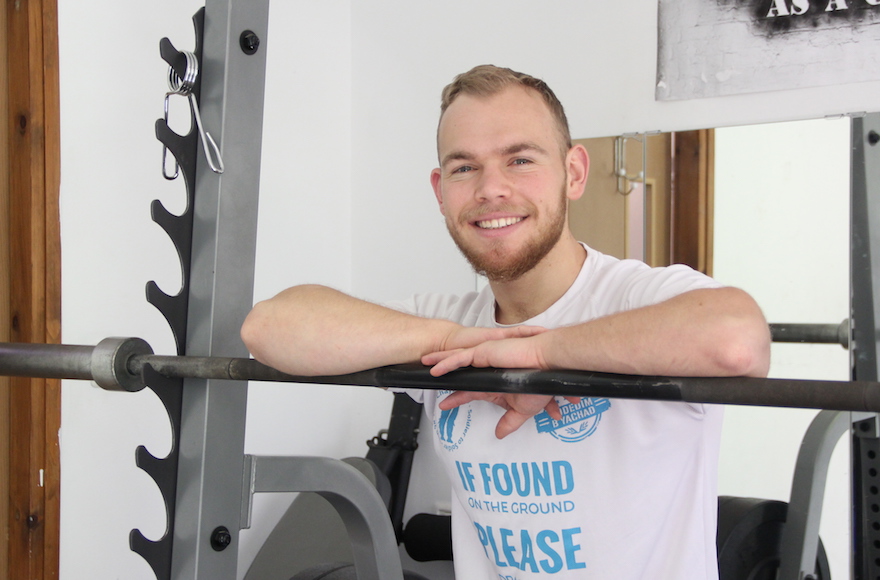 Personal trainer Sean Haber, 22, opens the gate to his ground-floor home off of Bezalel Sreet in Jerusalem to reveal a cozy AstroTurf garden.

“Perfect for outdoor workouts!” Haber cheerily says as he opens the door to his fitness studio, where shiny new equipment stands waiting for the next soon-to-be sweating client.

In another room Haber’s wife, Sara, runs a hair salon. Today she’s with a bride.

Haber’s family moved to Israel from Queens, New York, when he was 12, but shortly after he went back to his native city to finish high school on his own. At 18, Haber returned to Israel for army service and was drafted into Yahalom, the Israeli army’s elite combat engineering unit. He started his service as a combat fighter and ended it as a fitness instructor in Yahalom’s training course.

”I really felt like I was doing something more significant [as an instructor],” Haber said. “There is stigma about people who are no longer combat soldiers, but I was able to have a unique impact and utilize my skills.”

When Haber finished his service in November 2016, he wanted to continue the work he started in the army.

“I immediately took my pikadon and invested it in a lot of [workout] equipment,” he said.

“My main dream was opening a center for the special needs community. I have an autistic brother and before I was drafted into the army, I worked with special needs kids,” Haber said.

He also wanted help lone soldiers get into fighting shape before and after being drafted.

“The army is oriented towards the average Israeli, who is very lean and can just run,” Haber said. “Americans tend to be a little heavier, but the army says to eat so you can be strong.”

This strategy, he said, doesn’t work for everyone. Haber offers his gym and special training options at a discounted rate for lone soldiers.

“I wish there was more awareness that people can use the pikadon to start a small business,” Haber said. “The second you get out of the army, there is [a letdown]. Many Israelis living with parents are asking, ‘What do I do now?’ Lone soldiers are asking, ‘Do I run back to America or am I going to stay in Israel?’ And I said I’m going to use my pikadon to help Israel and at the same time be able to support myself.”

The bottom line, he said, is that the army’s financial benefits provide an opportunity.