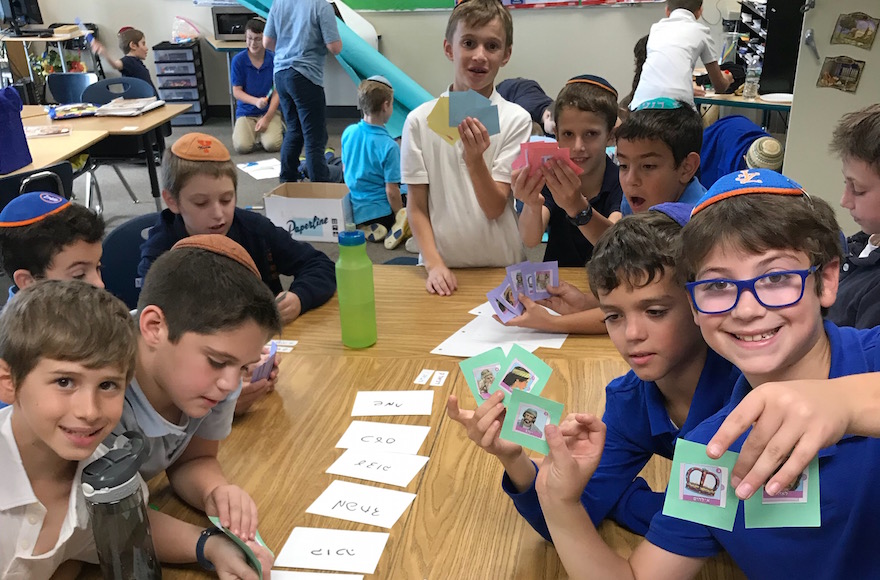 The first time Rabbi Raphael Karlin gave his sixth-grade students a Talmud game, it didn’t turn out quite the way he expected.

The challenge was to take a passage of Talmud cut up into six parts and reassemble the components in the correct order. The process required his students at the Jewish Education Center in Elizabeth, New Jersey, to replicate a line of Talmudic argumentation followed by rabbis who lived 2,000 years ago.

On the first round, no one got it right. So Karlin had them look at what their peers had done and try a second time. Again, no dice.

Only on the third iteration did one student finally come up with the proper order. But Karlin wasn’t done. He had the students look at their classmates’ answers, quiz them about their thinking and try again. Eventually, everyone in the class had settled on one of two answers, one of which was correct.

Then the bell rang.

“They didn’t want to leave,” Karlin recalled. “The kids wouldn’t let the other class come in because they wanted to finish. Usually before the bell rings they’re ready to go. I had never seen that before.”

Karlin was inspired to use games as a teaching tool after participating in the Jewish Day School Collaborative, a project aimed at fostering innovation in Jewish day schools and funded in part by the Avi Chai Foundation. So far, four cohorts of Jewish educators have completed the project’s game-based learning training, which includes a daylong workshop at the Institute of Play, a design studio in New York that creates learning experiences based on the principles of game design.

“I had used games, but always for review, as a summative assessment,” Karlin said. “What they emphasized at this one-day seminar was how games can be used as part of the learning process. That really struck me as something I had never thought of before.”

The use of games in education is not a new phenomenon, but in recent years it has caught fire. A 2016 survey found that the number of teachers using games and online apps in their classrooms had doubled in six years. At Quest 2 Learn, a New York City public school founded in 2009, the curriculum is entirely based on games developed in partnership with the Institute of Play. The free games created by the nonprofit iCivics, which was founded in 2009 by former Supreme Court Justice Sandra Day O’Connor to promote civic education, are now used annually by 5 million students.

“Not only are hundreds of thousands of teachers — and millions of students — using games in their classrooms, game-based learning now also represents an entire scholarly field,” said Emma Humphries, the chief education officer at iCivics. “Game-based learning has been shown to improve everything from student interest and engagement to higher achievement and a narrowing of achievement gaps.”

Games are taking off in Jewish day schools, too. To proponents, the advantages are manifold, from promoting collaboration and problem-solving skills to reducing fear of failure, as students learn organically from their own mistakes much as they improve at video games with repeated play. 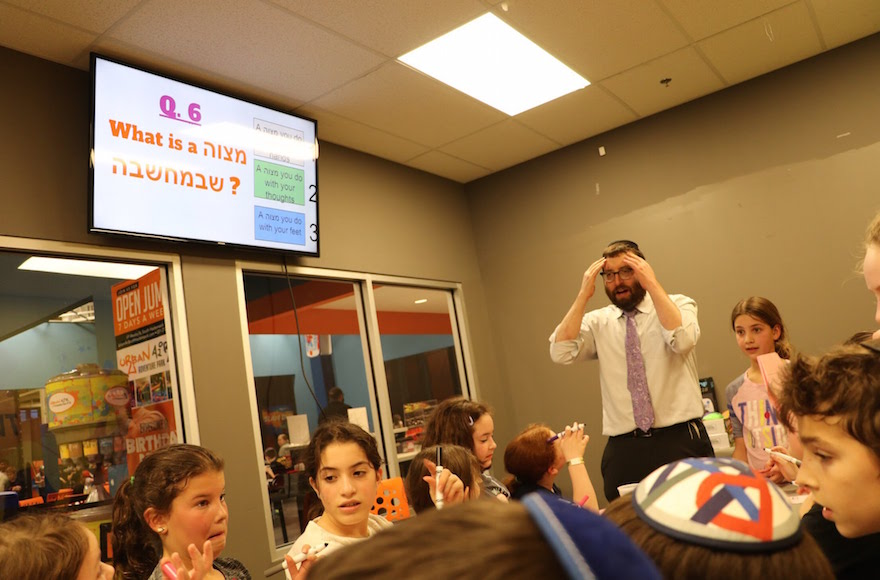 But Jewish educators say games have been slower to catch on in Jewish studies.

“The Judaic classroom is further behind,” said Alanna Kotler, who oversees the game-based learning initiative for JDS Collaborative. “My general sense is that games are somewhat more accessible to the general studies teachers. There’s more openness in general. Judaic studies teachers say, ‘It’s all text based, we can’t do this.’”

That’s hardly the case in Moshe Rosenberg’s classroom at SAR Academy in Riverdale, New York. Rosenberg has gained a reputation among other Jewish gaming enthusiasts as a pioneer in the field. He relies heavily on technological tools to use gaming in the classroom.

One game Rosenberg has found extremely effective is a scavenger hunt inspired by Pokemon Go, a popular augmented reality game in which players encounter images on a screen as if they existed in the real world. Rosenberg’s version was designed to teach students about the Jewish value of chesed, or kindness, by leading them to various locations around the school where acts of kindness could be performed. At each location, students scan QR codes to bring up characters on a screen that present them with clues that lead them to the next location.

“Kids are excited about games,” Rosenberg said. “Kids aren’t afraid of them. Failure is not an issue because every time you mess up a level of the game you are just a step closer to mastering it.”

Though much of the explosion in educational games is digital, many are simple variations on older games and don’t have anything to do with computers.

Mariel Seta, who teaches Hebrew at several Jewish schools in Los Angeles, got the idea of having her students create their own games after she attended an Institute of Play workshop. Among the games they invented was a variation on musical chairs: Hebrew nouns and verbs were placed on the chairs and the players were divided into groups. One group was allowed to use only the chairs with nouns and the other only those with verbs.

“Playing a game doesn’t have to be a really complicated task,” Seta said. “You can use something very conventional, a game that you really know, and you can just add and modify and the kids will still learn.”

Ariella Fallack, a Judaic studies teacher at Magen David Yeshivah in Brooklyn, had her students create their own board game to demonstrate their learning and teach their peers. One student made a version of the board game Life to teach the biblical commandment of rebuke. Another created a version of the TV game show “Jeopardy!” A third created a card game to teach the commandment of loving one’s friend as one’s self.

“It went really, really well,” Fallack said. “I’ve been teaching this material for five years. And that was really the first time that I saw the students take ownership of their learning and really make a connection to it.”

Yaakov Nadler, who teaches fourth grade at Yeshivat Noam in Paramus, New Jersey, uses games extensively in his classroom and shares many of his ideas on his blog, hebrew4.blogspot.com. He has had his students play basketball in Hebrew, the card game War in Hebrew and Uno in Hebrew — the latter with a special modification to help students learn different tenses. He has made up games of his own, including one in which students have to act out the feelings of biblical characters in Hebrew while their partners guess the emotions.

“I’ve been using games to encourage dialogue so that my students don’t just learn the language as the material I’m giving to them, but they have to use the language with each other,” Nadler said. “Games give them a defined space to practice the language. If they’re learning Bible, they’re able to take the material and play a game with it.”

Despite the mounting excitement at the potential of games to enhance Jewish education, Rosenberg cautions that excitement and engagement alone are not guarantees that students are mastering the material.

“There’s a lot of potential here, and I’m committed to exploring it with my students,” Rosenberg said. “But I’m also aware that you have to keep your feet on the ground. You always have to keep on assessing.”