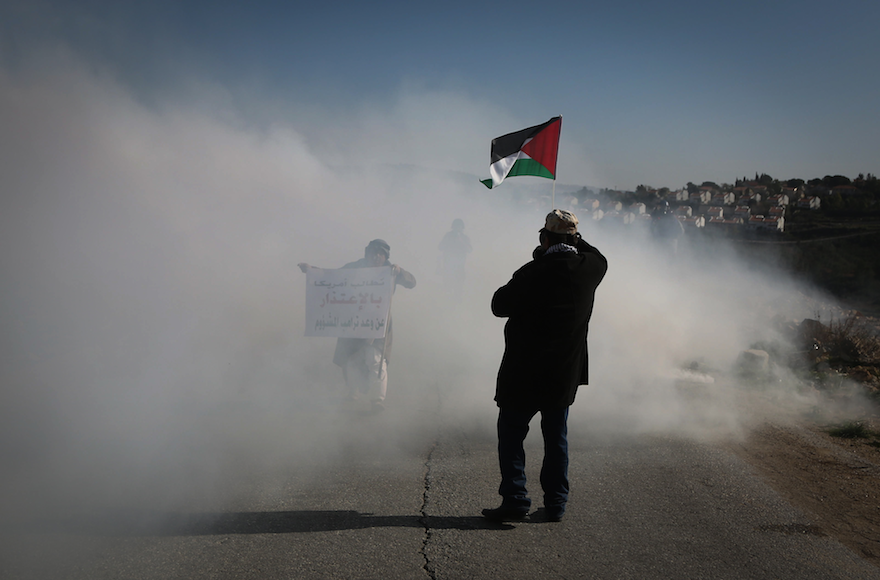 Palestinians protest, calling for the release of Palestinian prisoners from Israeli jails, in the West Bank village of Nabi Saleh, January 13, 2018. (Photo by Flash90)
Advertisement

JERUSALEM (JTA) — A Palestinian man was shot and killed by Israeli soldiers after throwing rocks at troops operating in the West Bank.

The dead man, 21, was identified by Palestinian media as Azzedine Tamimi, 21, of Nabi Saleh, located northwest of Ramallah in the West Bank. He reportedly was shot in the neck, and was given medical attention at the scene.

Tamimi was part of a group of more than 10 Palestinians who began rioting when Israeli soldiers arrived in the village, authorities said. He reportedly hit an Israeli soldier in the head with a rock.

The soldiers responded with “riot dispersal means,” the Israel Defense Forces said in a statement.

He is related to Ahed Tamimi, the Palestinian teen also from Nabi Saleh who was arrested and sentenced to 8 months in prison as part of a plea deal in part for slapping and harassing Israeli soldiers standing guard in a West Bank Palestinian village. On Wednesday, a parole board denied Ahed Tamimi’s request for early release, saying she refused to express regret or take part in any rehabilitation program.

Residents of the village regularly stage demonstrations against Israeli military control in the West Bank.