Fiery ‘terror kites’ shake residents in southern Israel, but not their resolve to stay put 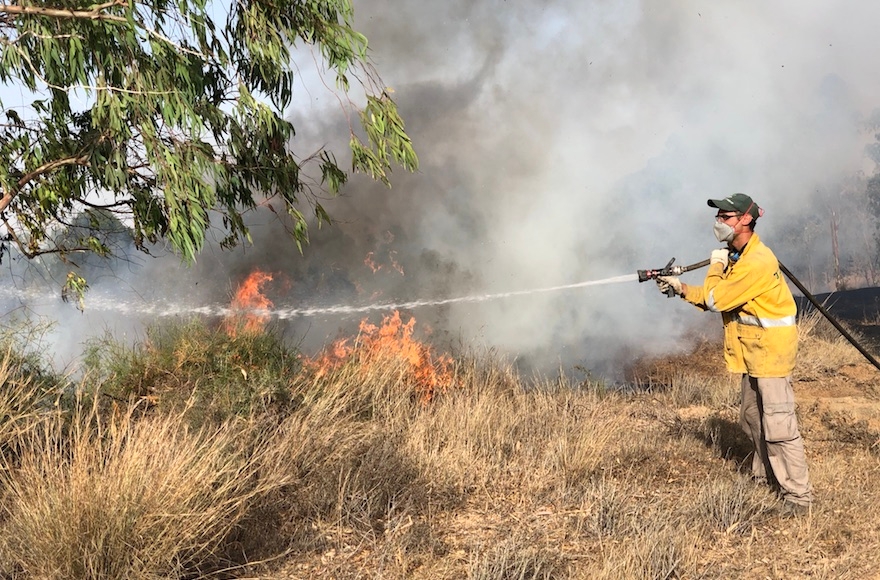 NAHAL OZ, Israel (JTA) — Dani Ben David fiddles with his radio, switching between it and his cellphone as he drives through the Beeri Forest, a nature reserve located on the border of Israel and the Hamas-controlled Gaza Strip.

As his Jeep jolts over the dirt road, he quickly and calmly jumps between multiple conversations, coordinating efforts to extinguish the multiple fires that have sprung up across his territory. As regional director for the Western Negev for Keren Kayemeth LeIsrael-Jewish National Fund, Ben David is responsible for maintaining the forest’s tens of thousands of acres in the face of Palestinian efforts to torch them and the surrounding farmland.

Since April, more than 450 open-air fires have been set along the border region by kites and balloons carrying incendiary materials launched from Gaza. Flying aimlessly over the kibbutzim, they have turned large swatches of what was once an oasis of green in a dry and dusty south into a charred landscape.

Many of those kites have landed in the wheat fields of farmers, causing millions of shekels in damage to the local agricultural sector as well as in the area’s vast nature reserves.

“Look over there,” Ben David says, pointing to a pillar of smoke in the distance. His finger sweeps across the horizon, noting the locations of several other fires in the distance. “We see three, four, five fires. There are eight fires now.”

“It’s like this every day,” he continues, describing how more than 4,000 dunams, or nearly 490 acres, have already gone up in smoke over the past two months. “It’s doing great damage to the forest, to the plants and animals. Everything here is burned. We don’t really see a solution, either from the government or the army, against this kite terror.”

Ben David says KKL-JNF employs 12-13 private firefighters who are responsible for the forest, a number bolstered by volunteers from local communities and Israel’s overstretched Fire and Rescue Services. 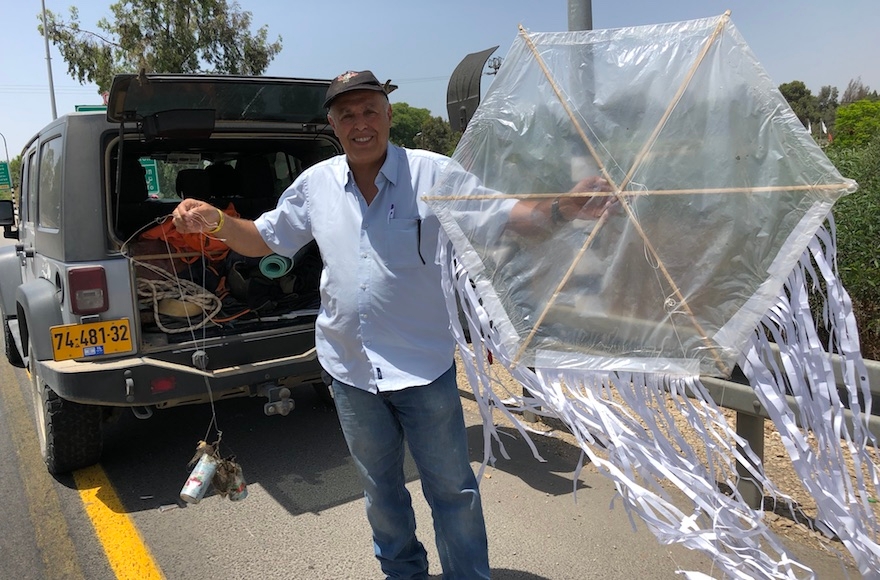 At another site nearby, a tractor puts out the flames by driving over them followed by a man carrying a hose attached to a small water tank on his back. It’s siren blaring, a firetruck pulls up and a regular-duty firefighter gets out and starts spraying a flaming clump of trees.

Over the course of less than an hour, Ben David visits more than five fires, one of which blazes alongside a small one-lane road, completely obscuring visibility.

“At the end of the day, we are succeeding at extinguishing everything,” he says, but adding it would help if he had access to firefighting planes. Ben David explains that such aircraft are prohibited from taking part in the battle due to the proximity to the Gaza border.

“These kites aren’t toys, they’re weapons,” he says. “If the IDF or government will understand that, I hope they will do something.”

In nearby Nahal Oz, Yael Lachyani walks along pointing out the damage done to her kibbutz’s farmlands. She points to a small patch of burnt ground on which small shoots are already beginning beginning to sprout. Lachyani, the agricultural collective’s spokeswoman, says that on the festival of Shavuot each year, a small ceremony is held here for the community’s children, but this year it was set ablaze only hours before the gathering.

“We put out the fire and held the ceremony anyway. We are proud that we didn’t let them destroy our holiday,” she says, noting that 600 dunams, or almost 150 acres, have already gone up in flames.

“We try to be optimistic. It’s all about resilience,” Lachyani says. “We don’t complain. We don’t let them run our lives. You burn and we plant. Our morale is high. There is something about tragedy that connects you more to the people you live with.”

While acknowledging that the damage has only been to vegetation, she says it is only a matter of time until someone gets hurt in the community of fewer than 500 residents next to the border fence. The Israel Defense Forces and the government have not responded to the fires in the same way in which they act in the wake of a rocket attack, she says, and this “sends a message” to Hamas.

Lachyani says that despite the rocket attacks and fires, Nahal Oz is thriving, with residency at capacity, in part due to the “new secular Zionism of living wherever it’s necessary and wherever it’s meaningful.” But while the community has grown since the last flare-up with Hamas in 2014, it does not mean the residents are totally sanguine about the situation.

“We are thriving under fire … for the moment,” she says, complaining of the feeling that “no one cares.” Citing Regional Cooperation Minister Tzachi Hanegbi’s statement that he was “not excited by the kite terrorism” — that is, that people shouldn’t overreact to what he called a “pathetic” enemy — Lachyani asserts that the “government isn’t doing anything.”

Defense Minister Avigdor Liberman has pledged to strike back in response to the kites “when it is convenient for us.” The army is testing two types of drones for use against the kites as “part of a comprehensive response, which includes cooperation with firefighting forces and the activity of combat forces on the ground,” an IDF spokesman told JTA.

According to police spokesman Micky Rosenfeld, bomb disposal experts have responded not only to to kites dragging alcohol-soaked rags but also explosive devices, “which is a much more serious threat to both soldiers and civilians.”

“Every day we have at least 30 firefighters with 10 fire engines to deal only with fires near the fence,” Israel Fire and Rescue Services spokesman Yoram Levy says. “In order to respond quickly we opened five temporary stations in kibbutzim. We have a volunteer unit at Kfar Aza with a fire truck and equipment, and we are about to establish two more units. When we receive intelligence that there might be mass demonstrations [like last Friday], we are reinforcing our staff as needed.”

Levy says the fire service has used airplanes twice, near Kibbutz Or Haner and Kibbutz Karmia, after receiving permission from the Israeli Air Force.

One resident of Nahal Oz sees the attacks as an opportunity to give something back. Only weeks before the fires started, Raymond Reijnen immigrated to the kibbutz with family from Rotterdam in the Netherlands. A 16-year veteran of his city’s fire brigade, Reijnen — a tall, thin blond with tattooed arms — saw no future in Europe and decided to make aliyah so his children could grow up in a Jewish state.

Assigned to the kibbutz dairy, where he tends cows, Reijnen threw himself into agricultural work and learning Hebrew. Teams of firefighters from across the country have converged on the south, taking shifts on duty before returning to their home cities. Nevertheless, each kibbutz maintains its own volunteer team and Reijnen joined the one at Nahal Oz immediately. 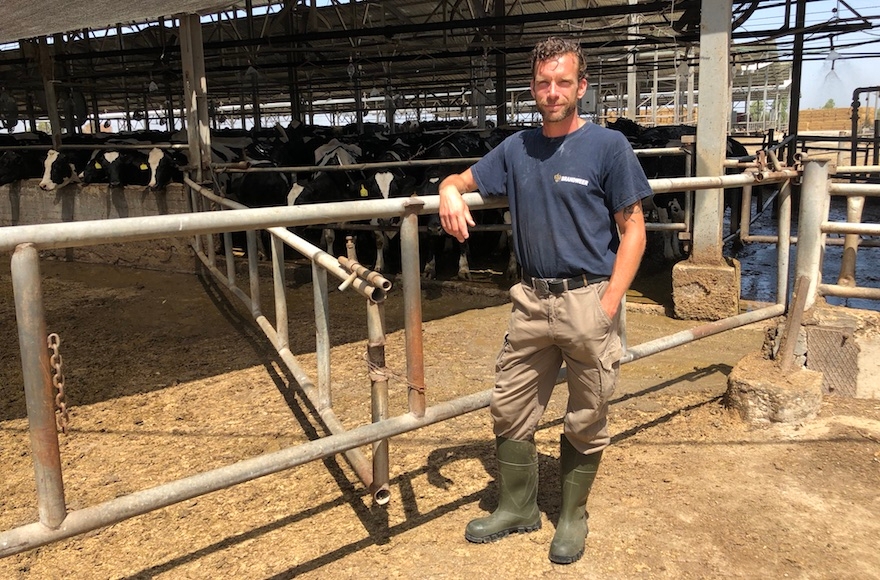 He says he felt good that he could “give something back to the kibbutz with my skills as a firefighter. I can pay them back for all the things they do for me here. I was kind of useless for the kibbutz and I’m not used to that.”

Kibbutz Saad, located three miles away, has had to deal with far fewer fires than Nahal Oz, and the fields that burned were already harvested, says Buki Bart, a member of the kibbutz administration. While expressing frustration, Bart says he understands that “everybody is doing the best that he can” and that the damage thus far has been minor enough that he doesn’t feel he has to report every small fire to the kibbutz members. Residents have come under fire for years, he says, especially during the last three wars in Gaza.

According to Adi Meiri, a spokeswoman for the Shaar Hanegev Regional Council, whose territory includes Sderot, extinguishing the fires is not the only struggle for residents of the region. While the state has pledged reparations for farmers who have lost crops, local representatives also have been pushing hard for additional payments for those forced to harvest early, losing part of the value of their produce, as well as for those who have lost agricultural equipment.

Aside from the financial side, Meiri says the constant fires have caused stress for residents, especially children, many of whom are receiving help from psychologists at a local “resilience center.” She describes how she has gone to great lengths to shield her own children from the reality of the past two months.

Picking up on Meiri’s theme, council head Alon Schuster told JTA that it is important that the IDF, when attacking targets in the Gaza Strip, announce that the strikes are in part in retaliation for the kites. He says “it is important for the internal psychological resilience of our residents.”

The authorities have been somewhat slow “to assimilate, to integrate, the reality” of what is happening, Schuster says.

“They are concentrating now on the threat of hundreds of thousands of Palestinians entering into Israel to sabotage or kidnap people, and they underestimate the threat of fire,” he says.

While many residents have called for increased strikes against Hamas, others believe that only an improvement in conditions in Gaza will bring true peace.

“We have been relatively lucky,” Adele Raemer of Nirim says. “It hurts to see the land being ravaged by fires — the same land that those who are doing it claim to love, claim to be theirs.

“I’m hoping to hear that the government will make decisions today that will alleviate the impossible conditions in Gaza and enable the Gazans to have some hope. People who have nothing to live for only have reasons to die for.”