It’s raining in Israel. So why aren’t I relieved? 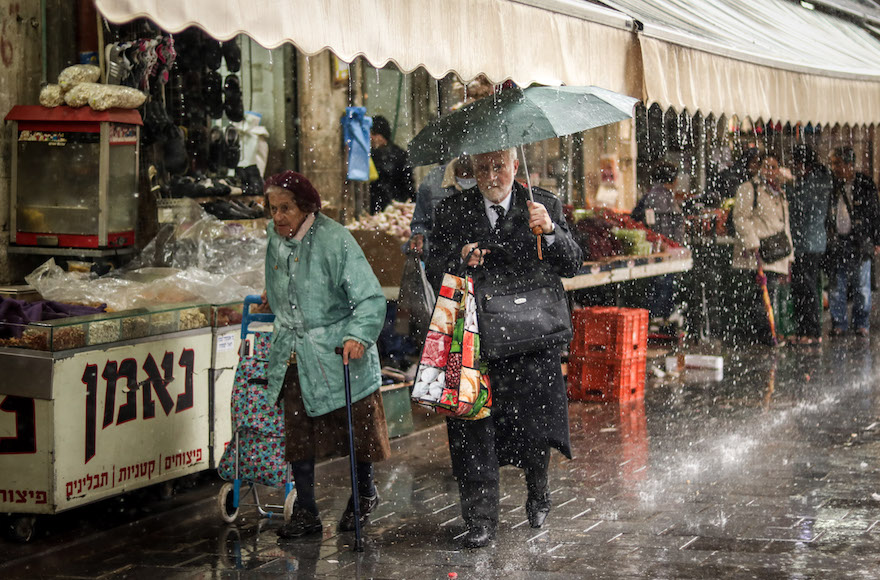 People walking in the pouring rain while shopping at the Mahane Yehuda Market in Jerusalem, April 9, 2018. (Liba Farkash/Flash90)
Advertisement

While this may not seem like an unusual occurrence, let me remind you that I am writing from Israel and it is June.

It never rains in June. Oh sure, a couple “tip-tipot” (drops) here and there and certainly some dew, but never puddle-forming, windshield-wiper swishing rain. Not in June.

Stranger things have happened, like the president of the United States meeting with the leader of North Korea.

It – the rain again – caught me totally by surprise. It shouldn’t have because I saw the little cloud icon and lightning bolt on the weather app on my iPhone. But I chuckled knowing it must be a mistake and left the laundry outside on the line to dry when I left the house in the morning.

As I drove, however, the drops started coming. Just a few at first, and I reasoned that my laundry would be OK. Then came the deluge that made me realize this was serious rain — and I would have to wash my laundry again.

Israelis should be thankful for the rain. It comes in the midst of a severe drought. We haven’t felt this drought as much as the last one, when every other commercial on the radio and television was a plea to save water and people came door to door — sent by some government ministry — to put water-saving discs in our faucets. This time around we have lots of desalinated water, but after five years even that is not enough.

The rain has come the same week as the government approved a $30 million plan to deal with the country’s drought problem, including pumping desalinated water directly into the Sea of Galilee and rehabilitating seven streams in northern Israel.

It began raining again in the middle of the night and into Wednesday morning. Huge drops of rain pelting the house and soaking my garden. It woke me up because it’s a strange sound in June. And because I began to worry about the roof leaking.

The unseasonable rainfall caused flooding and power outages in northern cities and towns. Flash floods are expected in the Negev Desert — the same kind of floods that in April carried away 10 teenage hikers about to enter a pre-military academy program.

You have to be careful when you wish for rain.

We said the traditional prayer for rain that begins the first week in December, at the start of the fifth year of the drought — the worst drought season in 40 years, according to the experts. We recited the other traditional prayer for rain said between the autumn holiday of Shemini Atzeret and Passover. We have held special prayers at the Western Wall in four of the past eight years.

But even the Talmud says there’s a limit, a least for the Land of Israel.

In the Tractate Taanit, rain after Passover or the corresponding month of Nissan is called a bad omen. And, in fact, it is only in recent years that I remember there being any rain — usually one last halfhearted drizzle after Passover.

There are agricultural reasons why rain over the summer is bad in Israel involving fruit and other crops ripening too quick or getting moldy. But it is the spiritual significance that has me tossing in bed — along with the leaky roof concerns.

It rained on Tuesday in the Etzion Bloc of the West Bank as thousands of Border Police officers removed hundreds of mostly teenage protesters from 15 homes in the Netiv Haavot outpost slated for demolition. One protester told The Jerusalem Post that the rain was God’s tears.

Or perhaps God is crying for the thousands of acres of agricultural land and wooded areas that have been destroyed by fires set from incendiary kites and balloons flown from Gaza into southern Israel. Or for the Palestinians killed in the two months’ worth of protests on the Gaza border.