In Holland, a former jihadist reaches out to Jews for forgiveness 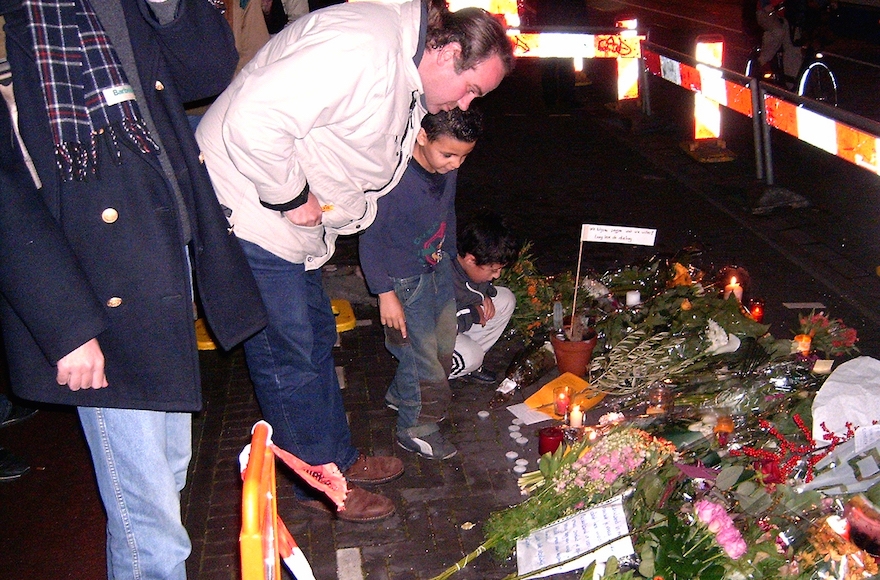 AMSTERDAM (JTA) — Jews were never far from the mind of Jason Walters when he was still a key member of the Netherlands’ deadliest network of jihadist terrorists.

Even after Dutch security forces arrested Walters in 2004 for throwing a hand grenade at police during a counterterrorist raid on his hiding place, he believed that “the outcome of the trial will be determined in Tel Aviv.”

That belief was the result of an “extreme susceptibility to conspiracy theories,” said Walters in a recent interview.

It was that susceptibility that led Walters, still a teenager, to join the deadly Hofstad Group that in 2004 killed Dutch filmmaker Theo van Gogh.

Now Walters is 33 and a recent university graduate. He says he became de-radicalized in prison, where he served eight years before his release in 2013.

“As a salafi jihadist, anti-Semitism is wrapped up in your entire worldview,” he said.

Which is why Walters chose to speak out for the first time to Esther Voet, the editor-in-chief of Holland’s NIW Jewish weekly, in an unusual interview that also featured an apology to Dutch Jews and other victims, and his advocacy of Israel’s right to exist within secure borders.

Ahead of the 15th anniversary of the Hofstad group’s exposure, Walters is one of two individuals with ties to that network who are giving others hope in the fight against radical Islam by reaching out to Jewish audiences and warning other Muslims against radicalization.

Soumaya Sahla, a Muslim woman who spent nine months in jail in connection with the Hofstad Group, broke her silence last year. Sahla, 34, had traveled with the CIDI pro-Israel lobby group to Jerusalem for a seminar on the Holocaust.

“When a Jewish man can’t wear a kippah on the street” but Muslims can wear traditional garb, “then something’s wrong,” she said last year during a Hanukkah party in Utrecht.

Walters’ interview made waves in the Netherlands because, unlike Sahla, he was convicted of carrying out an armed attack and planning to assassinate high-profile anti-Islam politicians, including Party for Freedom leader Geert Wilders and Ayaan Hirsi Ali. Major Dutch newspapers such as Elsevier and Algemeen Dagblad covered the NIW interview, as well as Belgian media.

Part of the interview’s significance is attached to the “national trauma” that the Netherlands experienced following Theo van Gogh’s murder by another member of the Hofstad Group in 2004. Van Gogh, who angered Dutch Muslims with his film criticizing the treatment of women in Islam, was shot and stabbed as he cycled to work in Amsterdam on Nov. 2, 2004. Bart Olmer, a former intelligence services correspondent for the Telegraaf daily, told JTA that the Hofstad group “changed the reality in this country.”

In addition to Walters, Sahla and Mohammed Bouyeri, Theo Van Gogh’s killer, another 21 people were arrested in connection with the group, whose name refers to The Hague, its main area of operations. It was the first, largest and deadliest jihadist cell in Dutch history. Its discovery prompted an unprecedented tightening of security and counterterrorism efforts in a country whose leaders for decades had bicycled to work without bodyguards. It also triggered an explosion of anti-Muslim sentiment that has defined much of the country’s politics until today.

Jason Walters’ involvement in the cell was particularly shocking to many in Holland because, unlike many others in the cell, he did not come from a radical Muslim environment. Born to a Dutch-born woman and an American soldier serving in the Netherlands, he was converted to Islam at the age of 13 with his brother, Jermaine — who in 2015 died in Syria while fighting with other jihadists.

The brothers became interested in Islam following the 9/11 bombing of the World Trade Center in New York, Walters said. Moroccan extremists took the two brothers under their wings and radicalized them, according to the prosecution in Walters’ trial. By 2003, when the brothers were both older than 18, they were part of the Hofstad group, a local network of terrorists with weapons and hit-lists and extensive connections to international Sunni terrorist groups. 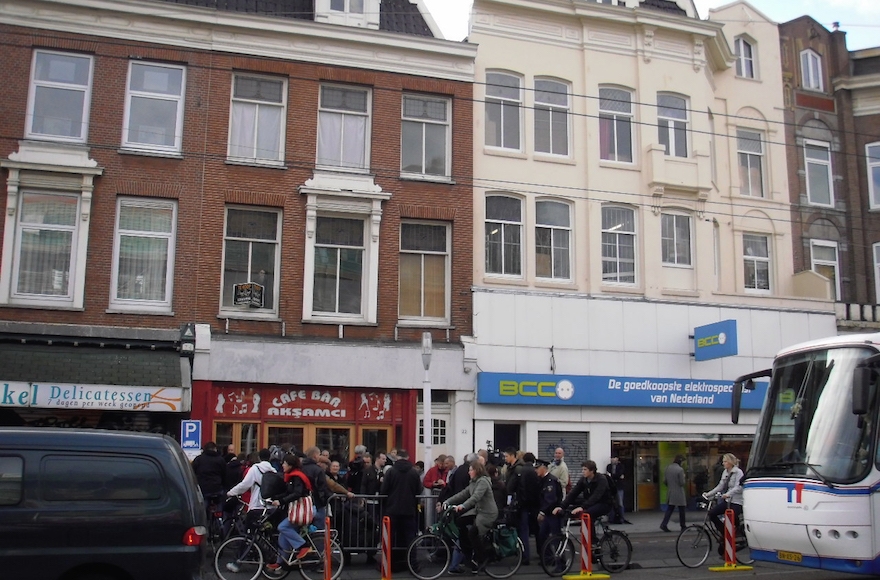 People commemorating the murder of Theo van Gogh in Amsterdam on the attack’s fifth anniversary in 2009. (Steven Lek/Wikimedia Commons)

“It began by studying the Koran day and night. As an extremist, that worldview is everything. You’re not even a person anymore, you become dazed,” Walters told Voet, during the interview at her home in Amsterdam. “You believe you experience miracles. Religion defines you: You’re no longer entitled to your own opinion and feelings. If they contradict religion, you need to adjust.”

Hating Jews was an important part of Walters’ identity, he said.

“The dogma is: The Jews refused Mohammed’s message, they’re intrinsically bad, cursed,” Walters added. Islamic verses describe how “Jews are messengers of the devil.” Israel’s existence served as proof of the nearing of the day of reckoning because “they had assembled in one place in the Middle East to be annihilated,” he said.

“You demonize everything Jewish as the source of everything evil,” Walters said.

With time on his hands, Walters, who spent much of his prison term in isolation, began studying Western sciences with the intention of proving they were all rooted in the Koran, he said. But exposure to empirical thinking caused Walters’ religious conviction to “crumble,” he said.

Walters told Voet that he suddenly noticed how he believed simultaneously in three contradictory theories about the Holocaust: That it was a hoax to justify Israel’s creation; that it was real but justified, and that it was real and unjustified, exemplifying the evilness of Christian societies.

Amid rising levels of anti-Semitic violence in the Netherlands, “I began feeling increasingly guilty,” Walters said.

“I had been very unfair and I want to set it right,” he said of his decision to reach out to Voet for his first interview. “I need to make up for being on the absolutely wrong side. It became a major issue to me, in relation to Jews and Israelis.”

He also apologized to the four officers who were wounded in the explosion he caused by throwing a hand grenade at them in 2004.

“It’s something I have to live with,” he told NIW.

The “pitfall of anti-Semitism, where I once fell, is becoming mainstream,” he added. “The same stereotypes are back. There’s no more balance in the debate about Jews or Israel.”

In the NIW interview, Walters went on to defend Israel.

“When the religious source for my anti-Semitism fell away, I began a reorientation,” he said. Looking at the map of Israel, “I began to think what would I do if I were an Israeli.” Walters attributes Israel’s control of disputed land to the Middle East’s instability. And he called Israel’s treatment of Palestinians “restrained” in comparison to Arab rulers who butchered them en masse.

Israel “does make mistakes,” he said. But “of course it chooses to have power” in view of how “history has proven that Jews need their own homeland, because no one else will protect them.”

Walters declined to have his picture appear in the NIW paper, explaining he wanted his exposure to “be a gradual thing.” But as Islamist extremism continues to claim victims across Western Europe, Walters also said that he feels increasingly compelled to oppose it publicly.

“I hoped to have a boring job, perhaps as a professor of philosophy,” he said. “But I’m realizing that we have a problem of Muslim extremism.” At his age, “I’m thinking about starting a family and what kind of society I want my children to live in.”

Although he has become a poster child for de-radicalization, Walters says he has little faith in its likelihood for most followers of  the hateful ideologies to which he used to subscribe. De-radicalization is no clinical procedure, he said.

“It’s about an existential choice,” he said.

Getting radicalized Muslims to abandon their doctrines is about as likely as getting hardened left-wing voters to support the far-right, he explained.

“There is no painless solution,” Walters opined. “We may be nearing very inconvenient choices, like redefining freedom of religion and reconsidering how equipped the constitution leaves us to tackle this problem.”

While Walters says he has “no answers” to these sobering questions, he added that he does feel compelled to act to fix the issue. “I have a responsibility, I’ve seen both sides of the problem,” he said.