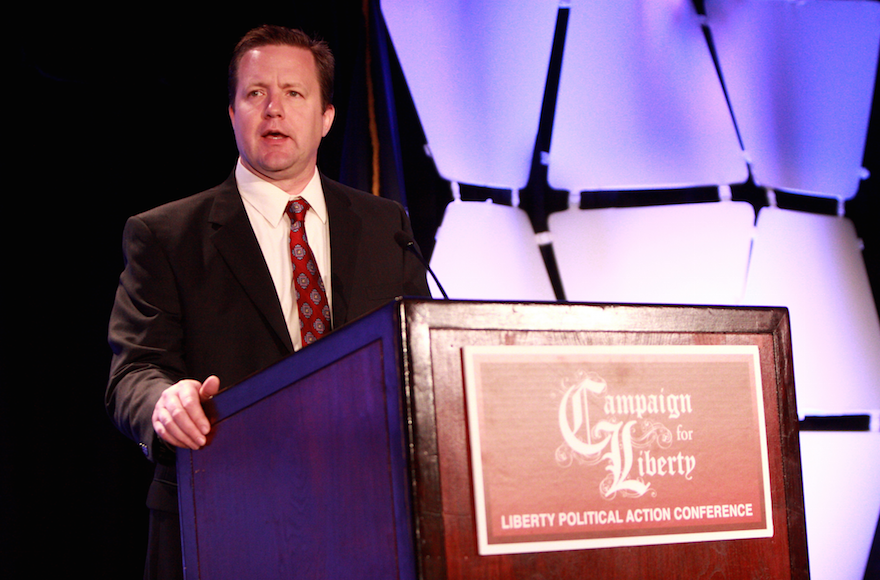 WASHINGTON (JTA) — Corey Stewart, a politician with associations with neo-Confederates, the “alt-right” and a well-known anti-Semite, is the Republican nominee for Senate in Virginia.

The Republican establishment battled hard to thwart Stewart in the three-way primary race Tuesday to decide who faces Democratic incumbent Tim Kaine in November, backing State Delegate Nick Freitas. Stewart is seen as unlikely to unseat Kaine, who is popular in the state.

In the days before the primary, video surfaced of Stewart exchanging compliments in early 2017 with Paul Nehlen, an alt-right figure who had recently unsuccessfully challenged House Speaker Paul Ryan in a GOP primary in his Wisconsin district. Nehlen later revealed himself on Twitter to be openly racist and anti-Semitic, peddling conspiracy theories about Jewish control of the media.

Also revealed last week was that in May 2017, Stewart paid Nehlen $759 for a fundraising list in Stewart’s unsuccessful bid for the GOP nomination for Virginia governor.

Responding to the revelations, Stewart told The Washington Post that he no longer considers Nehlen his “personal hero,” as he had said in the video when both men were attending inauguration festivities for President Donald Trump.

“That was before he went nuts and started spewing a bunch of stupid stuff,” said Stewart, the chairman of the Prince William County Board of Supervisors.

Nehlen had yet to reveal his anti-Semitism at that stage but already was notorious for anti-Muslim and anti-immigrant stridency. His anti-Semitic expressions also led Breitbart News, which has become a redoubt of the pro-Trump GOP right, to cut him off after having backed him in his challenge to Ryan.

It was not the first brush with extremist notoriety for Stewart, who has made his defense of Confederate monuments in the state a central plank of his platform. He had to apologize for having appeared with Jason Kessler at a news conference; Kessler was an organizer of the protest in Charlottesville, Virginia, last August against removing Confederate monuments that drew neo-Nazis and white supremacists and culminated in the killing of a counterprotester.

Stewart, a strident defender of Trump, drew praise from the president for his win.

“Congratulations to Corey Stewart for his great victory for Senator from Virginia,” Trump said on Twitter. “Now he runs against a total stiff, Tim Kaine, who is weak on crime and borders, and wants to raise your taxes through the roof. Don’t underestimate Corey, a major chance of winning!”

Congratulations to Corey Stewart for his great victory for Senator from Virginia. Now he runs against a total stiff, Tim Kaine, who is weak on crime and borders, and wants to raise your taxes through the roof. Don’t underestimate Corey, a major chance of winning!

Not every district in Virginia mounted primaries, with some local parties having had nominating contests before Tuesday. One such case was in the 5th District, encompassing Charlottesville, where Leslie Cockburn, a one-time journalist, is the nominee in a bid by Democrats to pick up a seat held by a Republican who is retiring.

State GOP figures have said Cockburn is “anti-Semitic” because of a 1991 book she co-authored with her husband, Andrew Cockburn, that was harshly critical of the U.S.-Israel alliance. Cockburn, who has reached out to the district’s small Jewish community, says she is pro-Israel although critical of the current government’s policies.

Rosen, Luria and Cockburn are among dozens of women that the Democrats are running in hopes of retaking the House and the Senate in the fall.

Other states hosting primaries on Tuesday were North Dakota, South Carolina and Maine.