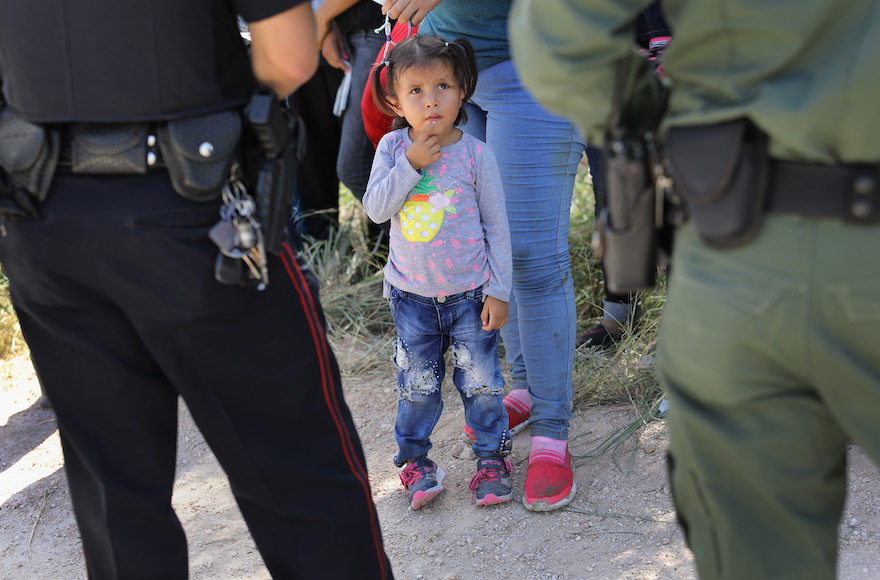 NEW YORK (JTA) — The Orthodox Union released a statement criticizing the Trump administration’s policy of separating the families of illegal immigrants after they cross the U.S. border.

The statement came one day after the O.U., an umbrella Orthodox group, hosted a speech by Attorney General Jeff Sessions, whose department pledged to strictly enforce the family separation policy.

“As an Orthodox Jewish organization whose values are anchored in those of the Torah and Jewish history, we are deeply concerned about any steps taken that affect families and the parent/child relationship,” read the statement by O.U. President Moishe Bane issued Thursday evening. “Thus, we believe that immigration, asylum and border security policies must also be fashioned and implemented in a manner that takes all steps possible to keep parents and children united.”

Under the policy implemented in recent months, every illegal migrant who crosses the United States border is prosecuted and detained. Because children cannot be prosecuted with adults, they are reclassified as unaccompanied minors and taken away, either to mass children’s shelters or foster homes.

Religious groups across the spectrum, Jewish and not, have opposed the policy, and the O.U. is the most recent conservative religious organization to question it. It has been criticized in recent days by the Southern Baptist Convention, the U.S. Conference of Catholic Bishops and the Rev. Franklin Graham, the late Billy Graham’s son.

A day before the O.U. released the statement, on Wednesday, it hosted Sessions as the keynote speaker at its annual conference in Washington, D.C. Sessions’ speech largely concerned advancing religious freedom and preventing discrimination against houses of worship.

Facing criticism for hosting Sessions, the O.U. defended the invitation as the method that “will likely yield the greatest influence” regarding Sessions’ policies. It also praised Sessions’ remarks on religious liberty, for which it has advocated in the past. The statement noted that O.U. leadership met with Sessions privately and discussed the family separation policy.

After his speech, the O.U. presented Sessions with a plaque displaying the biblical verse “Justice, justice shall you pursue.” The statement said the plaque was meant “to direct us that the goal of justice must be pursued with means that are themselves just.”

Ahead of Sessions’ speech Wednesday, the liberal rabbinic human rights organization T’ruah put out a petition asking the O.U. to challenge Sessions’ immigration policies, including family separation. The petition garnered over 1,500 signatures, including more than 100 members of O.U. synagogues, among them a handful of rabbis.

On Thursday, 26 Jewish groups, including the three other major Jewish religious movements, signed a letter opposing the family separation policy. The statement was organized by the Anti-Defamation League and Jewish Council for Public Affairs.

“This policy undermines the values of our nation and jeopardizes the safety and well-being of thousands of people,” the letter says. “As Jews, we understand the plight of being an immigrant fleeing violence and oppression. We believe that the United States is a nation of immigrants and how we treat the stranger reflects on the moral values and ideals of this nation.”