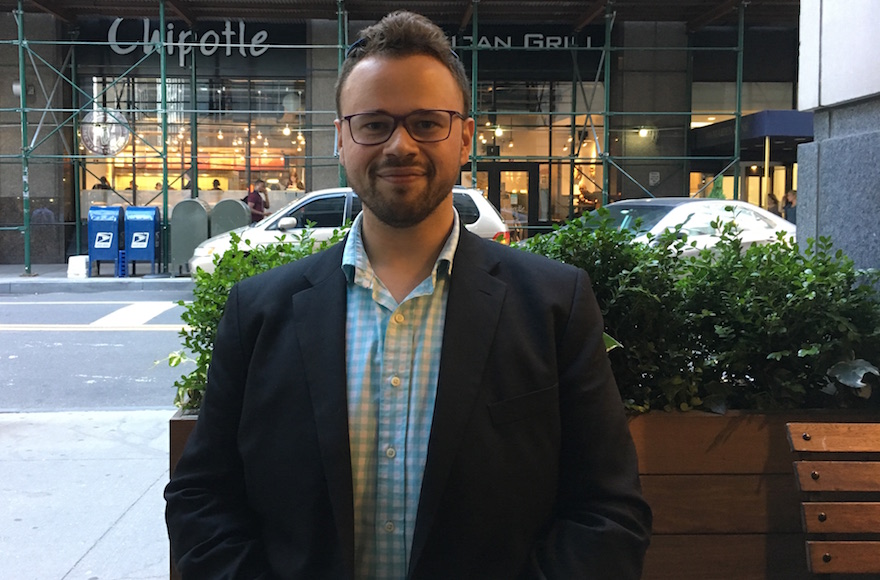 NEW YORK (JTA) — Growing up in the Orthodox community of Monsey, New York, as the son of an African-American mother who converted to Judaism and a white Ashkenazi father who became religious later in life, Isaiah Rothstein knows what it’s like not to fit in. The New York hamlet is known for its large Hasidic Jewish population and over 95 percent of its residents are white.

Rothstein, who is light skinned and says he tends to “pass for white,” remembers the unwanted attention he got in school because of his family background.

“When I would walk in with my mom I would get all these stares, but when I walked in with my dad I didn’t,” he recalled.

Though his family was affiliated with the Chabad Hasidic movement, he often felt like an outsider as a person of color.

“I often joke that it’s a very diverse place if you’re Ashkenazi and Orthodox,” Rothstein, 29, said of his hometown in an interview with JTA last month.

But the challenges he faced as a child in insular Monsey also motivated Rothstein to help create a different Jewish community for others.

Rothstein, who today identifies as Modern Orthodox and was ordained as a rabbi by Yeshiva University’s Rabbi Isaac Elchanan Theological Seminary, founded Union Street Sanctuary in Brooklyn last August. He previously was a co-founder of the Beis Community, a progressive Orthodox community in Washington Heights.

Though the Beis Community is a synagogue, the Union Street Sanctuary is a social organization only, hosting events such as Shabbat dinners, barbecues and open mic nights. Most attendees are millennials and about 60 percent are Orthodox.

One of Rothstein’s goals is to create an inclusive place for people regardless of their ethnic or racial background, religious beliefs, sexual orientation or other things that could make them feel like outsiders in other Jewish communities.

“Everything about how I was raised led me to my work on some level,” he said over smoothies at a juice bar in Lower Manhattan’s Financial District.

The shared motto of the Union Street Sanctuary and the Beis Community — “All are welcome, always” — exemplifies that commitment.

The programming and its attendees reflect that attitude, Rothstein said.

Attendees at a recent barbecue event included Jews across the spectrum, from haredi Orthodox to unaffiliated, as well as Jews of varying racial and ethnic backgrounds and ages, he said. The Union Street Sanctuary hosts meet-ups for Jews of color.

“Being welcoming isn’t just what we try to do in our programs, it’s what we are as an organization,” Rothstein said.

In addition to his work at the Union Street Sanctuary, Rothstein also serves as rabbi-in-residence for Be’chol Lashon, an organization that promotes Jewish diversity, and Hazon, a Jewish environmental group. He was invited to attend the ROI Summit, a gathering of young Jewish innovators in Jerusalem in June. He also plays the guitar and sings in Zayah, a musical collective he founded that plays Jewish-inspired rock and reggae.

Rothstein also strives to be inclusive of any rituals performed at events. He will perform  kiddush or Havdalah, for example, but then invite anyone else, including women, to make their own blessings afterward. There are different interpretations about women performing such rituals, with most Orthodox Jews believing that a woman cannot fulfill the Jewish legal obligations reserved for men.

Though there may be ritual elements like these at the Union Street Sanctuary, it does not host services and is not intended to replace the function of a synagogue, Rothstein said.

“We see ourselves as filling that gap between social programming devoid of spirituality and religion,” he said. “We want to include our ancestral texts of Judaism, we want to include that spirituality, but we do it in a way that doesn’t do the same things that maybe a synagogue would do.”

Rothstein estimated that approximately 200 people have attended events since its founding in August.

He hopes that with Union Street Sanctuary, he can help more Jews find a home. Rothstein felt like an outsider based on his racial background, but said that many others feel similarly for other reasons.

“I think it is something that is rampant in the Jewish world today of people not being able to have a solid sense that they are truly a part of the community,” he said. “It can be based on not just fitting into the classic mold.”