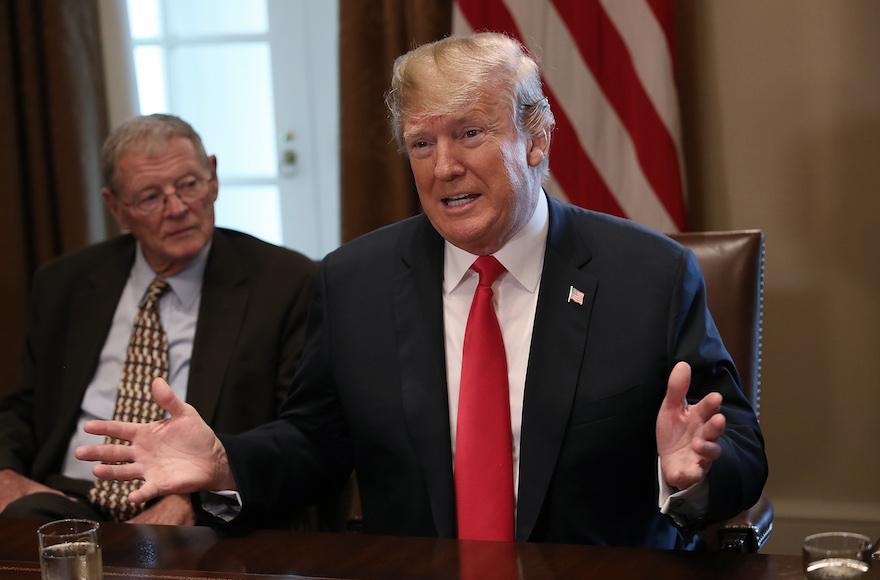 President Donald Trump speaking in the Cabinet Room of the White House before signing an executive order ending the policy of separating migrant children from their parents at the border, June 20, 2018. (Win McNamee/Getty Images)
Advertisement

(JTA) — President Donald Trump signed an executive order that will end the separation of migrant families on the southern U.S. border.

The order, signed Wednesday, will lead instead to families being detained together as adults are criminally prosecuted for crossing the border. More than 2,000 children have been separated from their parents since the policy was implemented in early May.

The move comes after overwhelming opposition to the family separation policy, including from a broad spectrum of Jewish organizations. Critics of the policy said that separating children, including babies, from their parents is cruel and traumatizing. Criticism of the policy mounted in recent days as reports and images of caged detention centers for children spread across social media, along with an audio recording of young children crying for their parents.

A diverse coalition of 27 Jewish groups sent an open letter last week to Attorney General Jeff Sessions, whose department instituted the policy, saying it “undermines the values of our nation and jeopardizes the safety and well-being of thousands of people.”

In a rare unanimity, the letter was signed by the leading organizations of all four major American Jewish religious denominations. The Orthodox Union signed the letter two days after hosting Sessions at an annual conference.

But it is unclear how the government will detain children and parents together, as a court order forbids long-term detention of children — something President Barack Obama also attempted. In its statement on the executive order, Jewish refugee aid organization HIAS criticized the new policy as well as the old.

“Transitioning from the cruel and inhumane policy of family separation to the cruel and inhumane policy of indefinite family detention cannot be the solution here,” read the statement by HIAS President Mark Hetfield. “Children do not belong in prison. As we learned during the last administration, there is simply no good way to do family detention.”

Previously, Trump and his cabinet members had defended the policy as a way to enforce the law and deter illegal immigration, and the president denied, implausibly, that he had the power to alter it. Upon signing the order, Trump said that retreating from the policy will not compromise border security.

“We’re going to have strong, very strong borders but we are going to keep the families together,” Trump said Wednesday, according to the New York Times. “I didn’t like the sight or the feeling of families being separated.”

His decision reportedly came after his daughter and adviser, Ivanka Trump, appealed to him to change the policy. Ivanka Trump thanked her father on Twitter for the executive order ending the policy he had instituted last month.

Thank you @POTUS for taking critical action ending family separation at our border. Congress must now act + find a lasting solution that is consistent with our shared values;the same values that so many come here seeking as they endeavor to create a better life for their families