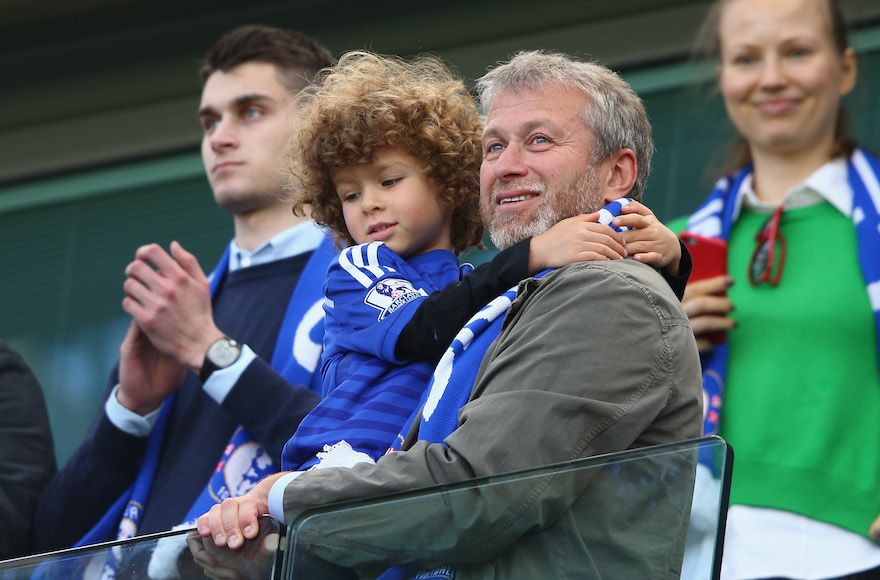 Roman Abramovich looking on after Chelsea won a match with Crystal Palace at Stamford Bridge in London, May 3, 2015. (Clive Mason/Getty Images)
Advertisement

(JTA) — Despite Israel’s absence from the World Cup, many Israelis are intensely following this year’s tournament in Russia. Some of these fans, thanks to Russian Jewish billionaire Roman Abramovich, have been given the opportunity to attend the Cup.

Abramovich, an investor and entrepreneur who owns England’s Chelsea soccer team, has donated a six-figure sum to the Israeli “Fulfilling Dreams” charity, which takes children with serious illnesses to major soccer tournaments across the world. The organization was founded and continues to be run by U.K. native Gilad Salter. Abramovich, according to reports, learned about the charity from his friend and former Chelsea manager Avram Grant.

According to CNN, Ambramovich’s and others’ donations have funded flights from Israel to Russia, hotels and food throughout the weeklong stay.

“We at Fulfilling Dreams are so grateful to all our donors, especially Mr. Roman Abramovich, for their tremendous generosity,” Salter told From The Grapevine. “All the months of hard work and organization become completely worth it when I see the happiness on these wonderful kids’ faces.”

“I’m having the time of my life,” nine-year-old Polina Feldman, who suffers from cerebral palsy, told CNN. “I’ve never been abroad before, and football is my life.”

According to The Jerusalem Post, many of these children were slated to attend the Israel-Argentina friendly that was canceled just before the Cup started this month.

The Chelsea owner was Russia’s 11th-richest man with a net worth of $10.8 billion. Following difficulties securing a visa to enter the U.K., Abramovich, who is Jewish, recently pursued and received Israeli citizenship.

He was born to Jewish parents in Lithuania but raised in Russia.