They tried to take Judaism out of synagogue spaces. Now they’re coming back to them. 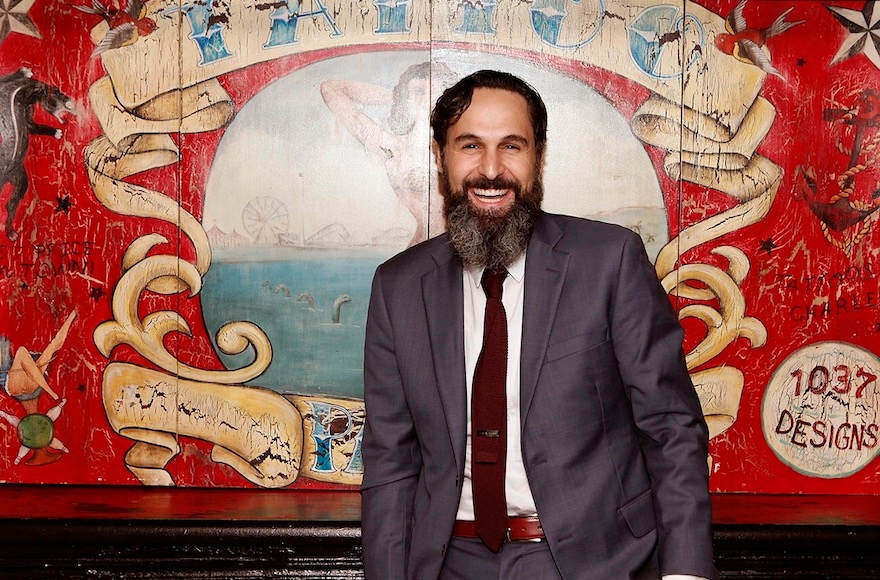 Rabbi Dan Ain is taking a synagogue pulpit in San Francisco after a decade of creating Jewish programming outside of a synagogue space in New York City. (Courtesy of Ain)
Advertisement

NEW YORK (JTA) — For 10 years, Rabbi Dan Ain has tried to take Judaism out of the synagogue.

He’s convened Friday night prayers in auditoriums with musicians like Matisyahu and Lisa Loeb. He’s held Rosh Hashanah services in a bowling alley/concert venue. He scheduled an interview earlier this month at an artisanal coffee shop in Brooklyn and showed up in a T-shirt and backward baseball cap, his long hair spilling out of the sides above his long salt-and-pepper beard.

Ain became a rabbi because he felt like the synagogue model was old and tired. Just this month, he compared the typical American Saturday morning prayer service to “a Civil War reenactment.”

“They’re dressed in the right clothing, they’re saying the same words that were said in 1863 in exactly the right ways,” he said. “But there’s no stakes involved, there’s no danger in their hearts. And for a lot of people services can feel like that.”

Which is why it may be surprising that on Sunday, Dan Ain will become the pulpit rabbi of Congregation Beth Sholom, a Conservative synagogue in San Francisco founded nearly a century ago.

To Ain, it’s not a contradiction. He is proud of the independent Jewish programs he built in Brooklyn and downtown Manhattan. But as he’s had kids and watched the world change since 2016, he says that he recognizes the need for stability, a reliable community and, yes, physical permanence.

An organization that holds Shabbat services with the lead singer of Guster may create a moving musical experience. But Ain knows that you can’t count on it if you need to say a daily Kaddish, the mourning prayer, for a dead parent.

“I was always in the back of my mind desiring of a community in which I could have a shiva minyan for people,” he said, referring to prayer groups that gather in the houses of mourners. “The ability to do stuff over a long period of time is something I haven’t had the opportunity to do because everything I’ve been doing goes up and comes down.”

Ain is one of several pioneers of independent Jewish communities who have, in one way or another, inched back toward the synagogue model they once rejected. About 15 years ago, a series of Jewish groups that began springing up thought the synagogue was not responding to their spiritual and ritual needs.

They differed in their nature but shared a few common themes: They did not have a permanent physical space; they did not affiliate with a Jewish denomination; and they did not charge annual membership dues. While some were founded by rabbis, others eschewed the idea of paid clergy. Many, though not all, were created by alumni of Conservative institutions.

Several have found success, like Ain’s Brooklyn organization, Because Jewish, which was founded in 2015. Manhattan’s Kehilat Hadar, one of the first independent minyans, or prayer groups, is in its 18th year, and its founders are among the thought leaders of a wave of egalitarian, traditionally committed Jews. Ikar, a Los Angeles community, is 14 years old. Its rabbi, Sharon Brous, gave an invocation at President Barack Obama’s second inauguration.

But those once-scrappy initiatives are adopting traditional trappings. Ikar has a physical building like other large, liberal Jewish houses of worship. Hadar just instituted membership and a board. Ain has departed his organization for a pulpit. The leaders of these communities say the move toward institutionalism isn’t a betrayal of their founding principles, just a necessary response to what their organizations or they themselves need.

“When we started, it was a scrappy startup, and I can no longer describe it that way,” Brous, who was ordained at the Conservative Jewish Theological Seminary, said of Ikar. “People ask me, with a building, aren’t you going to be a regular synagogue? And I’m not worried about it at all.

“We’re really a question-driven and idea-driven community. The building is just driving us to ask these questions with greater urgency.” 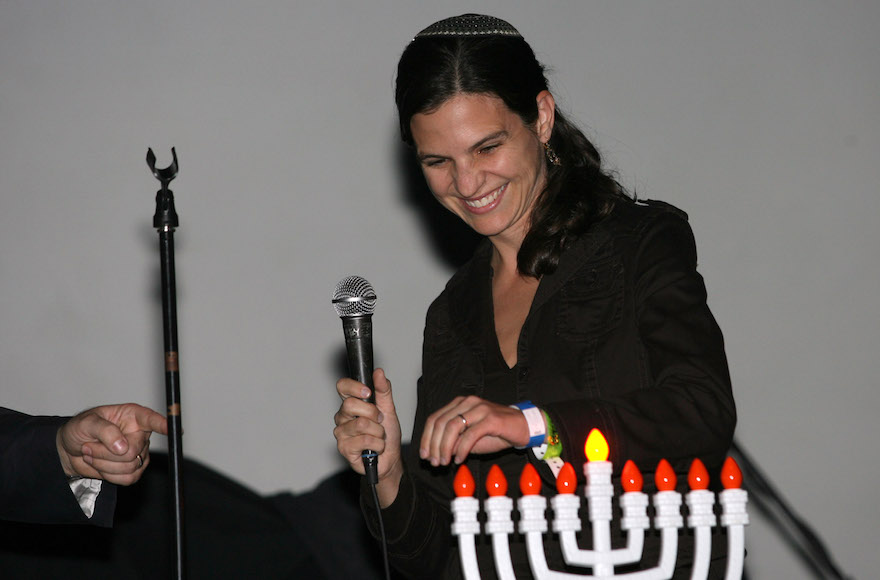 Rabbi Sharon Brous at an event at the El Rey Theater in Hollywood, Calif., in 2006. (M. Phillips/WireImage for Evolutionary Media Group)

When Ikar was founded in 2004, it held events and services in cafes, bars and private homes with a focus on drawing in unaffiliated Jews. It remains unaffiliated, but is now constructing its own building. Brous is also currently leading the community’s second annual mission to Israel — a staple of traditional synagogues. Ikar employs a large staff for its services, programs and preschool.

It has also joined with six other independent communities (including one Renewal Judaism congregation) to form the Jewish Emergent Network. The network — with congregations from Seattle to Chicago to Washington, D.C. — is not a traditional movement like Conservative, Reform or Orthodox Judaism, Brous says. Its member congregations differ in ideology, but collaborate on fundraising and resources. And Ikar in particular, she says, is still defined by the ideas and priorities that animate it, not where it meets.

“What we learned early on is that a lot of the successes and best practices of how to engage people in Jewish life were inaccessible or missing,” Brous said. “People are even more desperate to find a way for their Jewish tradition and faith community to help them make sense of what it means to be an American, to be a Jew.”

One of the founders of Hadar, Rabbi Elie Kaunfer, says it makes sense that older independent communities are seeking permanence as they expand. In many cases, he says, young prayer groups don’t have a building simply because they cannot afford one.

“Having a building is about the benefits of having a space you control, which does track onto organizational maturity and the next stage of growth,” said Kaunfer, who wrote the book “Empowered Judaism: What Independent Minyanim Can Teach Us about Building Vibrant Jewish Communities.” “Having a building or a permanent space is not an ideological step. It’s a practical step.”

Earlier this year, Hadar created a formal nonprofit board and membership structure based on either annual dues or a certain amount of volunteering. It has been meeting weekly in the same space, a Conservative Jewish day school, since 2011. Once populated largely by recent college graduates, it is now creating more structured children’s programming — including paid babysitting every week, a regular children’s service and early dinner for kids when the community meets on Friday nights.

But the new board president, Emily Scharfman, notes that the group still does not have clergy or paid staff of any kind.

“Kehilat Hadar is deeply interested in feeling like a permanent davening community,” she said, using a Yiddish word for prayer. “I think that’s fundamentally and deeply important to all of us here. I don’t think wanting some kind of permanency and routine is the same as the old-fashioned synagogue model.”

In other cases, institutional concerns can lead to a successful prayer group shutting down. That’s what happened to Makom, an offshoot of a Dallas Conservative synagogue, Congregation Shearith Israel. Makom once counted 1,500 participants — a large number in a midsize Jewish community like Dallas. Makom was active from 2012 to 2015, and met for services in a loft space wallpapered with whiteboards that attendees were free to draw on before the event.

Differences with the synagogue led to Makom’s dissolving, and its founders, Danielle Rugoff and her husband, Rabbi David Singer, moved to San Diego, where Singer is a Hillel rabbi. But Rugoff says they are exploring a return to Dallas, where they could re-create Makom as a fully independent organization.

“There’s nothing out there for Conservative Jews that was relevant and compelling, that also was a space where Jews by choice, Reform Jews, interfaith couples, where people could come in and be able to really witness and feel a Judaism that was closer to something that they would practice,” she said, describing her impetus for co-founding Makom. “Talking about big ideas and the value of life and everything else Judaism can offer is something people want.”

For Ain, the choice to move from a bowling alley to a bimah is partly practical — fundraising was tough in Brooklyn — but it’s also ideological. He believed that by attracting a group of like-minded young people, he was missing out on the sometimes difficult but also intricate mosaic of a typical synagogue community. People may not agree on everything and they’ll come from different generations, he says, but they will be there both for bar/bat mitzvahs and funerals. The political polarization of the current era has only reinforced that notion for him.

“There’s a trend to silo ourselves,” he said. “I think there is a real reluctance for people to enter into synagogue life because of all of the meshugas that comes with community, all of the real intermingling of people and different personalities. But the fragmentation leaves people isolated and lonely.”

Ain, similar to Brous, says being a permanent and more traditional space will not necessarily have to mean letting go of experimental musical experiences, or even his penchant for meeting at a cafe in a T-shirt. Kaunfer also says that synagogues have adopted practices and melodies pioneered by the prayer groups.

Others still dislike the idea of permanence. If the second iteration of Makom does end up happening, Rugoff says, it will still appeal to people who are still looking for something other than what their parents’ synagogue has to offer.

“I don’t think Makom would ever become a brick-and-mortar synagogue,” she said. “I think we’re talking about people where the idea of membership doesn’t make sense to them. I built a community I wanted to raise my family in, and no matter where I go, I’ll be looking for that.”