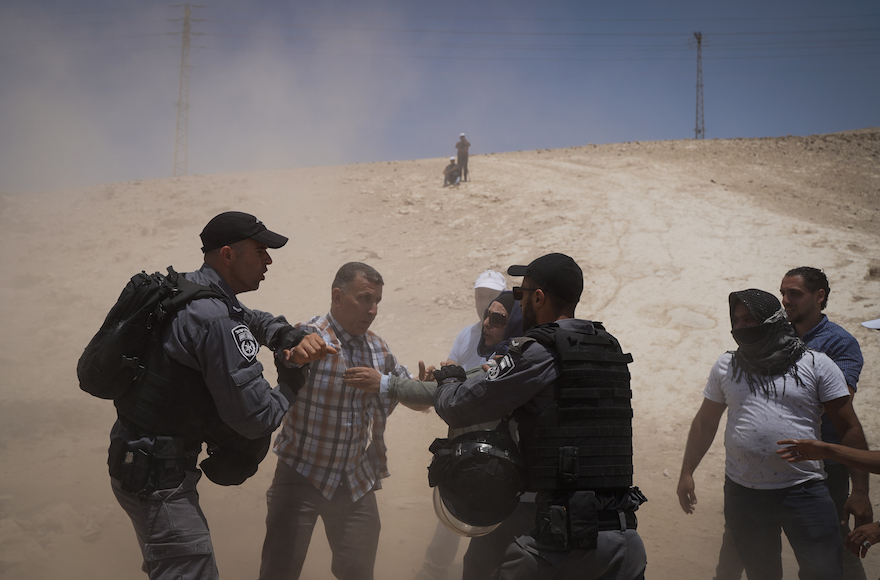 Police clash with activists at the Palestinian Bedouin village of Khan al-Ahmar, in the West Bank, as Israeli security forces began demolition of homes in the village, July 4, 2018. (Yaniv Nadav/Flash90)
Advertisement

JERUSALEM (JTA) — Diplomats from about a dozen European Union countries visited a Bedouin village in the West Bank slated for demolition.

They were prevented by Israeli forces, however, from visiting a school there built out of tires that was partially funded by the EU. The school is in area that the Israeli army’s Civil Administration turned into a closed military zone.

The village, Khan al-Ahmar, is slated for demolition in the coming days. It is located in the E-1 area of the West Bank east of Jerusalem. Israel has plans to eventually build homes in E-1, which is located next to the Israeli settlement of Maale Adumim. The area is needed to create a contiguous Palestinian state in eastern Jerusalem and the West Bank.

In May, Israel’s Supreme Court authorized the demolition of Khan al-Ahmar, since the homes were built without permits. About 180 residents live in the village.

On Wednesday, Israeli forces demolished illegally built structures in the nearby Bedouin village of Abu Nuwar. On the same day, 11 people were arrested during protests at Khan al-Ahmar. In addition, three police officers and 35 protesters were reported injured.

The following day, the Civil Administration made the area around Khan al-Ahmar a closed military zone through the end of July. Haaretz reported that the security forces will build a road to the village in order to evacuate it and thus the evacuation will not take place for several days or weeks.

The EU criticized the actions in a statement.

“These demolitions, together with plans for new settlement construction for Israelis in the same area, exacerbate threats to the viability of the two-state solution and further undermine prospects for a lasting peace,” it said.

“In line with our long-standing position on Israel’s settlement policy, illegal under international law, and actions taken in that context, such as forced transfers, evictions, demolitions and confiscations of homes, the EU expects the Israeli authorities to reverse these decisions and fully meet its obligations as an occupying power under International Humanitarian Law.”