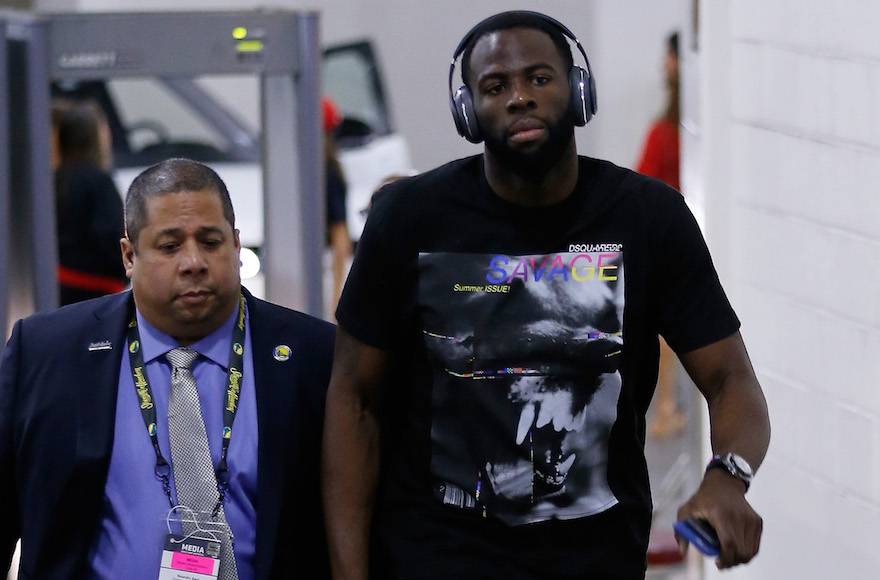 Draymond Green, right, shown before a playoff game between the Golden State Warriors and the Houston Rockets at the Toyota Center in Houston, May 28, 2018. The NBA star was criticized for posing with a gun during a recent trip to Israel. (Bob Levey/Getty Images)
Advertisement

(JTA) — NBA star Draymond Green on his recent visit to Israel got to meet the nation’s president and take some shooting practice — with guns, not basketballs — on a military base.

Draymond Green(@Money23Green) was a guest today of the Israeli SWAT Dep. pic.twitter.com/ze9Ubztv22

Dave Zirin of The Nation wrote a piece arguing that since the Golden State Warriors star refused to visit Donald Trump’s White House, he should have declined to join a trip organized by Friends of the Israel Defense Forces and rejected the invitation of President Reuven Rivlin, which Zirin interpreted as an implicit endorsement of Prime Minister Benjamin Netanyahu and his policies.

Citing Zirin’s piece, Hill wrote on Twitter that “it’s a contradiction to refuse a visit with Trump but to agree to one with the President of Israel. We cannot normalize either regime.”

King, also citing Zirin’s piece, wrote on Twitter: “Dear Draymond Green (@Money23Green), You got played. Flashing a toothy grin w/ a sniper rifle in Israel on a trip sponsored by Friends of the IDF is so horribly offensive. They’ve recently slaughtered 100s of unarmed Palestinians w/ those rifles.”

Such critics take it on faith that Israel’s policies toward the Palestinians are so egregious that it can’t be seen as anything less than a pariah state — a status they don’t bestow on any number of countries around the world, from Erdogan’s Turkey to Xi’s China.

Green isn’t the first celebrity to take heat for visiting Israel or planning to perform there. The singer Lorde recently pulled out of a scheduled concert after being pressured by activists. Radiohead, Boy George, Nick Cave and Morrissey all performed in Israel, rejecting calls from the Boycott, Divestment and Sanctions movement to cancel.

The BDS goal, it appears, is to “denormalize” the country — not just the policies of its elected government.

For many of the movement’s supporters, that means discounting political divisions within Israel itself.  The role of Israel’s president, for example, is ceremonial, and Rivlin and Netanyahu have engaged in a long-standing rivalry. Speaking to the Knesset last year, Rivlin criticized Netanyahu’s government, as The Jerusalem Post put it, “hinting that it was steering Israel away from the democratic values upon which the Jewish state was founded.”

Rivlin said that in Netanyahu’s government, he had witnessed a “continued effort to weaken the gatekeepers of Israeli democracy,” specifically referencing the prime minister’s treatment of “the relations between the legislative and judicial branches.”

Rivlin has also spoken up for Palestinians.

“Despite his unabashed nationalism,” Ricky Ben-David and Nira Yadin wrote in The Daily Beast, “he also may be Israel’s most vocal and highest-ranking critic of anti-Arab racism and discrimination, a province generally left to Arab and left-wing politicians.”

Friends of the IDF did Green no favors by having him pose for these militaristic photos mere months after deadly clashes on the Gaza border. But sports stars regularly visit troops in the U.S., and it is not seen as an endorsement of the commander in chief. All of the major sports leagues in the United States have promotional deals with the military.

Green himself aimed to keep the trip apolitical. His Israel visit was, if anything, an endorsement of the Jewish state’s right to exist and defend itself, not of its current government.

Jewish actress Natalie Portman also tried to make a distinction between supporting Israel and its people and supporting its elected government. When she canceled her visit to the Jewish state to accept the Genesis Prize, she explained that she did not want to share a stage with and thus appear to be endorsing Netanyahu. Portman emphatically denied that she was a BDS advocate.

“Like many Israelis and Jews around the world,” she wrote, “I can be critical of the leadership in Israel without wanting to boycott the entire nation.”

Yousef Munayyer, executive director of the U.S. Campaign for Palestinian Rights, wrote in the Forward that Portman was practicing BDS whether she admitted it or not.

“What you’ve done is send a message to Israel that their policies, which violate human and civil rights, are unconscionable,” he wrote, addressing Portman.

On the other side, Caroline Glick wrote in Breitbart News that Portman had helped those who want to denormalize Israel.

Some visitors to Israel want nothing to do with the left or the right.

A year ago, Radiohead frontman Thom Yorke explained to critics why the band would continue to perform there.

“Playing in a country isn’t the same as endorsing its government,” he wrote. “We’ve played in Israel for over 20 years through a succession of governments, some more liberal than others.

“As we have in America.

“We don’t endorse Netanyahu any more than Trump, but we still play in America.

“Music, art and academia is about crossing borders not building them, about open minds not closed ones, about shared humanity, dialogue and freedom of expression.”