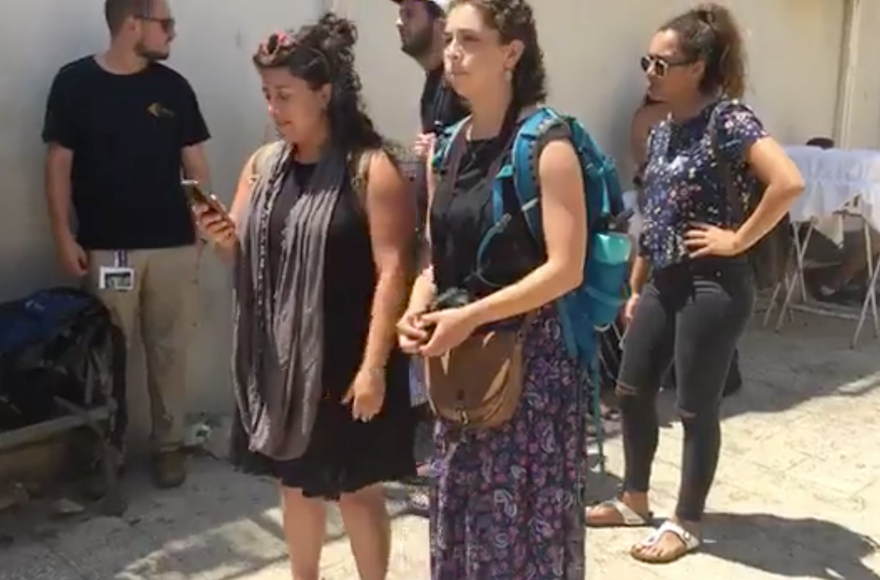 Some Birthright participants filming themselves talking about their reasons for leaving their trip earlier this month. (Screenshot from Facebook)
Advertisement

JERUSALEM (JTA) — A group of American Jews visiting Israel on a free Birthright trip walked off the tour during a visit to the City of David in Jerusalem to visit a Palestinian family who is facing eviction from their eastern Jerusalem home.

Six of the young people came from one Birthright tour and two joined them from a second group in the Sunday walk off.

One of the members of the group who walked off the tour live streamed the event on Facebook, including interviewing each of the members about their reasons for leaving Birthright.

It is the second group of young Jews to walk off a Birthright trip in the last two weeks. On June 28, five women affiliated with IfNotNow, a left-wing millennial Jewish group, walked off the last day of their Birthright trip to join a tour of the West Bank city of Hebron with Breaking the Silence.

“Birthright has refused to show us the truth about the occupation’s impact on Palestinians, instead asking us to visit a site operated by a far-right settlement organization,” a participant, Hal Rose, posted on Facebook. “We’ve decided instead to go meet with the Sumarin family, a family that has lived in East Jerusalem under threat of eviction for years to learn from them and hear their story.”

Any participant who “diverts from the tour’s itinerary without authorization” forfeits a $250 deposit and must pay for their flight home, Birthright said in a statement. The statement said that the free trips seek to encourage discussion on a range of issues but do not take political stances, and that they aim for participants to “connect with their Jewish identity and the diversity of Israeli society.”

“Our program provides educational enrichment and embraces thoughtful discussions on many subjects,” the statement said. “We will not allow this effort to be taken over by those motivated to engage in a political campaign given our commitment to providing a non-political educational experience.”

The group of Birthright participants, guided by Hagit Ofran of Peace Now, visited the Sumreen family whose home in eastern Jerusalem is said to have been purchased by Elad, an organization that also runs the City of David national park in the neighborhood of Silwan. Elad is expected to settle a Jewish family in the home if the Palestinian family is evicted.

After Israel declared the family home absentee property upon the death of the family patriarch, the house was to be sold to the Jewish National Fund on behalf of Elad, which is seeking the family’s eviction, according to Haaretz. The Sumreen family was unable to prove to an Israeli court that it owned the property.

Ofran told JTA she did not take part in coordinating the walkout, and arranged the tour of Silwan after receiving a phone call earlier in the day from the participants. After visiting the Sumreen family, the group visited an information center run by Palestinian residents of Silwan.

“I think they succeeded in doing a significant action, by bringing the subject of Silwan and the Sumreen family into the public discourse of the Jewish world,” Ofran told JTA Monday. “It’s the elephant in the room. It’s the most significant subject in Israel — the Israeli-Palestinian conflict and the occupation.”

Ofran said she believes in Birthright’s mission, but would like it to grapple with Israel’s treatment of the Palestinians more directly. She added that she is not an expert on Birthright’s curriculum.

“Israel is a part of world Jewry’s identity whether they want it or not, and therefore we’re part of a family, and I’m in favor of good connections in that regard,” she said. “They try to present Israel in a very shallow way and to create a good time for the participants without any engagement with complicated subjects, and essentially try to brainwash for a perspective that says Israel is right no matter what.”

Those who leave a Birthright tour cannot rejoin it. The eight who left their groups on Sunday planned to visit other places in eastern Jerusalem and the West Bank, including the Khal al-Amar Bedouin village that is planned to be demolished and a tour of Hebron with Breaking the Silence, Haaertz reported.