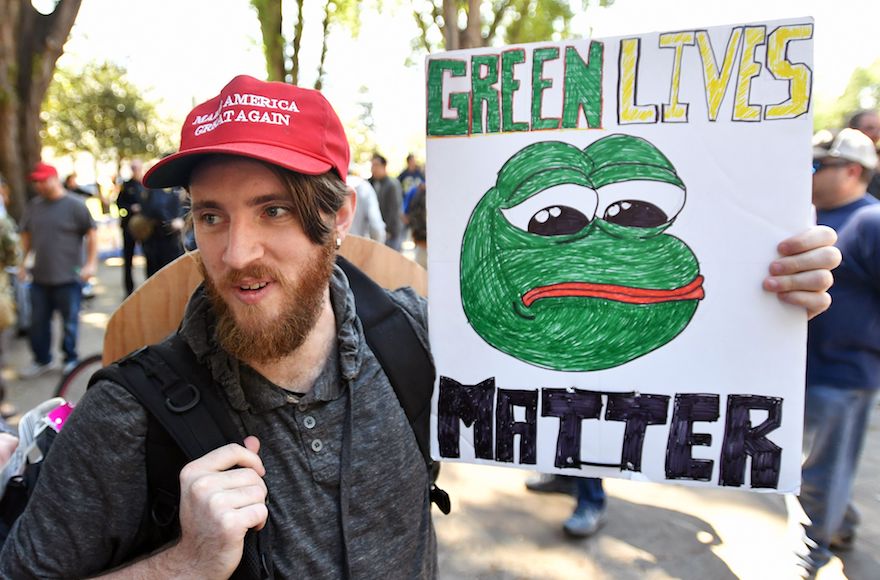 A man holds a sign with a Pepe the frog image at a rally in Berkeley, California, April 27, 2017. (Josh Edelson/AFP/Getty Images)
Advertisement

(JTA) — When cartoonist Matt Furie drew Pepe the Frog for a comic series, all he meant to do was create an amphibian pothead.

But the cartoon frog, with a chubby face and half-closed eyes, was appropriated by the “alt-right,” whose members turned him into a mascot for their far-right, racist beliefs.

Now Furie is fighting to take Pepe back — and he’s winning.

The Daily Stormer, a popular neo-Nazi site, has taken down 90 percent of the 40 Pepe images it posted after Furie’s lawyers sent it copyright violation notices. The task was made harder because the website has moved to the “dark web,” a shadow internet, and kept getting shut down and hacked, according to Motherboard.

“The Daily Stormer has been a bit of an annoyance, frankly,” Louis Tompros, a lawyer on the case at the firm WilmerHale, told Motherboard. “For reasons separate and apart from copyright infringement, [The Daily Stormer has] been rejected and shut down by a variety of different ISPs over time.”

According to Motherboard, Furie also successfully stopped publication of “Pepe and Pede,” an alt-right children’s book that used Pepe’s image. And he’s requested that white supremacist Richard Spencer stop using the image of the frog.

Last year, in an attempt to stop the alt-right’s Pepe use, Furie drew a comic strip that depicted the frog’s death.

Anti-immigrant and white supremacist, maybe. But is the alt-right anti-Semitic?