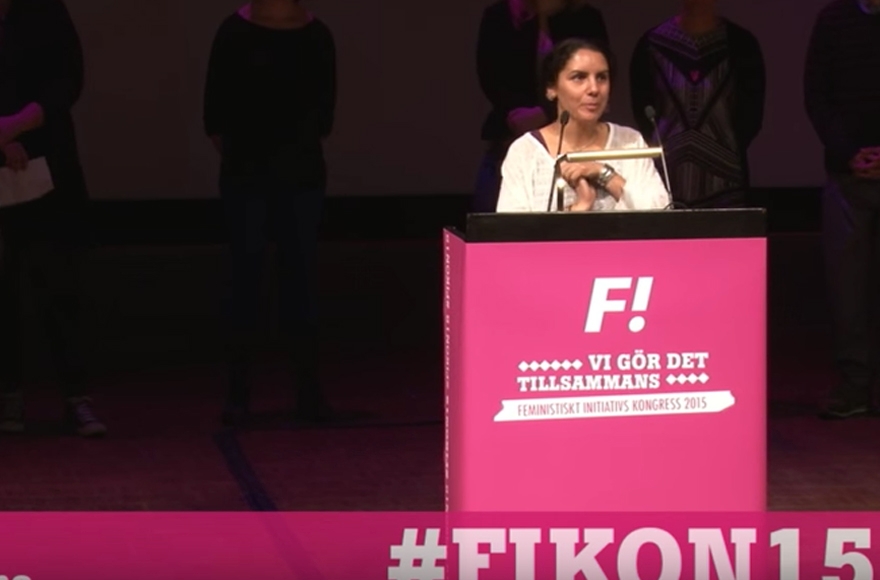 (JTA) — A candidate for the Swedish parliament retracted her idea offered in an interview of transferring Israeli Jews to the United States to achieve peace because the notion might be “misinterpreted.”

Oldoz Javidi, an actor with Iranian roots who is a candidate for the Feminist Initiative party, said Tuesday that she had requested the retraction of the passage from an interview published Friday by the Feministiskt Perspektiv website.

“My unofficial opinion as an individual is a bit more fantasy based,” she said in the interview, which she gave while sailing with other pro-Palestinian activists in the direction of Gaza. She accused Israel of “stealing land” and livelihood from Palestinians and the United States of doing the same, presumably to Native Americans.

“So why not invite their friends over to their land and make room for them on the farm?” she wrote of Israeli Jews and Americans. “They seem to enjoy each other’s company. And the Palestinians can live in peace and again build up the country that once was theirs. I can allow myself at least get a dream about such a solution, right?”

But on Tuesday, Javidi wrote on Facebook: “I have asked FemPers to remove the last quote in the current article because it does not in any way express the policy of Feminist Initiative, nor was it a proposal for a political solution, but a fantasy that I now understand could be misinterpreted or misunderstood.”

“Moving Jews against their will to solve a problem? Sounds like a final solution to me. Solid feminist politics,” Annika Hernroth-Rothstein, a pro-Israel Swedish activist, wrote on Facebook.

The Ship to Gaza aboard which Javidi is sailing is an attempt to break Israel’s blockade of the Gaza Strip, which is run by the Hamas terrorist group. Dozens of activists are participating in the sail, which is expected to be intercepted and redirected in the coming weeks by the Israeli Navy if it approaches the blockaded area.