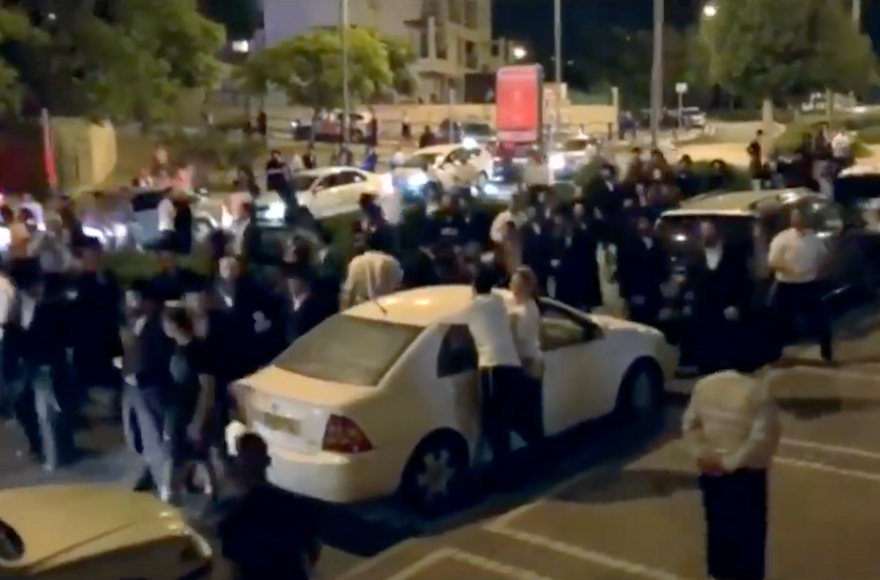 JERUSALEM (JTA) — A haredi Orthodox mob chased a teenage girl down a main thoroughfare in the Jerusalem suburb of Beit Shemesh due to her “immodest” attire.

City residents have been complaining about religiously motivated violence in the Ramat Beit Shemesh Bet neighborhood outside Jerusalem for years. Extremists there frequently clash with police attempting to remove signs calling for public gender segregation.

In a video of Monday’s incident, the girl can be seen running down Nahar Hayarden Street, chased by what appears to be dozens of screaming men in haredi Orthodox garb. Some residents of the neighborhood have complained that they have been harassed and pushed to leave the neighborhood by the extremists, who recently announced a “war” on formerly haredi residents who frequent the neighborhood.

In response to the attack, dozens of secular and national-religious residents held a rally Tuesday protesting the lack of security.

“In one of the neighborhoods, every time I pass through to go to work the children throw stones at me because I am not dressed modestly,” one demonstrator told Walla News.

On Wednesday evening 150 extremists demonstrated outside of the homes of two families affiliated with the Chabad hasidic movement, demanding that they move out. “They have big dogs that they walk around with in the street, they deliberately chase children with them and frighten them, they intentionally defile this neighborhood and we want them to go somewhere else,” the Ynet news site quoted one protester as saying. The Chabad movement draws the extremists’ ire because of their outreach to the non-haredi world.

Deputy Education Minister Meir Porush’s car was mobbed in Beit Shemesh in April. Several months earlier a soldier driving through the city crashed into a lamppost after his car was pelted with stones and trash. Last month, a local extremist was arrested for breaking a woman’s iPhone.

Many Israelis consider Beit Shemesh a microcosm of the religious kulturkampf being waged across the country. The city rose to national prominence in 2011 when local extremists began harassing and spitting on young national-religious girls attending a school on territory they claimed belonged to the haredi community.