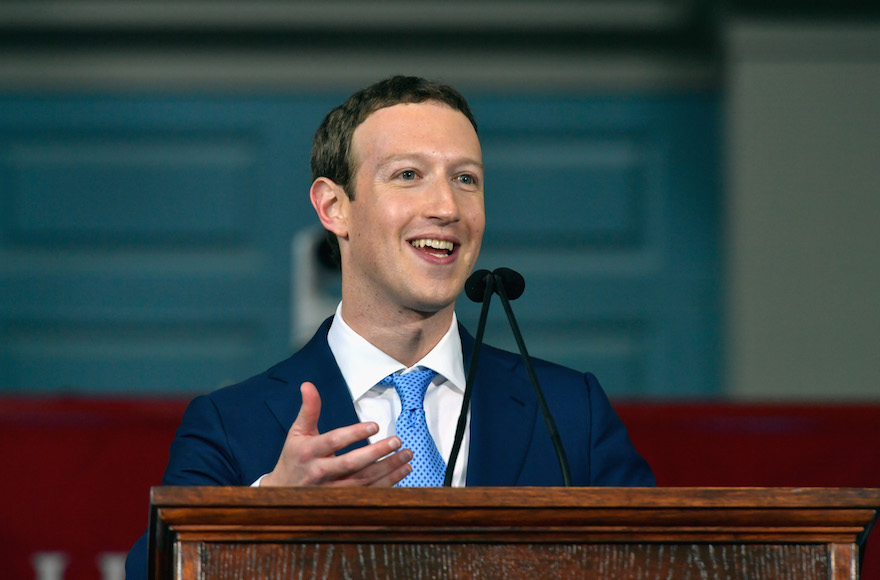 Mark Zuckerberg delivering a commencement speech at Harvard University, in Cambridge, Mass., May 25, 2017. He quoted the "Mi Shebeirach" prayer in his speech. (Paul Marotta/Getty Images)
Advertisement

(JTA) – Mark Zuckerberg clarified remarks he made in an interview published online in which he said that he would not automatically remove Holocaust-denying posts from Facebook.

The remarks by Zuckerberg, the founder and chief executive of Facebook, in an interview with tech journalist Kara Swisher published on the Recode website, were widely covered by journalists and debated on social media.

Hours after the interview went live on the Recode Decode podcast and a transcript was published on the website, Zuckerberg sent an email to Swisher to clear up any misconceptions.

“I enjoyed our conversation yesterday, but there’s one thing I want to clear up. I personally find Holocaust denial deeply offensive, and I absolutely didn’t intend to defend the intent of people who deny that,” Zuckerberg wrote.

“Our goal with fake news is not to prevent anyone from saying something untrue — but to stop fake news and misinformation spreading across our services. If something is spreading and is rated false by fact checkers, it would lose the vast majority of its distribution in News Feed. And of course if a post crossed line into advocating for violence or hate against a particular group, it would be removed.

“These issues are very challenging, but I believe that often the best way to fight offensive bad speech is with good speech,” Zuckerberg concluded.

He told Swisher that while Facebook would not remove a post denying the Holocaust, it would push the post down the News Feed to make sure it did not go viral.

News Feed is the display of items that greet a Facebook user when they access the service. The items can range from a personal update from a close friend to a widely shared news story or video.

“I’m Jewish, and there’s a set of people who deny that the Holocaust happened,” he told Swisher. “I find that deeply offensive. But at the end of the day, I don’t believe that our platform should take that down because I think there are things that different people get wrong. I don’t think that they’re intentionally getting it wrong, but I think …”

At that point, Swisher jumped in: “In the case of the Holocaust deniers, they might be, but go ahead.”

“It’s hard to impugn intent and to understand the intent,” Zuckerberg said. “I just don’t think that it is the right thing to say ‘We’re going to take someone off the platform if they get things wrong, even multiple times.’”