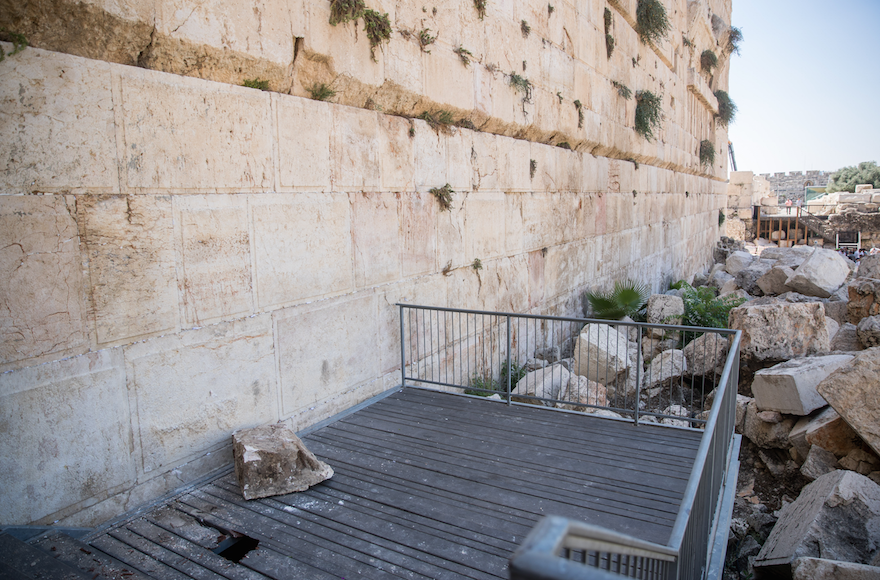 A large chunk of stone dislodged from the Western Wall at the mixed-gender prayer section in Jerusalem, Israel, July 23, 2018. (Yonatan Sindel/Flash90)
Advertisement

(JTA) – After a large stone fell from the Western Wall on Monday, an Israeli archaeologist declared the holy site’s entire plaza a “danger zone.”

Other stones “could immediately fall” and hurt people, Zachi Dvira told The Times of Israel. He is completing a Ph.D. on the archaeology of the Temple Mount.

The boulder that fell Monday morning at one of the sight’s areas designated for egalitarian mixed prayer weighed about 220 pounds, according to Israel Radio. It missed all onlookers but landed close to a female worshiper.

“I didn’t hear or feel anything until it landed right at my feet,” Daniella Goldberg, 79, told Hadashot TV news. She said that they “tried not to let the incident distract me from my prayers.”

Israel “doesn’t do proper preservation [of the site] because of politics,” Dvira said, arguing that the controversy surrounding the egalitarian prayer area has prevented the proper upkeep.

While the egalitarian section has been closed since the incident, he believes visitors should stand a few feet back from the wall in all of its sections, for safety reasons. He noted that several rocks from the Temple Mount’s other three supporting walls have fallen in recent years. The rock that fell Monday was broken in two from moisture created by the plants in the wall.

The Western Wall’s official rabbi weighed in on Monday’s event, noting it happened the day after Tisha B’Av, during which Jews mourn the historical destruction of the First and Second Temples.

“This is an unusual and most rare incident that has not occurred for decades,” said Rabbi Shmuel Rabinovitch. “The fact that this powerful incident happened a day after the 9th of Av fast, in which we mourned the destruction of our temples, raises questions which the human soul is too small to contain, and requires soul-searching.”