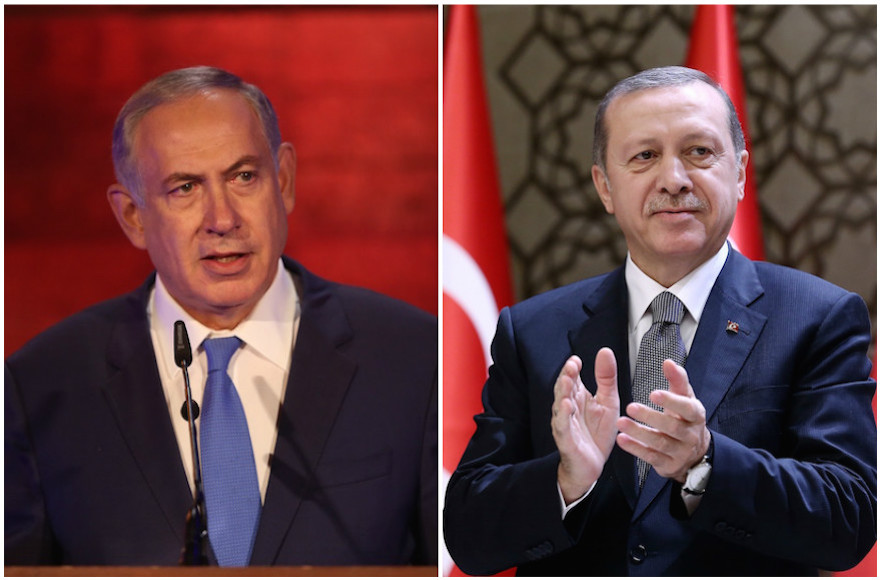 JERUSALEM (JTA) — Turkish President Recep Tayyip Erdogan said the “spirit of Hitler …  has found its resurgence among some of Israel’s leaders” in criticizing the country’s nation-state law.

“The Jewish Nation-State Law is proof, with no room for doubt, that Israel is the world’s most Zionist, fascist and racist state,” Erdogan said in a speech Tuesday to his ruling Justice and Development Party, or AKP. “This Israeli understanding is no different from Hitler’s search for a pure race.”

Shortly after Erdogan’s statements were reported and tweeted out by his office, Prime Minister Benjamin Netanyahu responded by calling the criticism a “compliment.”

“Erdogan is massacring Syrians and Kurds and has jailed tens of thousands of his citizens,” Netanyahu said in a statement. “The fact that the great ‘democrator’ Erdogan is attacking the Nation-State Law is the greatest compliment for this law.

“Turkey, under Erdogan’s rule, is becoming a dark dictatorship whereas Israel scrupulously maintains equal rights for all its citizens, both before and after the law.”

Erdogan last week accused Israel of apartheid in passing the legislation, which enshrines Israel as the nation-state of the Jewish people.

President Erdoğan: “The ‘Jewish Nation-State Law’ is the proof, with no room for doubt, of Israel’s being the most fascist and the most racist state in the world.

After this regulation, Israel has nothing left to say about fascism and racism as well as their repercussions.” pic.twitter.com/qQclQE2WSt