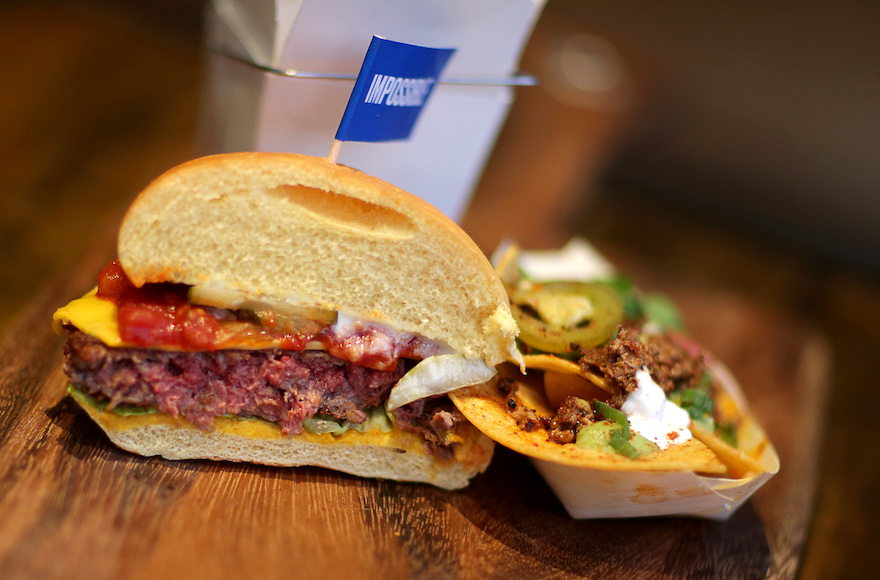 TEANECK, N.J. (JTA) — For many Americans, no hamburger is complete without cheese. Whether a slice of no-fuss American or something fancier, the cheese melds the beef patty with the bun into umami-laden perfection.

Until now, the cheeseburger was the stuff of daydreams for Jews observing kosher dietary laws that prohibit the mixing of meat and dairy. Sure, there are vegetarian meat substitutes and fake cheeses — made from ingredients such as black beans and brown rice, cashew nuts and soy — but the kosher cheeseburger remains a chimera.

The Impossible Burger is a vegetarian patty that has made waves for tasting and looking just like the real thing. It even “bleeds” just like a juicy burger thanks to heme, a protein that puts the hem- in hemoglobin. Impossible’s version is derived, it says, from the roots of soy plants.

In May, the Redwood City, California-based Impossible Foods announced that the burger, which launched in 2016 and is only available at restaurants, had been certified kosher. On Monday, it received another seal of approval as the Food and Drug Administration certified it as safe to eat after answering questions about the genetically engineered substance used to produce plant-based heme.

As the burger debuted at a cafe in New Jersey earlier this month, the patrons seemed impressed.

Ganz said she’s always been curious about what the non-kosher dish tastes like.

“I would try all of the varieties because I want to know what all the different types of cheeses taste like [with it]. It lives up to the hype, it really does,” she raved as she and her husband, Shmuli, 35, tried the Impossible Burger for the first time at Shelly’s Cafe in Teaneck. 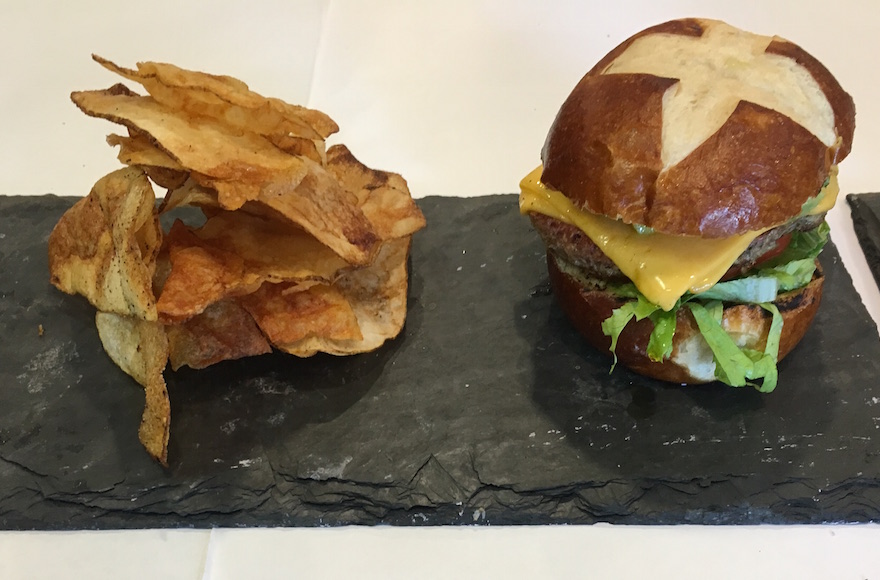 The Impossible Burger is served at Shelly’s Cafe in Teaneck, N.J., with cheddar, avocado, tomato, lettuce, sriracha mayonnaise and a side of homemade potato chips. (Josefin Dolsten)

This reporter (who has been known to eat an occasional cheeseburger) found the burger tasty and quite similar to the real thing. The meat was juicy, though perhaps a bit softer than regular beef, and paired well with cheese.

Noam Sokolow, who owns the kosher dairy restaurant with his wife, Shelly, said he typically serves only dishes made from scratch. He was willing to make an exception for the Impossible Burger.

“This gives us an opportunity to serve a kosher cheeseburger,” he said. “We’ve had kosher veggie cheese burgers and other types of substitutes, but the Impossible Burger is not just an ordinary veggie burger.”

Shelly’s Cafe has four variations of the burger on its menu — with Swiss, cheddar, cheese fondue and a no-cheese option.

The Orthodox Union, the largest kosher certifying agency in the United States, was “thrilled” to put its seal of approval on the Impossible Burger, said Rabbi Menachem Genack, CEO of the organization’s kosher division.

Approving the burger took only two months because many of its ingredients already were certified kosher, said Rabbi Yitchok Gutterman, who oversaw the process.

Though the burger is 100 percent kosher, a cheeseburger could raise questions of appearances. A Jewish legal concept known  “marit ayin” (literally, “apperance to the eye”) bans certain otherwise kosher actions that could appear to violate Jewish law. In the case of the Impossible Burger, an onlooker could see an observant Jew eating what looks like a genuine cheeseburger and assume that mixing meat and cheese is allowed.

But restaurants can deal with that by displaying a sign that says the burger is not made from meat, Genack told JTA.

Still, some observant Jews may gag at the mere idea of eating a cheeseburger, even if halachah, or Jewish law, says the non-meat option is OK.

“For people for whom kashrut and Jewish eating practices is a matter of identity as opposed to halachah, this is ironically more of a challenge,” said David Kraemer, a professor of Talmud and rabbinics at the Jewish Theological Seminary who has written about the history of Jewish eating and identity.

Ganz said she had no problem eating the burger with cheese because she was aware it was not real meat.

Shmuli Ganz said the unusual part was not having something that looked like meat together with cheese but the fact of eating “a non-meat burger.”

“That was weird,” he said. “Having it with the cheese was not weird.”

At Shelly’s Cafe, the burger is selling well, Sokolow said. On the night it was introduced, the burger sold around 50 units, which he called “an enormous amount of any one item.” The least expensive of the Impossible Burgers with cheese at Shelly’s goes for $22.95.

Gutterman, the rabbi who oversaw certifying the burger as kosher, said he has been flooded with questions asking about it.

“It’s incredibly popular,” he said. “Everybody is buying it!”