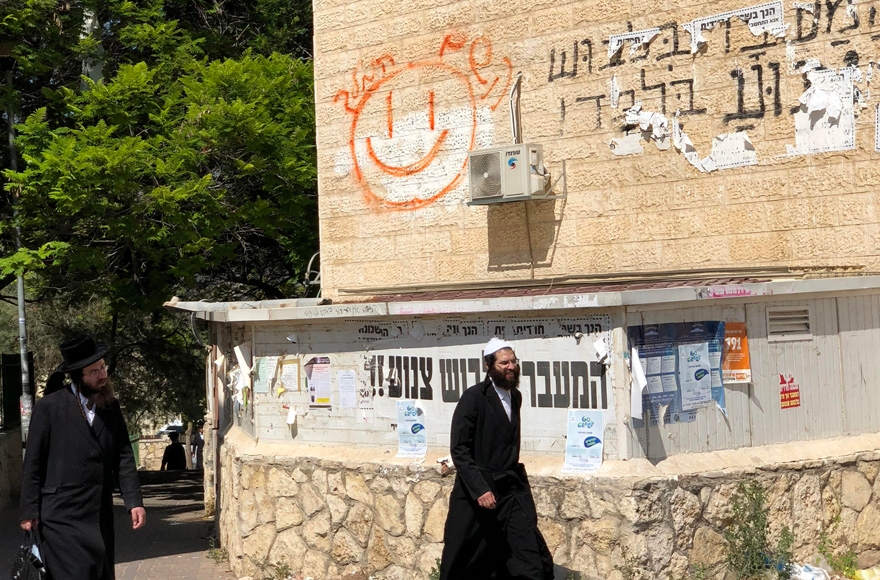 BEIT SHEMESH, Israel (JTA) — Built in the 1990s in part to ease crowding in haredi Orthodox neighborhoods elsewhere in Israel, Ramat Beit Shemesh Bet is both an Orthodox boom town and a site of ongoing tensions between different streams of religious Jews.

National-religious Jews have long complained of harassment by members of the haredi community, who style themselves as enforcers of strict codes for dress and conduct.

Now there is another front in the simmering battle: several dozen haredi dropouts, young men and women who shed their Orthodox identity in their teenage years and are rejected by many in their former communities.

Long simmering tensions between haredim and teenage dropouts recently erupted in violence, necessitating police intervention in a city known throughout Israel as a microcosm of the religious kulturkampf being waged across the country.

Most of the teens hang out in a shopping center on Rival Street, a few minutes walk from the more religiously moderate and Americanized Ramat Beit Shemesh Aleph.

On July 16, a haredi mob attacked a teenage girl. In a video of the incident posted online and shared widely on social media, the girl could be seen running down Nahar Hayarden, the neighborhood’s main thoroughfare, chased by what appears to be dozens of men in black hats and black coats who could be heard screaming about her allegedly immodest attire.

Less than a week later, shortly after the end of the Tisha b’Av fast, a second incident led to clashes between residents and several dozen teenagers who had gathered in the neighborhood. The police were called and several teens were arrested.

“I saw the girls come to the square and the extremists were here and suddenly I heard yelling and saw the haredim chasing the girls,” recalled Rudi, a 17-year-old dropout who hangs out on the corner of Rival Street. “The cops didn’t do anything. They call the cops every time we sit.”

Others had a different perspective on that evening.

“It was like a pogrom,” said Avner Steinhalt, one of the small number of non-haredi residents left in Ramat Beit Shemesh Bet. “It was one of the worst nights in this neighborhood.”

He recalled how tensions rose higher and higher during the days leading up to the Tisha b’Av fast day in July. Several days before the fast, a fight erupted between haredim and the teenagers, leading to the hospitalization of one of the teens. Finally, on the evening after the fast, some 60 young people gathered “to have revenge on the haredim.”

They found a small synagogue on Rival Street and “destroyed everything,” Steinhalt said. “Then they went out and started to hit some people in the road even though they did nothing.”

Videos of that evening posted online show a thin line of police separating howling mobs of teens and haredim. It wasn’t the first time. According to Steinhalt, a month and a half before the big Tisha b’Av brawl, the local “modesty patrol” attacked a group of teens hanging out outside a local falafel shop.

“The trigger that started it? They [the teens] had a dog — a small dog that barks — and they said something wrong to one of the ladies in the neighborhood and the husband came” and challenged them “and it escalated,” Steinhalt said.

While not afraid himself, Steinhalt said that his wife and daughters no longer walk alone at night because “they are afraid that something could happen to us.”

The teens can be aggressive, too.

“They [usually] sit on the bench there near the falafel place,” he said. “The main problem is shouting at night. They speak loudly and speak to girls, harassing the haredi girls passing by.”

The city, 19 miles west of Jerusalem, has long been known as a flashpoint. It rose to national prominence in 2011 when local extremists began harassing and spitting on young national-religious girls attending a school on territory they claimed belonged to the haredi community.

The differences between the camps may not be apparent to outsiders: Both are Orthodox, but haredi Orthodox tend to be more insular, non-Zionist and less forgiving of even slight deviations from their strict interpretation of Jewish law, including street attire. Haredi men, who are often but not exclusively members of various Hasidic movements, wear distinct black garb and hats. The women wear skirts, long-sleeve tops and head coverings that leave neither their hair nor much more than their hands and faces uncovered.

Deputy Education Minister Meir Porush’s car was mobbed in Ramat Beit Shemesh Bet in April. Several months earlier a soldier driving through the city crashed into a lamppost after his car was pelted with stones and trash. Last month, a local extremist was arrested for breaking a woman’s iPhone.

Haredi residents complain that the teens have caused problems, harassing local residents and making noise late into the night.

“Some families in the area don’t take care of their kids. They’re problematic,” said Alexander, a local Hasid who claimed that the teens have broken windows, scared children with dogs and “sit around and yell in public squares until 3 in the morning.”

“They cause both spiritual and material problems,” he said. “They don’t act haredi. People pay a lot to live in a haredi neighborhood and they don’t behave well or act haredi in the street.”

Moshe, a short Hasid with a bushy blond beard, agreed, telling JTA that residents have worked hard to create an environment free of smartphones and the internet. The teens, he said, sit around watching movies and showing what he believed to be inappropriate content to religious children.

“We are fighting for our neighborhood,” he said.

According to Shlomit Kapach, founder of U’Vneh, a group dedicated to family rehabilitation, the local municipality has hampered efforts to reach out to the city’s street kids. She accused the head of the local welfare department of refusing to refer young men to Meitar, a Welfare Ministry program run through her group that is aimed at providing them with activities and treatments. Eventually, Kapach said, she gave up on the city’s cooperation. 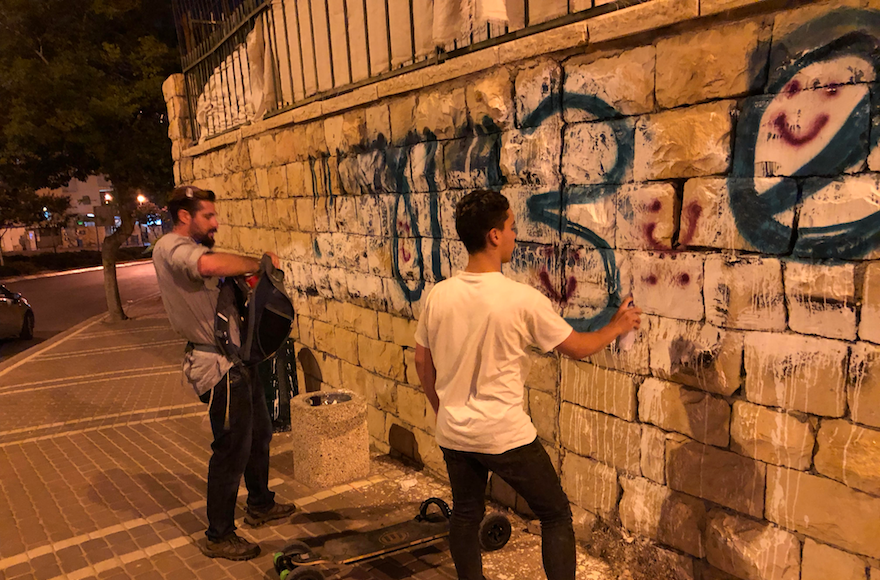 One of the primary teenage rioters in Ramat Beit Shemesh Bet was a former participant in her program, she said, describing him as “very broken” by the lack of continuing help.

“The continued decline to the street was an inevitable step,” Kapach said.

Down the block from Alexander and Moshe, Nachman, a young man wearing skinny jeans, a T-shirt and Hasidic sidelocks, sat on a bench outside the falafel store playing with his smartphone. He was skeptical of the Hasidic men’s claims.

“The extremists are looking for problems,” he said. “They are angry that there is a family with a dog. There are some teens who make problems that come here, but most are quiet.”

While the haredim claim that the teens are the biggest problem, some parents contend that the main issue is the extremists among the former.

Sivan Ruschinek is a member of the Chabad Hasidic movement who fled Ramat Beit Shemesh Bet two years ago after years of harassment by extremists. Hasidim from other movements would follow her daughters down the street screaming about modesty because the girls were wearing skirts they considered not long enough and declined to tie their hair in a ponytail.

“This went on for three years that they were harassing us. And each time it got worse and worse to the point that they put glue in our lock so we couldn’t close or open our door,” Ruschinek said. “They wrote on our entrance next to our door ‘get out of our neighborhood.’”

She recalled one incident in which an extremist behaved so aggressively that her 8-year-old daughter fainted in the street.

“We left to save our family and the sanity of the kids,” Ruschinek said.

“It was like going out of the house and feeling like I’m in Gaza,” Shaina said. “I don’t have words to tell you how bad it felt living there. There was always fear. The fear came out as soon as I went out the door. Will he scream at me or spit or hit or run after me? All the time.”

Since last month’s upheaval things have mostly calmed down, although the underlying tensions are still bubbling under the surface. Rudi, the 17-year-old dropout, believes it can be partly attributed to the vandalism of the synagogue. While he denied taking part in the incident, Rudi did voice a certain level of approval, stating that the haredim “now understand they can’t do what they want” with impunity.

According to Steinhalt, the non-haredi living in Ramat Beit Shemesh Bet, the local haredi-dominated municipality has “done nothing” for the teens, failing to engage them in programs that would get them off the street.

In a statement to JTA, Rozensweig asserted that “the residents of Beit Shemesh live with great security and quality of life,” and that the municipality was working “on a number of levels” to fix the problem, although he declined to offer any details.

“The problem isn’t haredim or Zionists,” he said. “It’s a problem between two ways of living, one in which we don’t want someone who isn’t like us and one where we welcome everyone even if he [doesn’t follow] in our ways.

“Most of the secular kids aren’t doing anything that bad,” Steinhalt said, “but even sitting on the street is bad” to the haredim.