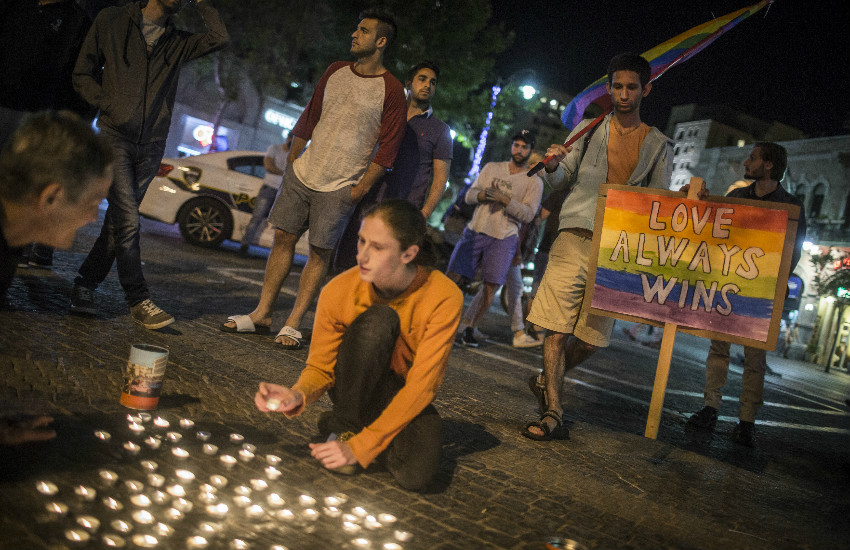 Young Israeli LGBT equality activists light candles at Zion Square in Jerusalem in solidarity with the victims of the shooting attack at Pulse,a gay night club in Orlando, Florida, on June 12, 2016, by an American of Afghan descent who claimed allegiance to ISIS. (Photo by Hadas Parush/Flash90)
Advertisement

TEL AVIV (JTA) — Some 2,000 young people marched in Tel Aviv to commemorate the ninth anniversary of the deadly shooting at the city’s Barnoar gay youth center and demand an end to discrimination against the LGBT community.

The 2009 attack was carried out by a lone gunman who killed two young people and wounded dozens more. The shooter was never caught.

Many in the LGBT community consider the shooting a hate crime, while police have speculated that it was motivated by a personal dispute rather than antipathy toward gays.

The organizers of Saturday’s march issued a statement bemoaning the lack of progress on LGBT rights made since the shooting.

“Nine years ago an armed man entered the Barnoar center and murdered boys and girls only because they were different,” the statement said. “Nine years have passed and not much has changed. In recent weeks there has been a public outcry against the inequality and discrimination of the LGBT community in Israel. We are calling to put a stop to the violence towards the LGBT community.”

Israel has led many Western nations in legally establishing equality for gay members of the armed services, extending financial rights to same-sex partners, promoting LGBT tourism and supporting gays in public life. It has lagged, however, on issues of personal and family status because marriage and related issues are largely dominated by the haredi Orthodox Chief Rabbinate and its political supporters.

Nitay Nedivi, a 19-year-old marcher doing his national service at the LGBT youth organization Iggy, told Ynet that the State of Israel “discriminates against the LGBT community.”

“The law makes it very difficult for people from a transgender community to undergo medical procedures, the connection between religion and state prohibits us from getting married, there is systematic discrimination towards same-sex couples,” he said. “The education system has almost no content on sex, gender, or anything else that deviates from their norm.”